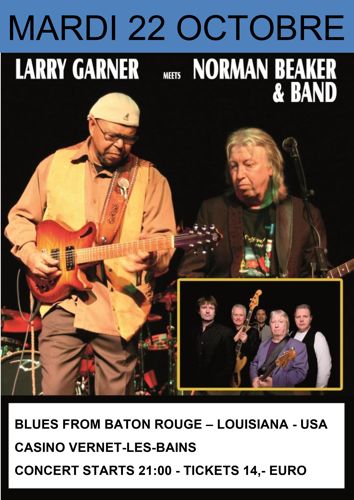 Blues Artiste Larry Garner is one of the great blues musicians touring the world today. A fine guitarist with a wonderfully expressive voice he…..

His powerful vocals and expressive musicianship make him a natural front man, his songs are delivered with a sense of irony with lyrics that are both meaningful and amusing –  a wonderfully expressive voice,  a fine guitarist and a great performer.

In British blues veteran Norman Beaker,  Larry Garner has found a true musical soul mate.
The Norman Beaker Band have been at the forefront of the UK contemporary blues scene for over 3 decades working with a who’s who of blues stars including BB King,  Chris Farlowe, Jack Bruce,  Chuck Berry, Paul Jones, Eric Burdon,  and Van Morrison to name just a few.