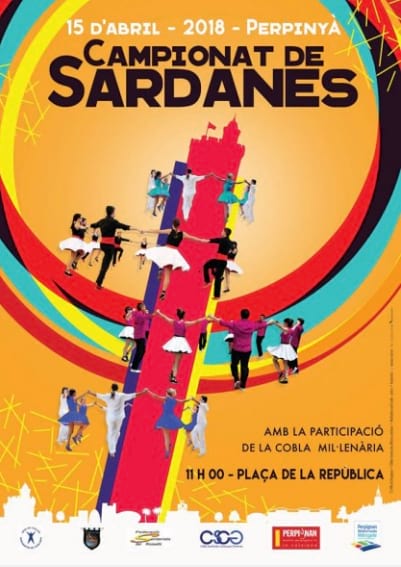 ‘Colles’ from all over Catalonia meet up once a year in Perpignan for the ultimate ‘dance off’.

Whether you’re a vigatine veteran or a total novice, the place de la République is the perfect spot to enjoy or coffee or a tipple and marvel at the technique and energy required to perform this tradtional Catalan circle dance.

The first « ballada » will take place at  11am in the place de la République and the action will continue from there.  If it rains, the whole thing will move to the Parc des expositions ” Satellite ”

This traditional Catalan circle dance, believed to be of Greek origin, was designed to bring whole villages out into the streets, and get them in party mood – a little like a more complicated version of the ’hokey cokey’!

Music for the sardane is played by a cobla, a wind band consisting of 11 instruments and a double bass. Four of these instruments (tenora, tible, flabiol and tamborí) are typical Catalan instruments along with the more traditional trumpet, trombone, fiscorn and double bass. The makeup of a cobla never varies.

He resented the Catalan national pride and desire for independence and considered it  to be arrogant. He therefore enforced bans against certain aspects of Catalan culture, language and heritage, to force the Catalans to conform with the rest of Spain.

Not for the first time, the speaking of Catalan was banned. So was the Sardane. In a paranoid country, where walls had ears and spies were commonplace, Franco believed dancers were passing on coded messages with their feet!

In fact, the banning served only to strengthen the national unity and fierce pride of the Catalans, which could not be extinguished, even under the rule of a dictator. The Sardane brought together all ages and classes, linked them to each other as they raised their heads and hands and declared their  ‘Catalanité’

Join in the next time you see a Sardane starting up- the more the merrier!