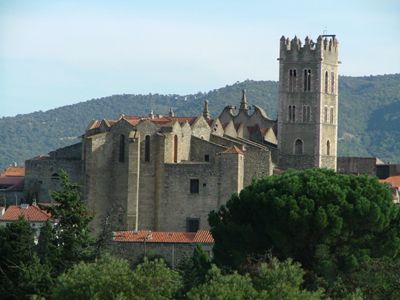 Now the huge cathedral-like church of St Etienne seems way out of proportion to the narrow streets that surround it.

Inside the grand pink marble doorway the vast nave is dark. In the gloom the gold on the altars and side altars gleams. There is a Cross des Outrages, a huge organ, many paintings.

Outside the atmosphere is lighter. There are several small but pretty squares. There is an impressive tower made from the same river stones as the equally impressive ramparts.

In the Hospici d’Ille, now the Centre of Sacred Art, passing pilgrims used to be cared for and resuscitated. In their small sleeping alcoves, statues, crosses and altars are displayed.

All the information you need on the abundant Baroque Religious art in the Têt Valley is available here. But, for many, the most interesting objects in view are the frescoes of the little chapel of Casenoves. 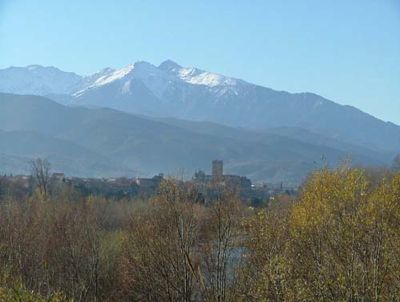 The fresco fiasco began in the ruined village of Casenoves. Across the bridge on the road to Belesta, a small road on the left runs along by the river.

It is a popular picnic spot. Continue along the road till a sign informs you you have almost reached the XI century chapel of St Sauveur containing some of the oldest frescoes in Europe. (Falls of rock mean you have to walk the last few metres).

The chapel is surrounded by ancient olive groves, the remains of the village of Casenoves and a tall square tower. The church is usually locked.

Too late! The frescoes that used to decorate its walls have gone!

In 1953 an unscrupulous art dealer read of the frescoes and, with the blessing of the then Mayor of Ille, bought them for a pittance.

He sold them on.

This did not go unnoticed. The Mayor and several Councillors left under a cloud. Recognising their loss, efforts were made to recover them, but the dealer was dead, all efforts were fruitless. Eventually most of them were found in Switzerland, and, since 1997 have been on show in the Hospici. 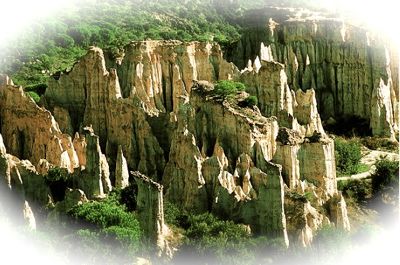 Near Ille sur Têt, it is impossible to ignore the strange limestone cliffs dominating the landscape. Follow the road to Belesta and turn right by the builders merchants. You will arrive at Les Orgues d’Ille. The amazing “Cheminées des Fées” have been sculpted by nature over the last five million years.

Similar in appearance to those found in Cappadocia in Turkey, they form a natural amphitheatre that is a paradise for photographers, a haven for birds and provides a fascinating walk for the many visitors who follow the well laid out trail. You will be given a helpful leaflet as you enter but, really, the incredible scenery speaks for itself.

Back in Ille itself a visit to the Musée du Pompier is fun. The old fire engines, uniforms and equipment as well as the collection of over 2000 miniature vehicles plus a video takes at least an hour. 04 68 84 03 54

In nearby St Michel de Llotes the Musée de l’Agriculture Catalane is worth a visit – when it’s open, which doesn’t seem to be too often! All the tools and machinery used when the difficult mountain terrain was cultivated are there. Easy to imagine the village, long before WW1 decimated the male population, when the hills were alive with the sound of threshing and charcoal burning, of vineyards worked by mule and cork forests harvested. The 400 or more items are well set out and the tale they tell is fascinating. 04 68 8476 40.