The road from Le Boulou takes us through Amélie-les-Bains and Arles-sur-Tech, separate days out in their own right, before passing through the tiny village of Le Tech, with its recently renovated million euro ‘mairie’, and on to the end of the Tech Valley.

On either side of the winding road, signposts suggest Corsavy, Montferrer, Saint Laurent de Cerdans and Coustouges, pretty villages well worth a visit another time. Today however, we are heading towards the end of the line, the unspoilt fortified medieval town of Prats de Mollo, dominated by Fort Lagarde, designed by Vauban in 1680.

With Canigou at its back and the River Tech in front, the views all around are stunning. But it was not merely built for the view.

After the 1659 Treaty of the Pyrenees, Louis XIV enforced the outrageous salt tax, la gabelle, intended to finance the maintenance and construction of fortresses and security around France. The tax was unfair, privileging the wealthy and penalizing the poor, and the funds were much misused by the king.

The peasants revolted.  Salt was imperative to feed livestock and preserve meat and the new tax sent the price sky high. They refused to pay it.

A period of smuggling and resistance against the crown followed. One of Louis’s tax collectors was captured and murdered.

Along with armed volunteers, Joseph Trinxeria, leader of the rebel group “Angelets de la Terra” resisted attempts to impose the unpopular tax  for more than 10 years.

To punish the villagers, Louis had parts of the medieval walls destroyed.

Built to keep the Spanish at bay, the garrison of Fort Lagarde became peace keepers in Prats de Mollo itself, much resented by the villagers.

The king’s engineer, Vauban, rebuilt the town walls, extended the fort and  a tunnel was built from the village to the fort, today a long, cool climb up to the castle.

Wander around the fort, take a guided tour, or check out the local tourist office for details of times and dates of summer afternoons when the rebellion is re-enacted in a typically French “Spectacle” featuring much costume, cavalry, fencing and jousting. 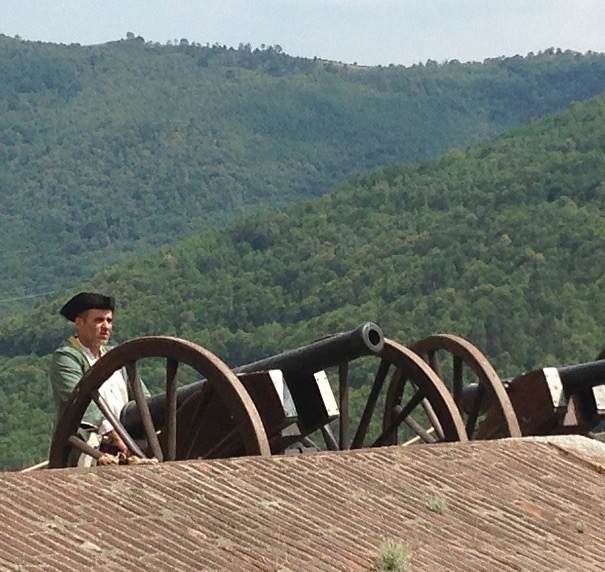 Enter any of them and follow the narrow cobbled streets of the old town to the beautiful 13th century church.

You will pass a curious cross “Croix des Outrages,” adorned with all the tools of the Crucifixion. Typical of this region, this one is a fine example, as is the door of the church itself. The curls and swirls of the local iron never rust, the lock is a serpent and, next to it, planted in the wall is a 2 metre whale bone.

The little chapel of Saintes Juste and Ruffine is also worth a visit.

Walking, canyoning and exploring is superb.  A fairly strenuous walk will take you to the imposing XIII century Tour du Mir, ancient signal tour, with wonderful views all down the tech Valley to the sea. For more views, drive up to the Col d’Ares overlooking the Tours de Cabrens, Notre Dame de Corral and over into Spain or head off to the Pic de Costabonne. Maps and/or a guide available from the tourist Office.

La Preste, at the very end of the valley has been a source of Thermal Cures since the 14th century. Originally of leprosy but now for urinary infections as well as general health, massage, mud and thermal treatments. The natural beauty of the surroundings, the tumbling waters, the peaceful streams all combine with the grand old hotel buildings to create an atmosphere of calm and healing. 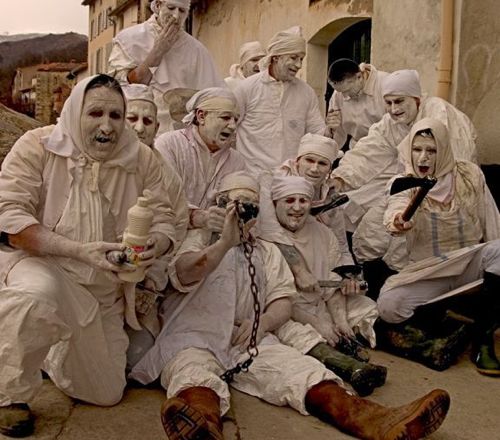 The town comes out of hibernation every year for the ‘Fête de l’Ours‘ celebrating the legend of the bear who kidnapped a local damsel.  Luckily, she was rescued by shepherds, the bear dragged into town, shaved in the main square and transformed into a man.

Every February, ‘bears’ and ‘hunters’ gather in the fort courtyard, swig down copious quantities of liquid courage, black up with a mix of oil and soot, and dress in sheepskins.

After a hilarious chase through the narrow streets of Prats de Mollo, ‘barbers’, with faces covered in white flour paste, attempt to catch the ‘bears’ and in a storm of flour and soot, they are shaved, become men, and the party begins. 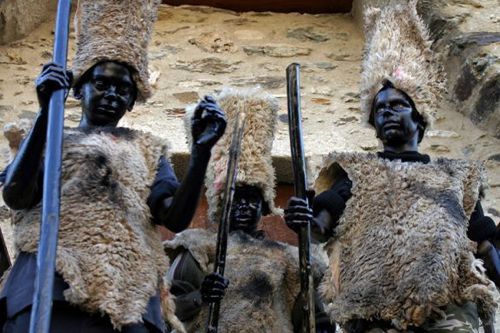 DO YOU LIVE NEAR A PRAT?