Glimpses of the Tres Vents and the Haut Vallespir as I approach the village still make my heart sing.

The ’real’ village isn’t what you see when you drive through the rather uninviting one-way system on your way, perhaps, to Prats-de-Mollo.

Instead, venture into the heart of the village to the medieval centre, the Abbey, the Moulin and maybe on to Les Glycines for a tasty lunch.

So, at the first roundabout as you approach the village from Amelie, take the 2nd exit and park at the Salle des Fêtes about 200 metres along on the left.

With the Salle behind you, go left and take the 2nd turning, Rue des Glycines, and at the top of the slight incline to your right is the hotel/bar/restaurant of the same name just right for a reviving coffee on their wisteria-covered terrace and perhaps consider returning here for lunch a bit later on. 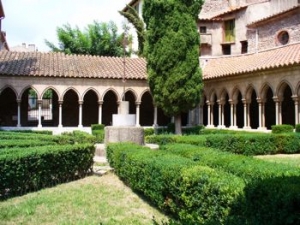 Turn left out of Les Glycines and follow the road past the Spar and up the hill; facing you are the lovely Mairie gardens and the beautiful building which now houses the Mairie – pop in and see the reception hall and the Salle de Mariage.

Diagonally opposite the Mairie is the Tourist Information Office. (At the time of writing this has decamped temporarily into the Abbey Cloisters a few steps away and is clearly signposted.)

You can now pick up a collection of leaflets on the village and the immediate surrounding area but today I suggest you collect a village street map and the ’Visite de la Ville’ leaflet which will take you on a walking tour of the historic centre.

Before setting off though, consider a guided tour around the Xth Century Abbey, Sainte Marie d’Arles, (open from 9 til 7 in July and August) and see the mysterious Sainte Tombe.

The recently refurbished Place du Couvent just beyond the cloisters will then start you off on the short walking tour of the ’centre historique’. 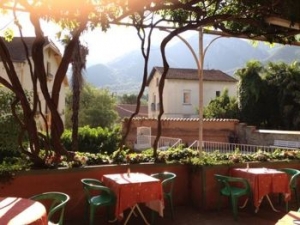 New proprietors Thierry and Patricia Genot are gradually refurbishing the hotel and have made a great start with their attractive bar and restaurant, but it is the shady outside terrace which is particularly appealing on a hot summer’s day.

An appetising menu is on offer consisting of four choices for each course, two courses for €13.50 and three for €15. (Prices right in 2015)

If lunch is not on the agenda today they have a delicious selection of gourmand ice-cream concoctions, very hard to resist! 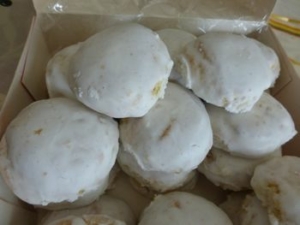 Turn right and go to the top of the street, turn right again, and next to the tabac is the Patisserie Touron, makers of allegedly the most famous ’rousquilles’ in the area – stock up while you can.

Now take the lane immediately to your left, turn right at the bottom, then straight on for just over 200 metres, bear left, and facing you 50 metres further on is the entrance to Le Moulin (open 10 til 7 every day throughout summer).

Here are the workshops of several artisans including potters, leather workers, iron workers, the old Catalan textile looms and a large exhibition hall displaying (for sale) the beautiful work of over a dozen very skilled artists, craftsmen and women.

If you look on the Tourist Information website before you come, you could coincide your visit with one of the falconry displays which take place in the gardens behind the Moulin throughout the summer and which are very popular. 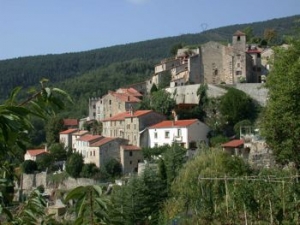 On leaving the Moulin, turn right and a short walk will bring you back to your car park.

If you have a little more time, drive out of the village towards Prats de Mollo for a kilometre and turn left at the new bridge, past the rugby ground to the refurbished Fontaine des Buis ’guinguette’ with a picnic area alongside the fast flowing Tech.

There are a couple of little beach areas very good for a cooling paddle. Or just along the main road again and turning right, a few kilometres winding steadily upwards takes you to Corsavy for some stunning views of the Haut Vallespir in one direction and the Canigou range in the other, tantalisingly close.

A sharp right hand turn on entering the village brings you to the Crêperie de Cortal de l’Aloy for yet more refreshments or an apéro while you soak in those views. Bonne soirée!!