It is 1793.The Spanish Royalist Army holds the Tech valley, Collioure, and Port-Vendres on the coast. It isn’t looking good for the French Republican Army, under the command of the ‘Comité de salut public’, temporary revolutionary government. Responsible for the ‘Reign of Terror’, (mass executions of ‘enemies of the revolution’), they execute French generals for losing battles, and French soldiers for displaying royalist tendencies!

The Fort of Bellegarde on the important Perthus pass has already been surrendered to the Spanish, who are advancing on Perpignan. The tide turns and a French win at the Battle of Peyrestortes forces the Spanish back to the Tech River.

In 1794, on the plateau of Pla del Rey, the Battle of le Boulou takes place. Led by the seasoned Général Dugommier, it is a decisive victory over the Spanish, who, with the way back to Bellegarde blocked at Les Cluses, are forced to flee in disarray via Maureillas las Illas and the Col du Porteil.  Spanish dead and wounded are estimated at over 2,000 whilst French losses are reported as 20 killed and 300 wounded.

The Battle of the Pyrenees stemmed mainly from the attempt by the monarchies of western Europe  to control revolutionary France, lest the fever of revolution spread across its borders.

The king of Spain promised neutrality, if Louis XVI was spared.  Red rag to a bull! Louis was executed in January 1793 and war was declared between France and Spain, putting the Roussillon on the front line.

Pierre Bayle, 10 years old, soldier of the brand new French Republic, was the first child to officially die at the battle of Le Boulou in 1794.

His weapon was his drum.

He is remembered for his courage in drumming continuously throughout the night to mask the sounds of cannon movement and military preparation before the battle. Believing that the attack was coming from that direction, the Spanish turned their cannons on the drummers.

He was hit in the face and died on the spot.
Le Petit Tambour was immortalised by sculptor Gérard Vié. His statue stands proud in Le Boulou centre, homage to the brave little drummer boy.

Today, a fascinating panoramic viewpoint map looks out over the battle ground. It situates the French and Spanish troops below, giving numbers and positions.

Close your eyes and you will hear the thunder of the cannons, the beat of the drums, the cries of the wounded and dying, smell the gunpowder. A bloody battle, landmark in the history of the Roussillon, engraved on the Arc de Triomphe in Paris.

Drive out of Le Boulou on the main road towards Perpignan. Look out for a small, rather awkward  left turn after the pottery and level crossing, signed to Domaine Els Barbats which you will soon pass on the right.

This small, totally organic vineyard and orchard produces some delicious organic wines and muscats, along with almonds, grape juice and local products.

Paul and Muriel Poutingon pride themselves on being completely self sufficient, including a roof full of solar panels to provide all their power needs — the Good Life à la francaise! You will receive a warm welcome in this tiny tasting room. They do not believe in selling out to the large supermarkets, so the wines are only to be found there, or in small wine boutiques.
Contact them on 04 68 83 28 51, or just pop in. If the gates are open, so are they!

After a fortifying taster of organic wine, and a nibble of  organic almond, continue along this pretty, winding road for a couple a miles, until a left turn indicates the site of the battle. Follow the signs, and the distant French flag, to arrive at this historic and relatively unsung panoramic site.

A historic circular walk with signs and explanations of the bloody battle, several of which are being renovated after weather damage, starts off from this point, or from Le Boulou itself. Ask for details at the tourist office or look out for the full and detailed walk in the spring edition of P-O Life.

As well as its strategic importance, lowest natural crossing point over  the Pyrenees at Le Perthus, crossroads into Spain or up to the Tech Valley, Le Boulou has long held the dubious title of the biggest bottleneck in the P-O.

Today, thanks to a  relatively new by-pass,  the mists of car exhaust and impatient, honking drivers are a dim and distant memory, and Le Boulou town is on the up.

Wander around the great little shopping centre with its new pedestrian zone, la Ramblas,  a variety of small boutiques, and plenty of pavement cafés to allow some serious people watching, with pretty cobbled streets and ancient monuments tucked away off the main through route.

Visit the Église Sainte-Marie just after what used to be the tourist office before becoming part of the local constabulary premises. Cool shelter on a hot day.  The only remaining part of the original 11th century church is the fascinating door surrounded by its frieze, depicting scenes from the childhood of Christ, sculpted by anonymous 12th century sculptor, the Master of Cabestany.

Now you are in the ‘cellera’ — heart of the original small walled settlement. Farmers would build  cellars or fortified areas around the church, surrounded by pits, to store and protect their crops from abusive local lords seeking inflated and unjust taxes.

Head past the church, and look up at the cat and flowerpots sitting on a nearby window ledge. Is the cat real? Are the shutters real? This fabulous ‘trompe l’oeil’ will certainly make you look twice. Is there even a window there?

A little further on, watched over by the statue of the Little Drummer Boy, a small and shady public garden with pretty fountain makes a pleasant stop before entering the tiny 15th century Chapelle de Saint-Antoine.

Named after the patron saint of Le Boulou, originally built on the site of the former cemetery and intended as a crypt for sheet salesman, Guillaume Nègre, it has since served as a school room, flour storage, and army bread oven before being restored as a chapel. 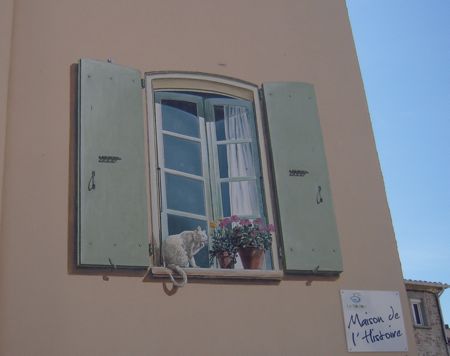 Stop a minute to admire the magnificent 15th century, 832kg bell,  before entering the ‘Espace des Arts’  art gallery for local artists and sculptors, with a permanent expo of the Battle of Le Boulou.

One of the largest local exhibition galleries in the region, a museum is to be added in the future, to better present the rich history of this small town.
Open Tues to Sat 9h – 12h and 14h – 18h. Free admission
SITE

Le Boulou, or El Voló, takes its name from the Catalan for cliff, situated as it is between rivers Tech and Valmanya with sheer ravines overlooking the town.

In the early 18th century, 150 years before the present suspension bridge was built to allow passage into Spain, the Tech River regularly flooded the valley. The wooden bridges rarely won the watery war with the angry river and at times of high rainfall, it was impossible to cross.

A group of young men built up a nice little business by forming a human chain and transporting travellers across the river on their naked backs. 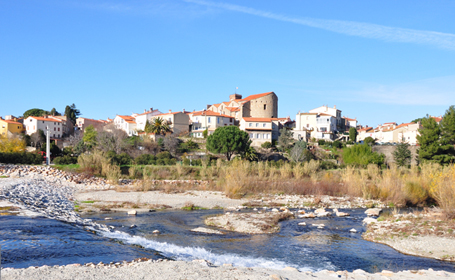 Known as ‘Les Barques de Cul’ (arse boats) due to their bottoms sticking out of the water to form a bridge, they provided a sight for sore eyes for the ladies of Le Boulou on a rainy day!

And talking of water, why not pay a visit to the brand new Maison de l’Eau et de la Méditerranée (MEM), an exciting new concept inviting visitors of all ages to consider the vital role that water plays in our way of life. FIND OUT MORE….

Or the free Maison de l’Histoire, small museum in the car park opposite the mairie.

For a delightful stroll, follow the path along the banks of the River Tech, or just sit on one of the wooden benches and enjoy the sound of the water bubbling over the rocks.

On the outskirts of Le Boulou, on the road to Le Perthus, the ‘Thermes’  water therapy centre is an oasis of calm, shady walks, and fizzy water!

The medicinal and healing qualities of the waters are recognised far and wide, and did you know that if your doctor recommends a spa treatment which would be beneficial for your health, the cost is reimbursed by the state?

Mini cures for weight loss, back problems, help with stopping smoking, are available as well as mornings of pampering for male and female from only 55 euros, including mud bath, water massage… hmmmmmmm, nice, although these are most definitely not reimbursed! (Tel: 04 68 87 52 00 or email leboulou@chainethermale.fr)

And once you’ve lost a few pounds sweating it out in the Thermes, why not change currency, pop next door and lose a few euros on the slot machines in the casino?

A little naughty but all good fun as long as you don’t go mad, and the casino restaurant ‘Le Cédrat’,  puts on a very reasonably priced three course evening menu  and a lunchtime ‘all-you-can-eat’ buffet. Of course, you don’t have to risk your hard earned pennies on the roll of a dice – the restaurant is open to all. Don’t forget your passport or ID card or they won’t let you in!

Le Boulou is working hard to shake off its past image of gridlocked traffic,  a ‘pass through’ on the way to somewhere else, and a walk around the panoramic battle site, followed by a wander around this much improved little town is recommended.