WALK THE REGION WITH CHRIS AND TIM PARKER

A 2 hour straightforward walk over the hills from Le Perthus, with lots of historical interest. Well signed route with yellow way marks including sections of the GR 10 (red and white way marks). Some footpaths and a lot of forest road. One for a day when you fancy a nice walk but not a big climb!

Find wooden post for GR10 beside woodland at rear of car park. Take the path up through the woods to meet tarmac road leading to the Fort.

Turn right to reach junction with DFCI VE19 on right. Take the DFCI and descend. Within 10 mins from junction pass 2 military fountains from the 17th century – Fontaine de Colomer on left and below it, behind electricity station, Fontaine de Pedres Blanques on right.

Continue descent to meadow area. (30 mins from start)
Ignore track to left (GR 10) and continue straight on. Track rises gently to emerge after 15 mins on a concreted cycle route.

Look back for great views of Fort Bellegarde, the Albères and mountains beyond. 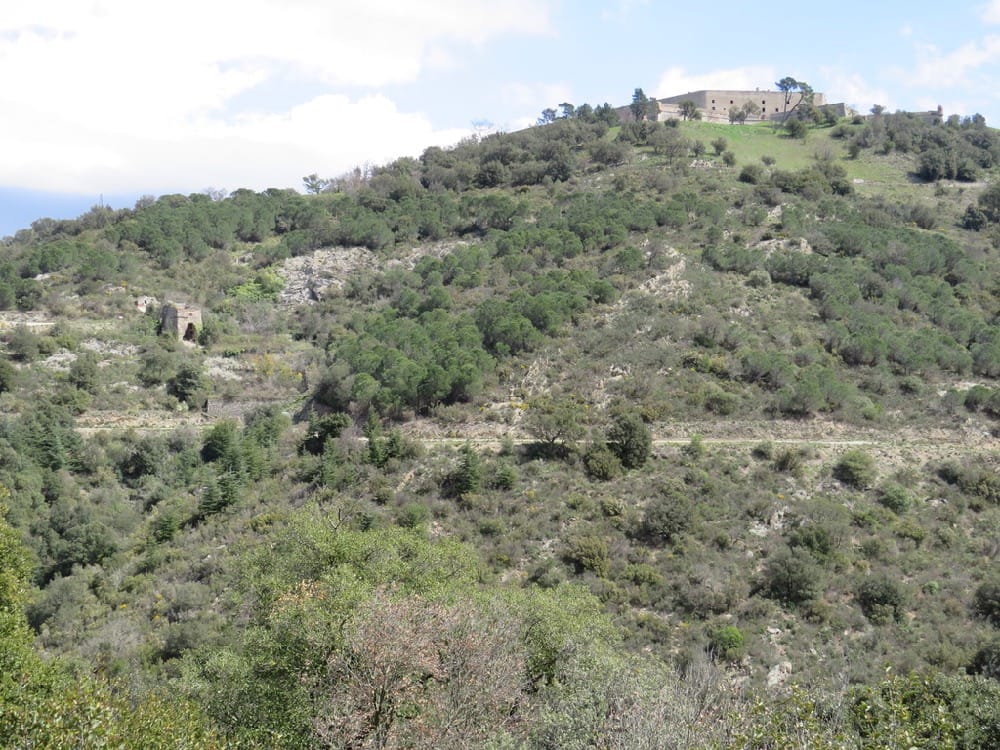 Vauban was responsible for the massive fort with its sixty-two metre high, six metre thick walls, built on a previous Spanish stronghold and France still maintains sovereignty over it. From its terrace, the views over Canigou, the TGV line linking Paris to Madrid, the Pyramid of Ricardo Bofill symbolising the junction of the two Catalonias, the archaeological site of the Panissars joining the Via Domita to the Via Augusta are breathtaking.

The area has a long history. Here the Via Domitia military route build by the Emperor Domitius in 118 BC, met the Via Augusta as it continued into Spain, the two routes connecting Rome with Cadiz.

In 71 BC, Pompey had a monument constructed at the Col de Panissars, just below the fort of Bellegarde, to commemorate his victories over the Spanish who had, unwisely, revolted against Roman rule. The 31 x 15 metre foundations were discovered in 1983 beneath the remains of the Benedictine Abbey of Ste Marie des Panissars. One can see the shape of many rooms and the ruins of the Abbey, destroyed by Vauban for “strategic” reasons.

Having explored the ruins, stay on the crest of the hill and follow footpath to the look out tower (redoute) with its typical Vauban design.

Continue down to visit the 17th century military cemetery

Take narrow footpath behind the cemetery leading directly upwards through cork oaks to the smaller moated fort below Fort Bellegarde. Turn left alongside moat. Entrance to this small fort is forbidden but main gate can be seen on left of the building. (Editor’s Note: I believe you can actually walk around the ruins of the small fort. I have! 🙂

Continue left below Fort Bellegarde to emerge on the access road.

According to the terms of the Treaty of Versailles in 1659 Roussillon was returned to France in 1659, and Vauban undertook extensive development of the site. Six hundred men could be fed here in times of peace and double that number in wartime. Apart from barracks, kitchens and the Governor’s quarters there is a sixty-three metres deep well, the deepest in Europe, a chapel and hospital. During the French Revolution, the fort was taken by Spain but reclaimed by French General Dugommier. Later, when the Retirada saw nearly half a million Spanish civilians and soldiers flee over the border into France, the Fort was used as a hospital. Occupied by German troops during World War 2, it was finally bought by the Mairie of Le Perthus in 1974.

Descend the road a short distance to pick up GR10 footpath on left to return to car park 2.

Pop into Le Perthus for a large choice of places to eat, drink or shop to your heart’s content – and out of season is the best time as the crowds can be rather overwhelming!