“Spain to the left of me, France is to the right, here I am… stuck in the middle with you”
Stealers wheel 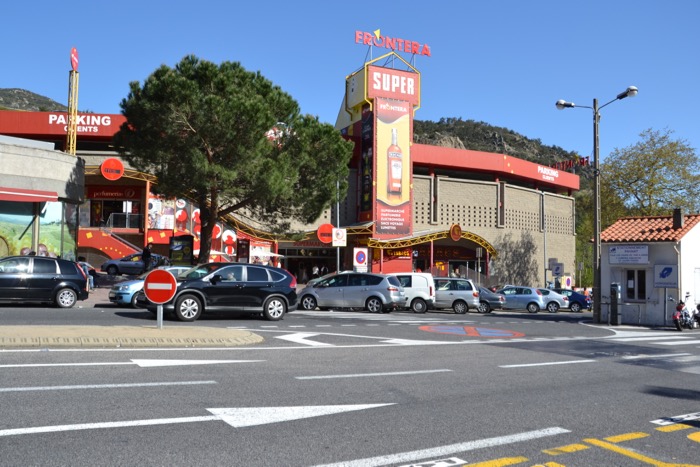 Between France and Spain on the N9 is a strange no man’s land dedicated to consumerism.

Stroll down the ‘route principale’ from the French side, and you are still in France…… until you arrive at the stone ‘borne’ or marker on the left hand side, just past the town hall. At this point, it all depends what side of the road you’re on! In fact, based upon a rather bizarre border agreement which dates back to the signing of the treaty of the Pyrénées, (1659) Le Perthus becomes Spanish on the left hand side and French on the right. Difficult to know where to stop saying ‘Bonjour’ and start saying ‘Holà’! 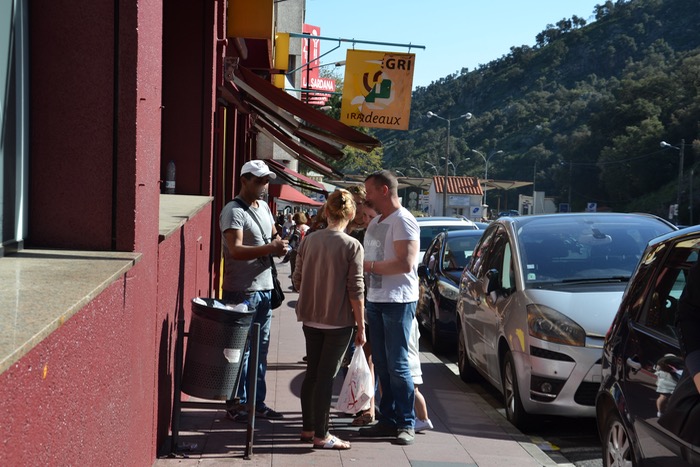 Most of the large shops on the left (Els Limits) are resolutely Spanish and belong to the municipality of La Jonquera. Booze and tobacco ring up at Spanish prices,  which explains the permanent presence of sweaty, jostling bodies on the left hand side, heaving forbidden shopping trolleys of pastis and Saint Miguel along narrow, packed pavements, towards cars mainly parked in large car parks to be found at either end of the town.

Dodgy dealers offer camcorders, watches, sunglasses, eyes glancing shiftily up and down the street. The presence of these ‘bonimenteurs’ or ‘vendeurs à la sauvette’ – street sellers surreptitiously touting their wares, only adds spice to the slightly seedy fairground feel for some. For others, Le Perthus is somewhere to visit quickly, make your purchases, and skedaddle!

Of course, there is a lot more to Le Perthus than cheap booze, paella pans and sombreros! 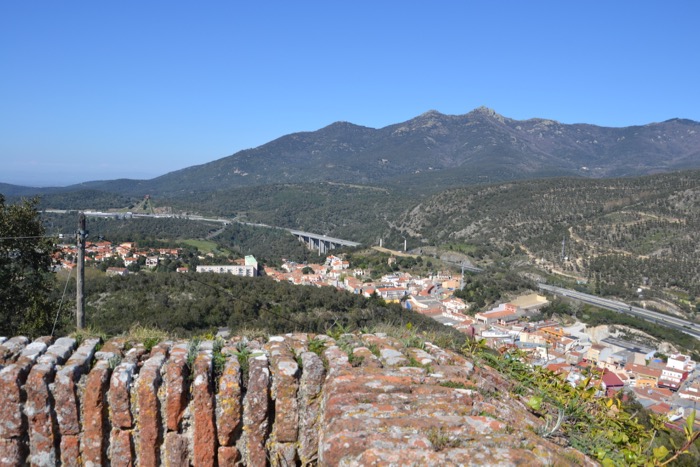 Turn off right as you enter Le Perthus from France and follow the signs to Fort de Bellegarde, breathing out as the noise of cash registers dims and the lorries on the motorway take on dinky toy proportions. Vauban was responsible for the massive fort with its sixty-two metre high, six metre thick walls, built on a previous Spanish stronghold and France still maintains sovereignty over it.

From its terrace, the views over Canigou, the new TGV line linking Paris to Madrid, the Pyramid of Ricardo Bofill symbolising the junction of the two Catalonias, the archaeological site of the Panissars joining the Via Domita to the Via Augusta are breathtaking.

It also boasts a well sixty-three metres deep, the deepest in Europe. The spectacular views from its high walls and fabulous walks in the area of the fort make Bellegarde well worth a visit. Visit the fort from June 15th to September 20th 10h30 to 18h30 or off season by appointment (Tel: 04.68.54.27.53).

Vauban himself is quoted as saying “Nothing overlooks this place”

In the past, Le Perthus was an important passage through the Pyrénées in Roman times.

Initially a military route build by the Emperor Domitius in 118 BC, the Via Domitia divided in two just South of Perpignan after Ruscino. 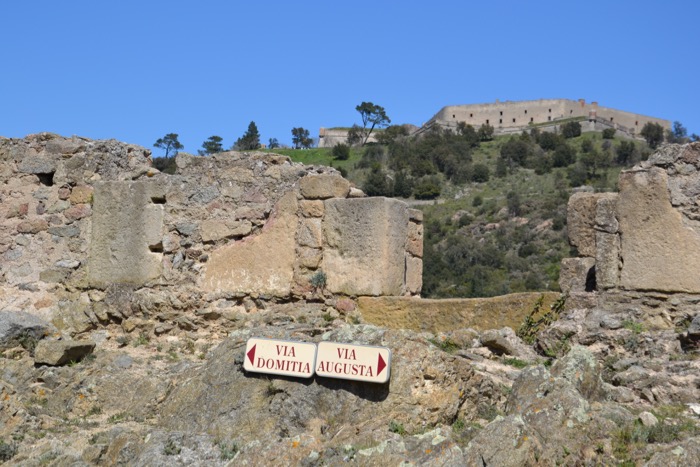 One part headed through Elne and along the coast to Port Vendres (Portus Veneris) crossing the border over the Col de Banyuls.

The other part ran more or less parallel with the A9 motorway, along the Gorges de la Rom, and, via Les Cluses, crossing the Alberes at Le Perthus.

The route connected Rome with Cadiz, and was part of the 100,000 kilometres of roads built by the Romans throughout their mighty empire over eight centuries.

In 71 BC, Pompey had a monument constructed at the Col de Panissars, just below the fort of Bellegarde, to commemorate his victories over the Spanish who had, unwisely, revolted against Roman rule.

The 31 x 15 metre foundations were discovered in 1983 beneath the remains of the Benedictine Abbey of Ste Marie des Panissars. 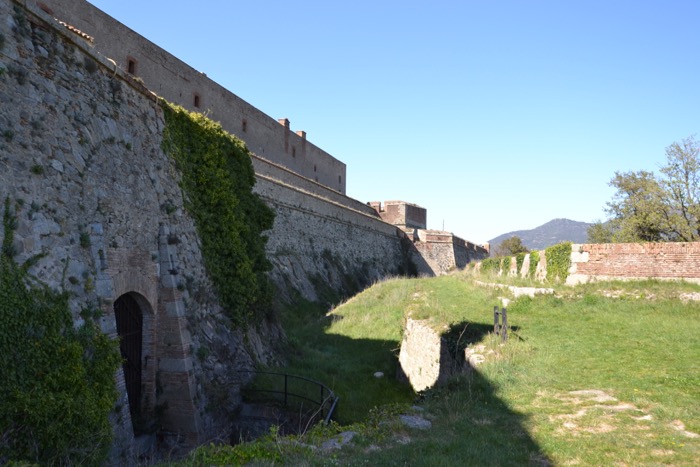 Nearby, the tracks of the Roman wagon wheels are still visible. and it is easy to close your eyes and imagine Hannibal crossing the Alberes here in 281 BC and Pompey, in the opposite direction, a century and a half later.

In the 14th century, Le Perthus was known as Pertusium de Parrochia Santa Maria de Clusa.  Imagine filling that in on a form every time you’re faced with French bureaucracy!

AN HOUR IN LE PERTHUS

A shabby excitement, a feel of the fair
And wheeling and dealing afloat in the air
An hour in Perthus leaves me quite suicidal
Au revoir, adios it’s time to skedaddle!