A cock and bull story 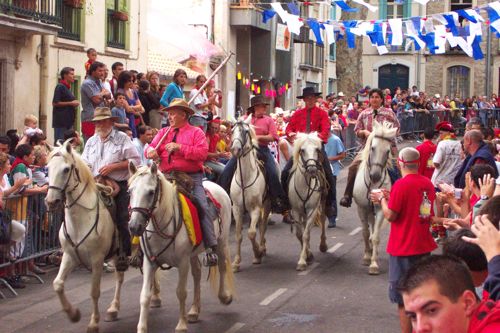 Yes, it’s that time again. As the Feria draws to a close it’s time again to reflect on the traditional running in the streets of Ceret.

There was a two-legged creature that roared around charged up on cheap wine and testosterone, and oh yes, some young bulls scampered about too. Now I have to confess that for most of my time in this region I’ve gone along with the whole thing, enthusiastically even.

This is not the Corrida after all, with its carefully choreographed, ritualised slaughter. No, this is just a bit of harmless fun, tradition, spectacle, excitement, drama. Isn’t it?

Well, I recently reminded myself what it was all about by reviewing a video clip I took a couple of years back. About a half a dozen beefy lads had wrestled a young bull to the ground and kept it pinned down for a good minute or so whilst triumphantly grinning at each other through an alcoholic haze.

It wasn’t a pretty sight. And not much of a contest either. The out-numbered and over-powered beast couldn’t move an inch. All of this in the name of entertainment. 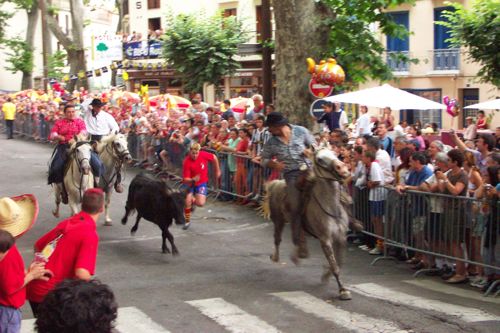 When I freeze-framed the video I could see a look of what I can only describe as blind terror in the animal’s eyes. It was high on adrenaline, in fight-or-flight mode though prevented from doing either.

It couldn’t possibly know that within a few more seconds it was going to be released, as indeed it was, unharmed – if that’s the right word to use in such circumstances. For all the poor creature knew its end was nigh.

Or was I completely misinterpreting events? Superimposing my human preconceptions about dread and fear on to this bonny bovine who might have actually been enjoying the whole experience for all I knew.

And let’s not forget the lads. Any one of them could have been seriously injured. Deep gashes to the forehead welling with blood are regular sights, proudly paraded as evidence of a passage of rite.

So does this risk-taking by these modern day gladiators balance the account? Is it okay because they’ve knowingly put their necks on the line? 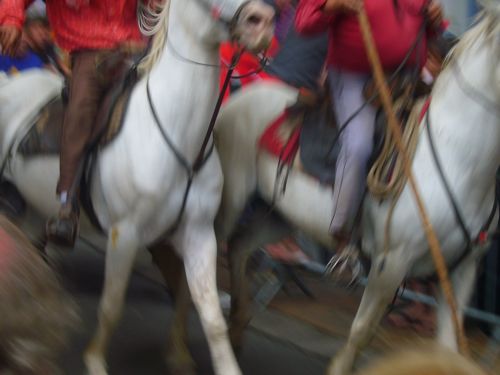 I know what I think but I don’t want to be a party-pooper.

It is a huge tourist attraction and there’s no doubting that the atmosphere is pretty amazing. So while I think it’s time for change, what I’m proposing for next year would actually be a big improvement. Something that would be much more enjoyable and yes, more sporting too, with the same if not a greater potential for thrills, spills and, oh yes, blood-letting too.

Here’s what I have in mind.

Most spectators agree that the magnificent Camargue horses and their supremely skilled riders are the real stars of Ceret’s July spectacular.

So, let’s have pairs of well-up-for-it lads (there’ll be alcohol checks of course, to ensure they’ve drunk enough) occupying the front and rear of jauntily-spotted pantomime-bull outfits being chased around the streets by the Camargue horses, encouraged by judicious prods from the riders’ long wooden poles duly sharpened for the occasion.

It would be much more evenly balanced than the current format – and so much more fun!