There are Crocodiles in Collioure….but to discover them you must first find L’Ermitage de N.D. de Consolation. This is easy. Exit 14 off the express way from Perpignan to Port Vendres, follow signs to Le Rimbau and the Consolation. Or walk from Collioure taking the Route de Consolation.

It is a beautiful spot. Huge plane trees shade the old stone buildings, limes, chestnuts, and poplars surroundthe walls and create a haven of cooling green.

You are made welcome at the Bar, you can stay in the Hotel, eat in the dining room or bring your own picnic/barbecue. It is the starting point of many footpaths and walks. 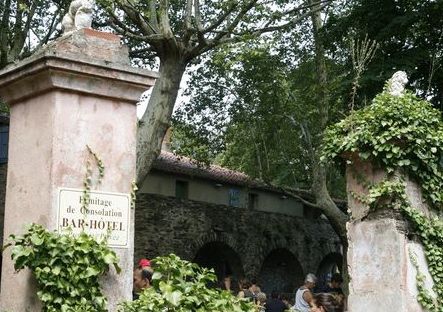 The surrounding hills are arid in the extreme but, around Consolation, abundant waters flow.This strange phenomenon did not go unnoticed in ancient times. Long before Christianity came to Iberian Gaul, Cybele and other prehistoric deities were, most probably, being worshipped here. Nymphs would have cavorted beneath the tall trees.

Under the centuries-old plane trees, legends abound. One says the site with its bubbling water was originally a place of ancient worship to the god Neptune. The water flows from a spring about 100 meters above the chapel. A path through the woods leads to the “Fontaine bleue”, a fine example of 18th century balance and symmetry. This monument is now unfortunately in ruins, although a small dolphin sculpted above the central tap can still be seen. Neptune could well have been God of this valley, calming the waves and protecting the sailors setting forth from Collioure until Our Lady the Virgin Mary took over the task. 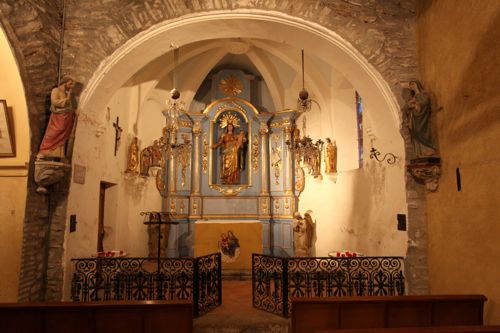 It is in the little Chapel dedicated to Her that you will find the croco- diles. One is suspended from the first arch, a    very small one lurks beneath a table in the side chapel on the left. A larger, fiercer one guards the many marble plaques thanking Our Lady for saving sailors and fishermen from numerous storms and tempests. It has been claimed that the original beast was captured in the port of Collioure but, in fact, it was brought back from the Senegal at the end of the 19th century and, having been preserved during the voyage, was offered to the Chapel by the grateful navigator.

There are oil paintings of further storms, all ex votos. A particularly dramatic one donated by Captain Peroneille in gratitude for the saving of his three-master on 30th November 1888 shows his ship, struggling to survive in tempestuous seas, lashed by relentless wind and rain. Our Lady is depicted in the stormy clouds, radiating her protection and defending the entire crew from drowning and disaster.

There are tales of hermits, of healing, of saints, of treasure, of pilgrimages and festivals. Some of the festivals ended in “regrettable incidents”. Quarrels between the folk of Port Vendres and the folk of Collioure ended in blows in 1806 and, the next year, eight soldiers were placed on guard to prevent “Troubles at Consolation”.

Nowadays the games of Boules are good-natured, the feasting that takes place beneath the plane trees needs no armed supervision. An association of 84 Collioure families bought the Ermitage from the State after the Revolution and their descendants still manage it. This now involves so many Collioure residents that the village rightly considers it to be their private property. The grill/picnic place is closed at 8pm each evening to allow the natural peace and meditation of the Ermitage de Consolation to resume in tranquility.