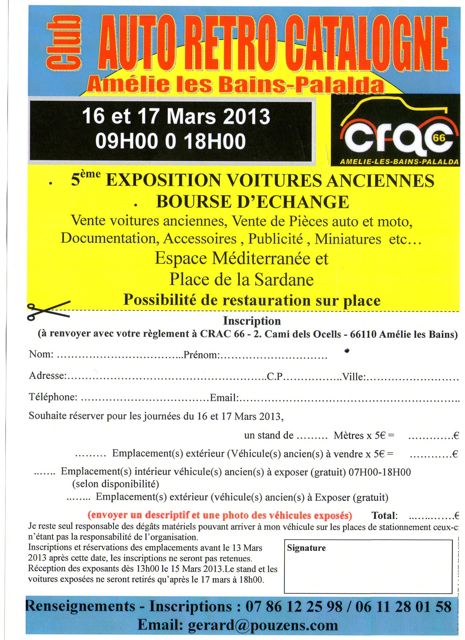 CRAC66 are holding their annual “Bourse” on the 8th/9th March in Amélie les Bains.

It will run from 9.00 to 18.00 both days in the “Espace Méditerranée”  at the Place de la Sardane. Click on attached poster for more details.

The event includes numerous stands offering auto parts and memorabilia, 40+ “voitures anciennes” on display, food and drink and a jolly good day out for all.

Entry to the Bourse is one euro but that will get you a drink as well.

The website will show you where the club has been and where it plans to go in 2014 plus it has lots of links to car related topics and local information (in French and English). Check it out…. WWW.CRAC66.COM

CRAC66 (Club Retro Automobile Catalogne 66) has been running for c.10 years.
The President is Gerard Pouzens  lives and works in Amelie les Bains and runs  the local ambulance, taxi and funeral service.

We have around 40 members of which 6 are Brits. The aim of the club is to develop a welcoming environment for anyone interested in old cars, and in owning and running “voitures anciennes” (this means anything over 25 years but there are generous exceptions such as for my 1995 BMW).

We arrange a monthly “sortie” into the local countryside (in France and Spain). The outings take in around 170km there and back inclusive of a meal or picnic. Examples of these sorties can be found on the web site  under “sorties en evenements automobiles”. We have a number of photo albums on view including  a trip to the Auto retro in Barcelona just before Christmas 2011.

Rosy and I got involved a few years back, after moving to France  in 2003. The contact was via some French friends, Odile and Joel Berard, who live in Maureillas and are on the CRAC 66 committee.

Joel helped me find my vehicle (BMW 320i cabriolet)  and is a very keen enthusiast, having bought and sold around 80 cars since he started collecting in Metz many moons ago.

We live in Le Boulou and organised the club’s outing just before Christmas. This was to Pals and Palafrugell in Spain, to visit the largest wine supermarket in Spain “GRAU”. From there we travelled to lake Banyolles and ate in a lovely restaurant called “el Carpa” which I would heartily recommend  for value, taste and welcoming atmosphere.

June 23 : BOMPAS : charity outing to take handicapped kids/adults out for a run

Aug 25  : Monthly outing – l’m organising this one and plan to visit Valmanya and Serrebonne but more details later (please don’t mention this as we like to keep the venues as a surprise until closer in)