The Kings of Mallorca: a Perpignan Palace and a Collioure Castle

An entire quarter of the old town in Perpignan is taken up by the Palais des Rois de Majorque. The entrance today is as circuitous as when it was designed in the 13th century to keep out attacking armies. 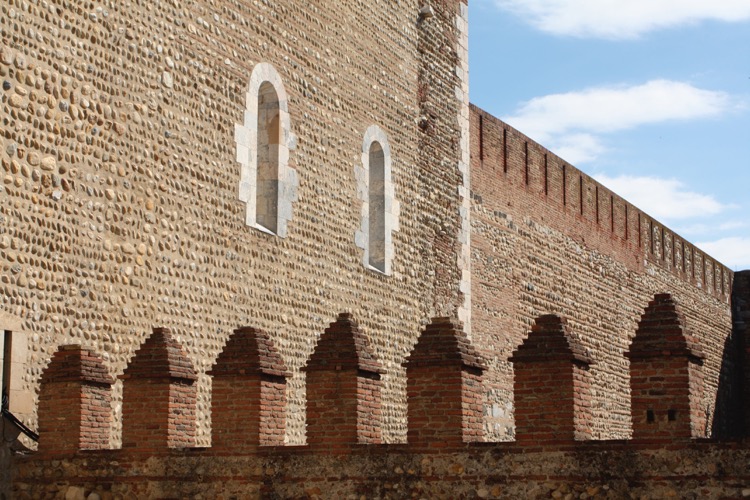 Flights of steps zig zag within sheer redbrick ramparts until, eventually, the elegant gardens and substantial castle are reached. A superb palace, in the heart of the city.

From the impressive Tour de l’Hommage the commanding view over mountain, plain, city and sea is a great introduction to the city.

The surrounding convents, churches and the cathedral bear witness to the religious fervour of the Kings of Mallorca, the green parks and gardens cool and peaceful between the warm red bricks of the ancient buildings.

The angles of the walls and windows of the Palace are cut from the pink, blue, red and white marbles of the Pyrenees Orientales.

A tour of the two chapels, the Royal apartments and grand halls that surround the central courtyard gives an insight into the palace life as it must have been lived in medieval times.

The Kings of Mallorca 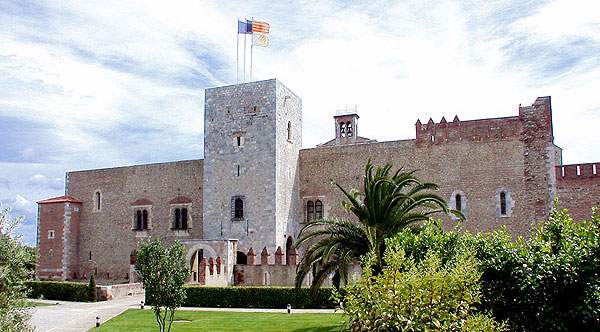 Jaume II, 1243 – 1311, of Mallorca, inherited his kingdom from Jaume I, James the Conqueror, King of Aragon, Count of Barcelona, Lord of Montpellier. (His brother got Aragon. This was to cause trouble in years to come.)

He was known, justifiably, as James the Builder. He built the Chateau Royal in his port of Collioure as well as fourteen new towns in Mallorca and two in Minorca. He began the Cathedral in Palma, renovated the Almundaina Palace and, on a neighbouring hill, built the palace of Beliver where he was to die. 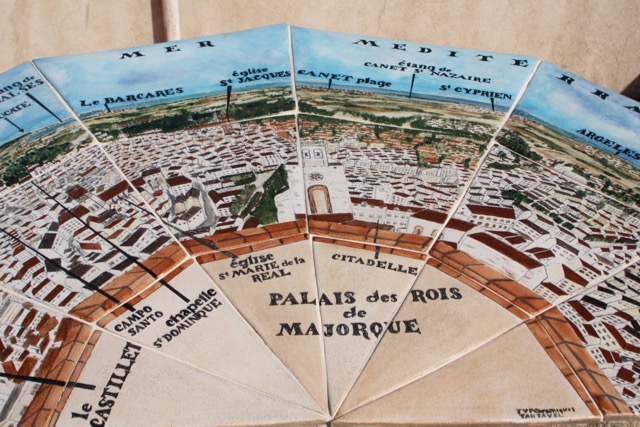 In Perpignan, his new castle was designed as a suitable home for the Royal Family, of a style to befit the Governor and King of the Kingdom of Mallorca and large enough to contain the court and impress visiting dignitaries. He chose the Puig del Rey, a hill within the city walls and dominating the countryside. It was the forerunner of many grand fortress palaces of the XIV century.

He supported the new religious orders and built convents and churches of the same traditional red brick and river stones as his palace. He made peace with the Andalusia Emirs and Magrebian rulers and with the Kings of Naples and Sicily. He blended Islamic inscriptions with Catholic decorations in his Royal Chapel.

A spot of brotherly bother…

In 1285, his brother Pierre III of Aragon forced his way into the town and, with 300 armed men, approached the still to be finished Palace. He wanted his younger brother’s share of their inheritance. Pretending to be ill, Jaume took to his room. He summoned Ramon Pau, his architect. “Any secret passages out of here?”

Well no, but a handy drain from the kitchens passed under a corner of the royal bedchamber, leading to the ramparts and out into a wood. As Pierre slept Jaume crawled into the drain and escaped.

When Pierre broke into his brother’s room in the morning all he found was Jaume’s pregnant wife. 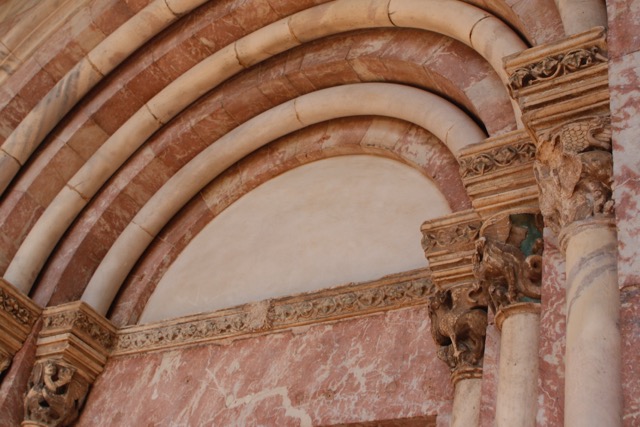 The King of Mallorca was safely in his castle at Laroque des Albères. Isolated in hostile territory, Pierre left Perpignan in a hurry.

Despite the brotherly conflict it was a period of peace and prosperity for Perpignan. Politics, commerce, religion, art all flourished. Textiles and leather were particularly successful.

He was succeeded by King Sanç (1277-1324). His was a harmonious reign. Perpignan continued to prosper. Sanç authorised the consuls of Perpignan to establish the first Loge de Mer. He released the imprisoned Knights Templar of Roussillon rather than burning them, as was their fate in the rest of France. He died aged 47, just after laying the first stone of the new Cathedral St Jean

His nephew Jaume III (1315 –1349) was the third and last King of Mallorca. Not a diplomat, he was killed in battle soon after selling Montpellier to the king of France.

During his reign however, musicians peopled the palace and exotic animals roamed the moat. Wolves, bears and lions for example…

Later, in 1393, King Pierre of Aragon, upset by the fall in the ostrich population, forbade their hunting by the palace guardians.

Despite these diversions the Aragonese kings were finding the palace outmoded. The last Royal visitors were Ferdinand II and Isabelle of Castille in 1493.

French troops had been in occupation from 1462 – 1493 during which time Perpignan suffered many sieges. A Citadelle was begun round the Palais Royal, Ferdinand added an arsenal and Charles Quint started a major reinforcement programme at the beginning of the 16th century.

After the Treaty of the Pyrenees in 1659, Vauban, Louis XIV’s military architect, planned further fortifications but, on the whole, Perpignan remained far from conflict.

Gardens grew on the ramparts and in 1958 the Palais des Rois de Mallorca became the property of the department of the Pyrenees-Orientales. On summer evenings concerts are often held in the gardens and the courtyard. Check the programme with the Tourist Office in the Palmarium or Palais des Congrès: 04 68 66 30 30

On Roman remains first mentioned in 673, that were in turn built on Visigoth remains, King James the Builder built the Chateau Royal at the same time as his Palais Royal in Perpignan.

You cannot miss it. It is the very heart of Collioure, imposing and grand, its walls plunging into the sea.

It is sometimes inaccurately known as the Chateau des Templiers. Not really suprising as their influence in the region was great and Collioure was their port. 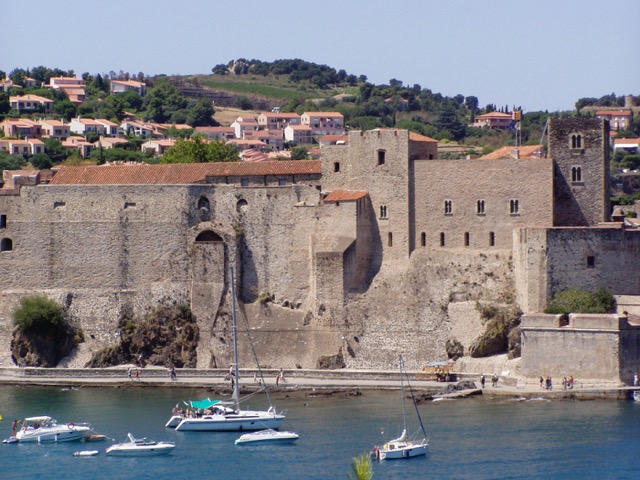 As the maritime power and strength of the Kingdom of Aragon increased, Collioure remained an important port and the Chateau Royal, the Summer Palace, was occupied by the Aragonaise Royal family until 1642 when the French took up residence.

The medieval village of Collioure was grouped around the Chateau. With the Treaty of the Pyrenees and under the orders of Louis XIV, Vauban made a few alterations to the fortifications, the most drastic of which involved razing to the ground a large amount of the existing town and obliging the townsfolk to rebuild further north, where the town is today.

The fortunes of the Chateau followed the fortunes of Collioure. It was occupied by the Spanish in 1793 only to be retaken by the French under Dugommier in 1794, since when it has remained French.

It was classified an historical monument in 1922 and used as a prison in 1939, the first concentration camp for the refugees from the Spanish civil war. 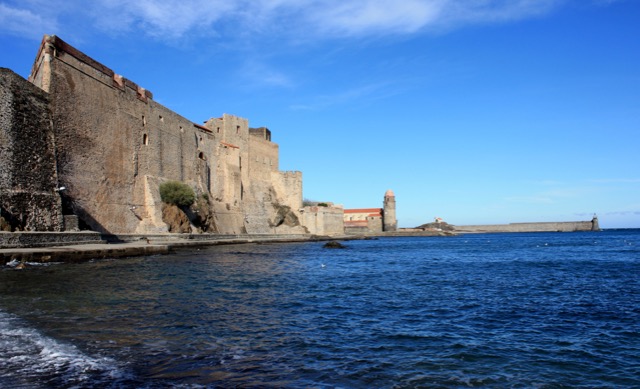 Germans took up residence during the Occupation and it was still a sad place at the end of the war.

Now, owned by the General Council of the Pyrenees Orientales, shows, markets and exhibitions are held within its ancient walls, music, dancing and festivals.

Floodlights and fireworks light up the castle keep, and, every All Saints weekend Antique dealers from Perpignan and all over the world display their wares in every nook and cranny of the castle.

It can be visited daily, the views from the ramparts are splendid and exhibitions provide a living record of Collioure’s rich military and maritime history.