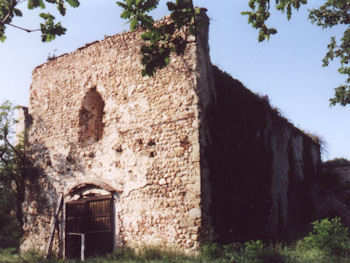 As you drive towards Trouillas on the D612, dominating the sea of vines, you will see the imposing 18th century stone and brick outbuildings of Chateau du Mas Deu. Slightly to the left is a thick grove of dark trees through which can be seen a tower, an old chapel and some ruined walls. This is all that remains of the 12th Century  Comanderie of the Knights Templar.

These soldier knights, returning to France from the Holy Land, made Mas Deu their administrative and religious headquarters in Roussillon. The walls were fortified, the house grand, a church was built. At the height of their power they controlled over 800 hectares and the largest vineyards in Europe. They drained lagoons, ordered the salt trade, farmed cattle, branched out into property development and mortgages. They monopolised Perpignan’s bakeries, possessed  mills, olive groves, tanneries and became successful bankers. They imported foreign fancy goods from their base in Collioure. They became extremely powerful.

On the 13th of October 1307,  acting in the name of the Pope, the King and the Church, all Knights Templar in France were arrested and thrown into prison.

Mas Deu became a centre of  the Inquisition.

Wine has been grown there since Roman times. During and after the time of the Templars this tradition continued. At the start of the 14th Century, Arnaud de Villeneuve, Physician to the Kings of Aragon, created the first ever Vin Doux in the cellars of Mas Deu. His method of stopping the fermetation of the naturally sweet wine with a small amount of eau de vie is used to this day. Through all the skirmishes and battles between French and Spanish in the centuries that followed, the vineyards kept producing. By1852, Mas Deu wines were dominating the local market as well as being exported all over the world.

Between the wars the property was split up and a number of the vineyard workers formed the Cave Coperative of Trouillas. The château and church continued to be used for marriages and christenings by illustrious families connected to Mas Deu’s past. By 1935 Astor and Rose Oliver owned the buildings and 25 hectares of vines, but, during the 2nd World War Mas Deu once again became a headquarters. This time of the Occupying German Army. The beautiful old buildings were used as an ammunition depot. On 17th of August 1944, before retreating, an explosion blew most of them up. All that remains now in the dark grove of tall trees is the north tower, some of the fortified wall and the chapel.

And the vineyards and the 18th century out-buildings. There Claude Oliver continues six generations of  family wine making tradition with flair and enthusiasm.
He is constantly working to replant and improve his vines, believing in quality over quantity.
« Wine is like love, » claims his father, a charming artist and poet, « without passion, it cannot exist. »

Claude makes sure his wine not only exists but is amongst the best of the region. He wins medals and prizes. He favours organic production. His mother was one of the first female oenologues in France. His wine bottle labels bear witness to his property’s Templar past, some wines are named after his illustrious predecessors, and others after his children. A tasting with Claude Oliver is an education, a pleasure and a delight. He will talk you through his crisp, well balanced whites, onto the rich reds, explaining the vinification, the grape varieties, how and when they should be drunk and enjoyed. In English, French or Catalan, his enthusiasm is infectious and his wines reflect the care and skill that goes into their making..

Ring 04 68 53 11 66 for information, or drop in as you speed across that long straight road towards Trouillas. You may be sure of a warm welcome.