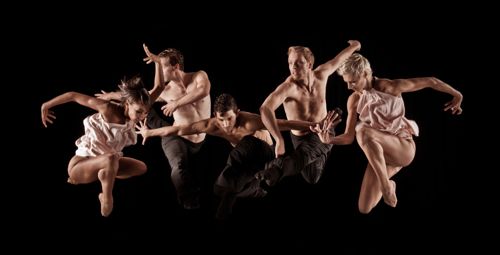 One of Canada’s most popular dance companies, they have presented more than 2,000 performances in 65 countries to more than 2 million spectators; and achieved a  high level of skill in the ever-evolving art that is contemporary dance.

Israeli-American choreographer Barak Marshall was inspired by the inner turmoil and battles we all wage. “Life is a constant struggle,” he says, “in which we are continually faced with conflicts with regard to culture, gender, species.” Between men and women, in particular, compromises must be made to achieve balance and harmony. This piece revolves around the character of Harry, who struggles to overcome forces both physical and existential.  A score subtly combining jazz, Israeli folksongs, and traditional music, with alternating group sequences, trios, and duets in an extravaganza of  dynamic and humourous dance.

Wander around Perpignan and you can’t miss the large construction along Avenue Général Leclerc and the  giant concrete bubble. This bubble is ‬the ‘grenat,’ a large theatre space accommodating 1100 guests and the venue of the Théâtre de l’Archipel. Designed by renowned French architect Jean Nouvel, the theatre brings a touch of prestige to the previously rundown edge of the city.‬

‪The new theatre and cultural precinct is designed to be an artistic & cultural hub for the city. Welcoming local and international artists, it is hoped the precinct will encourage a spirit of ‘ multiculturalism and social tolerance’.‬