A few words from the author…
One of my first attractions to the Côte Vermeille, were the paintings of Martin Vives, one of the great painters from Perpignan. His paintings, full of life, love, and faith in the PO, were overpowering and life-changing for me.

When I was eighteen a friend and I rode a Vespa from Barcelona to Paris. We took the coastal route and passed through Banyuls and Perpignan. Little did I think that in the future we would come to live and become accepted in the village…not fully-fledged Banyulancs, but nearly so.

My wife and I purchased a house in Banyuls-sur-Mer more than two decades ago and have spent all our summers there without fail. We have welcomed family and friends, made many local friends and come to know the region and love all aspects of its people and culture. 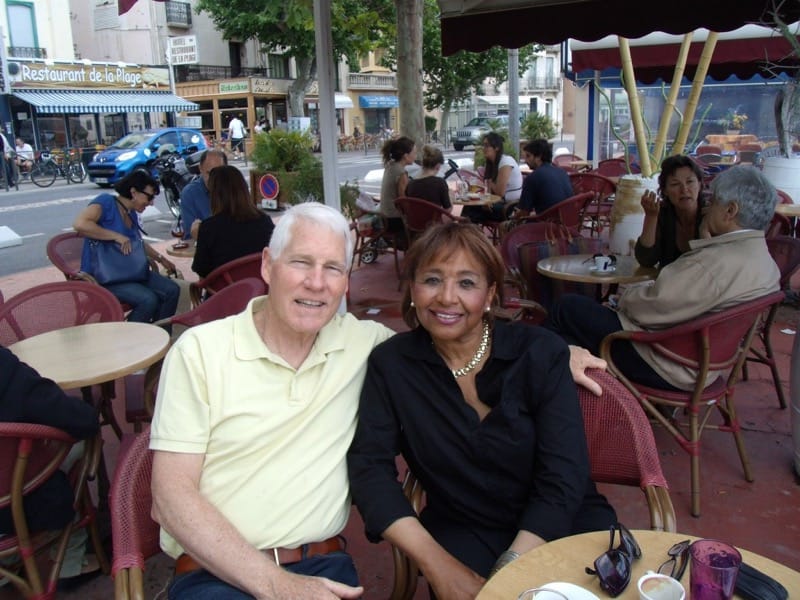 I have always wanted to write. My earlier novel, the Master of Cabestany, was a direct result of living in Banyuls and learning about this special and mysterious 12th century sculptor.

We visited all his artwork in Spain and France. The story developed from close analysis of his magnificent œuvre.

I began to learn about WW2 and the occupation in the area. Our friends opened up to us about their personal experiences, especially when I expressed great interest, being the son of a US soldier.

Over the years, many of these friends have departed, but their honesty and revelations remained with me.

I began writing All the Clouds four years ago and completed it this autumn. It’s a fictional treatment of these true experiences and actual documents, combined with extensive research. It tells the story of a young couple in Perpignan during 1941 to 1943.

It recounts their efforts to come to terms with the defeat of France, the surrender and formation of a collaborative government, the occupation, and their amazing and dangerous efforts to resist and survive as young people.

This is a surprising story, unique as seen through the eyes of two idealistic young lovers in the south of the country. Their own lives and families added additional challenges to their relationship with some life-altering consequences due to the occupation.

It was a terrible time without an imaginable future and when friends could never be trusted. Not a time for lovers.

An electronic version will be available soon.

All the Clouds is set in and around Perpignan in southern France during World War II. This is the story of Paul, a singer, and Gabrielle, a dancer, who meet and fall in love while rehearsing for a musical production.

Their love affair blossoms as the occupation becomes increasingly more draconian and dangerous. As a result, Gabrielle discovers a family secret that changes everything, and they both become deeply involved in the Résistance.

Based on real accounts of life during this time, the novel tells a gripping, yet unsentimental, story, evoking daily life during the occupation: popular music, the local art scene, and the difficulties of daily survival.

The young couple becomes caught in the treacherous whirlpool of resistance against the Vichy government and the German occupants. This exciting and startling novel will be of special interest to those who are familiar with French Catalonia or who are curious about life during the occupation.