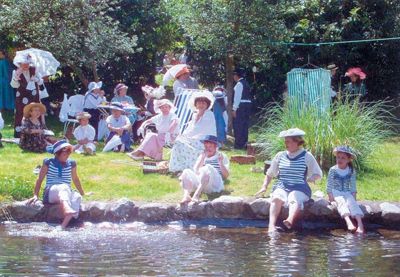 In 1845, the Pacha Mehemet Ali was king of Egypt. He was surrounded by advisers from France, notably one Doctor Clot. The doctor was treating the king’s son, Ibrahim Pacha, who suffered seriously from bronchitis. Dr Clot entrusted Ibrahim Pacha to his friend Doctor Lallemand, who taught at the faculty of medicine in Montpellier. The latter recommended Ibrahim Pacha to seek treatment for his condition in Vernet-les-Bains. The prince, accompanied by his substantial retinue, arrived in Vernet on January 8 1846. His stay there was prolonged and his health improved rapidly. Thus was launched Vernet’s international fame as a health centre.

Very soon, the cream of English society thronged the village. Facilities for visitors were improved; magnificent hotels were constructed around the park. Brilliant evening parties were held in the Casino. Celebrities of the day came to Vernet: Rudyard Kipling, the Princess of Battenberg (daughter of Queen Victoria), Lord Roberts and his wife, Scott O’Connor and others. To recall this period,known as the “Belle Epoque”, a festival of that title is held each year during the weekend of the Ascension (usually in May). The festivities are held over a period of four days. The people of Vernet invite you to their “costume dramas”, in which episodes from the Belle Epoque period are reconstructed, and to enjoy the musical presentations, the exhibitions, the processions of vintage cars, and the many other activities and entertainments which are held during the weekend.

Built in 1880 by architect Viggo Dorph Petersen, the Vernet casino is typical of the architecture of the period in Vernet. It is part of the ‘ quartier thermal’ and used to be a théâtre frequented by the international aristocracy. Today, with its park, ‘kiosque à musique’, villas and hôtel du Portugal, it remains an important part of Vernet.