Adieu to the French Kiss

Protect yourself against the various flu bugs floating around in France 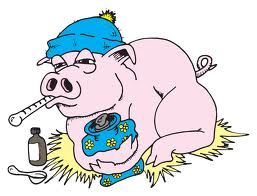 Once again, the prefecture of the Pyrenees-Orientales warns of the potential dangers of flu, reminding us that last year around 5 – 10 per day were infected.

This year, the flu bug appears to have hit a little later than usual, thanks to a mild winter so far, but an average of 905 out of every  100,000 people are nevertheless expected to be  affected.

Flu vaccines are available to buy from your local chemist.

It is simple in France to protect yourself  against the  common strains of flu.

Buy your  vaccine at the chemist for around 7 euros and make an appointment with a local doctor or nurse to administer it. Anybody can do this.

Most chemists will now also administer the vaccine, either when you buy or on a specified day of the week.

Many French chemists have a wide range of homeopathic remedies so if, like me, you are a little needle phobic but should have a flu jab, ask your pharmacist for ‘Influenzinum’, homeopathic. This remedy of granules is made up each year according to the current virus – but beware! It is unlikely to be as efficient as the nasty needle.

The jab is recommended for over-65s and for those with health problems that could make them more vulnerable to the bug (heart or lung problems etc). If you are amongst the above, you will probably receive a letter recommending the vaccination. Pregnant women and other at risk group may receive this free of charge.

Despite the ease of organising your own flu jab,  less than 10% of  the population opted for it last year.

If it too late for a flu jab, bearing in mind that they take 15 days to become effective, some basic rules of hygiene can go a long way to avoiding the bug.