adapted from ‘Lost In The Stars’ by Kurt Weill & Maxwell Anderson 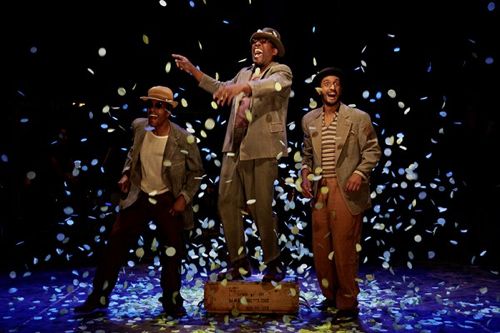 Lost in the Stars is a musical with book and lyrics by Maxwell Anderson and music by Kurt Weill, based on the novel Cry, the Beloved Country (1948) by Alan Paton. The musical premiered on Broadway in 1949,  the composer’s last work for the stage before his death the following year.

This  tragic story, set amidst the then (1948-49) newly enacted apartheid laws in South Africa, unfolds like a Greek tragedy tangled up in a mid-20th Century version of the story of the prodigal son–except in this version the father does not wait for the son’s return, but sets forth in search of him in the slums of Johannesburg.

It is August 1949 in the South African village of Ndotsheni.  Apartheid. Black against white. Reverend Stephen Kumalo, learns that his sister is in trouble, and travels to Johannesburg to help. Whilst there, he seeks out his own son, Absalom, just out of jail, and prepared to do anything to avoid slave labour in the  gold mines.

He kills Arthur Jarvis, a white friend of his father, during a robbery, and returns to jail.
At the trial, Absalom’s friends lie about their part in the robbery and are freed, but Absalom himself, truly repentant, takes the path of truth and is sentenced to hang  Stephen looses his faith.

Love or hate the exterior look of the place, the auditoria it contains are excellent and the shows put on there are of the highest international standard. The biggest auditorium in the complex is called “Le Grenat” (the maroon blob in the picture) and I admit it took me a while to realise that this is a blatant visual reference to Perpignan’s reputation as the centre of garnet jewellery-making.

This is one of the finest performing arts complexes in France, with a performance programme to match, so if you have not already checked it out, I urge you to do so. More information at www.theatredelarchipel.org or call in (between 12.00 and 18.30) for their free 100 page brochure.