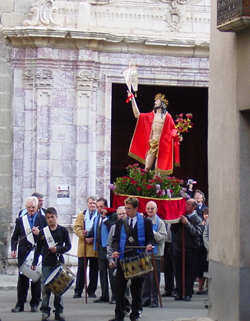 Unique in the Pyrénées Orientales, this religious celebration of the Procession of the resurrection and “Régina” songs (140 strong choir and 40 musicians) is a typical example of the Catalan heritage, which Ille sur Tet has managed to preserve.

Whilst Perpignan, Collioure and Arles are parading death in the Festival of the Sanch, in Ille sur Têt a dawn drum roll announces life; both the Resurrection and the beginnings of spring, a rebirth and re-awakening of nature, celebrated annually in this age old Illois custom

At exactly 8 a.m, accompanied by a sombre drumbeat, the ’statue du Ressuscité (Resurrection) and the ‘statue de la Vièrge’ (virgin) arrive from opposite ends of the place de la mairie. Upon the shoulders of ’porteurs’, they salute each other three times. This is the ‘acato’. Believers and non-believers alike find this unique ceremony moving and memorable. 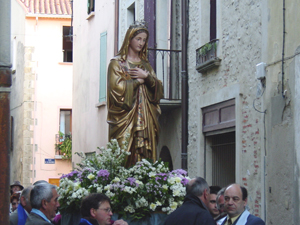 Suddenly, the first Régina, the Régina de Coll, blasts out, a 130 strong choir, accompanied by 40 musicians. Follow the procession to the Jardins de la Rodona, where the second Régina, the Régine de Colomer is performed.

The Regina is  a chorus starting with three voices, moving onto trumpet, tenors, solo, seperate sections of the band, and building up to the whole choir and band. It is so named after Jean Colomer, resident of Ille at the beginning of the 19th century, talented organist at the église Saint-Etienne, and music teacher in Prades for nearly 50 years.

Coll and Colomer were two talented composers who wrote these ‘Réginas’, religious music for Easter.