In the early afternoon, the Trabucayres, in full costumes, armed to the teeth with trabucs, will invade the town of Amélie in a procession through the streets.

Firing their guns (represented by explosions of firecrackers) onlookers will be encouraged to follow as they steal items in shops, and flee, leaving behind  gold coins (chocolate) – rubies (red bonbons and numbered tickets for the followers to find.

Later, they will distribute their loot according to the number on the tickets they have left in their trail.

The event will end with music and BBQ. 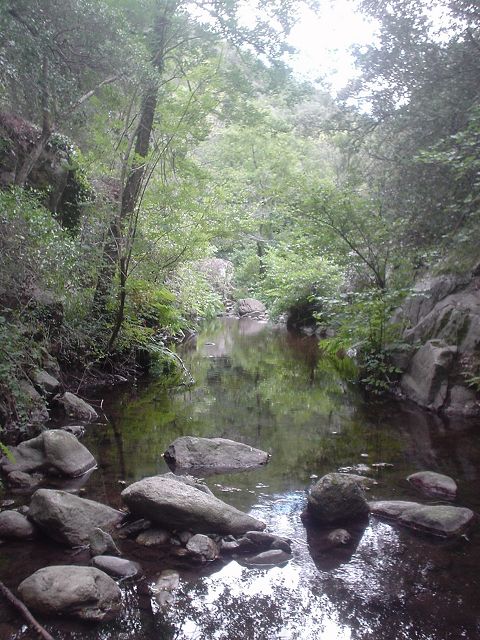 In 1840, following the death of Ferdinand VII, Don Carlos attempted to establish Salic law in Spain, so he could reign in place of the Regent Marie-Christine. Salic law was a rule of succession practiced in certain royal and noble families of Europe, forbidding females to succeed to titles or offices within the family.
This led to war between supporters of Don Carlos, the ‘Carlists’ and supporters of the Regent, the ‘Christinos’.

The Carlist army terrorized the Vallespir, and from this army, the Trabucayres were born, bandits and highwaymen, named for the ‘trabucs’ (blunderbusses) with which they were armed. Along with their leader, Jean Simon, nicknamed ‘Tocabens’ from the catalan ‘toca’ meaning touch, and ‘bens’ meaning well (shoot well), they established their headquarters in Las Illas, near Maureillas, for its proximity to the Spanish border and ease of smuggling.

In February 1845, thirteen bandits left Las Illas for Gerona where they attacked the Perpignan to Barcelona coach. Passengers were terrorised and robbed, and three men were taken as hostages. One died on the two day return walk, another was shot when he tried to escape.

They split up, one group heading for Coustouges, the other, along with the remaining hostage,
took refuge in the ‘grotto de Bassagoda’ near Las Illas. From this cave, Jean Massot, 16 years old and the remaining hostage,  wrote letters to his mother, asking her to pay 65,000 francs ransom – which she did not have.

Realising they would get no money for their hostage, they murdered him, cutting off his ears which were later found in a basket by a young shepherd, and used as evidence against them at their trial.

Hearing of a plan by police and customs officers to capture the bandits, they fled to Mas de l’Aloy in Corsavy, where they were eventually surrounded, killed or captured and imprisoned, first in Ceret, then Perpignan. After a trial which lasted over a year, four were guillotined in Céret and Perpignan, and others condemned to hard labour.

Now hopefully bandit-free, there are some fantastic walks around Las Illas, in the tracks of the Trabucayres.