At this time of year the P-O transforms into a kaleidoscope of wildflowers. Lesley McLaren takes us through a few of the more common ones to be found in the verges, hedgerows and rocky slopes of the Albères and Vallespir. 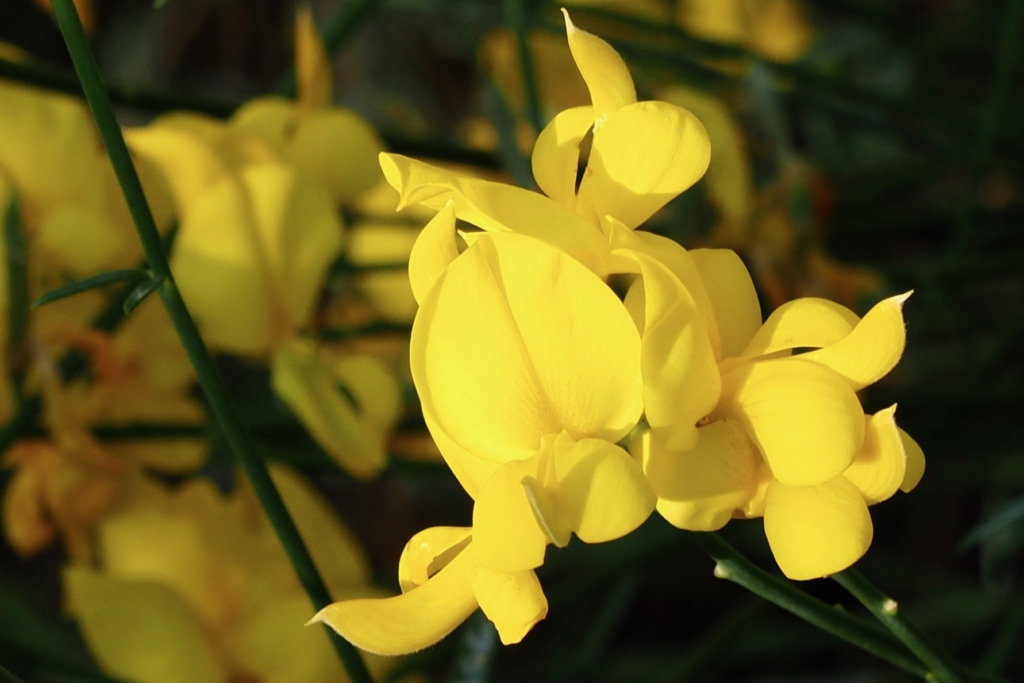 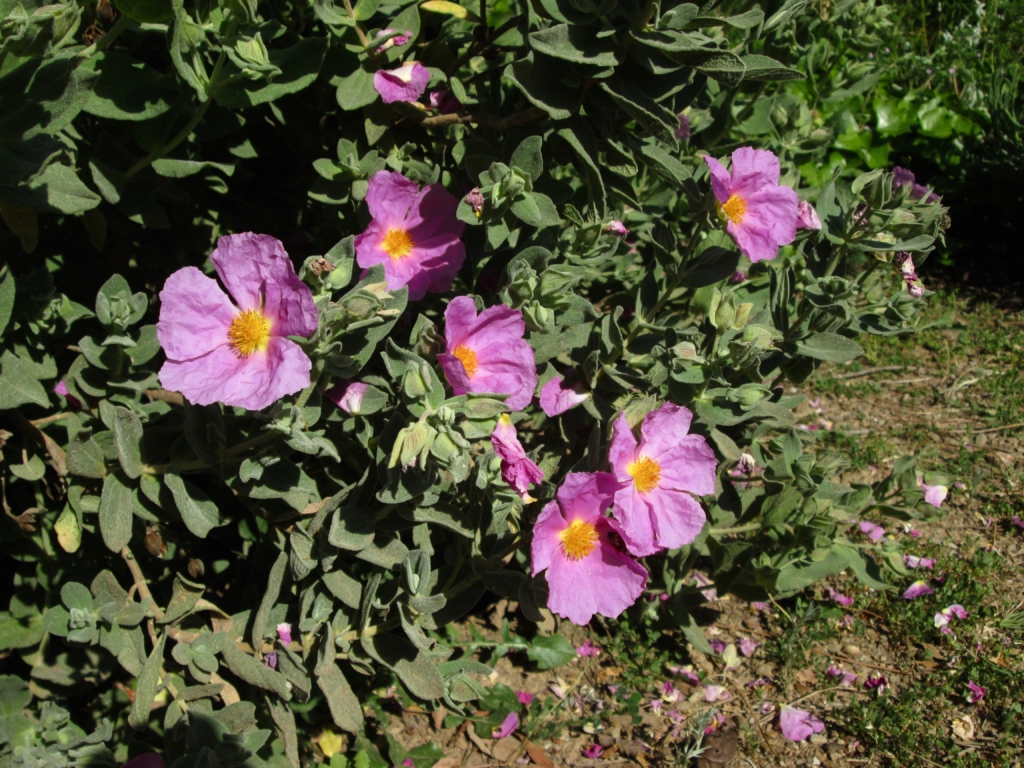 Rock-roses are everywhere in the P-O – from coastal cliffs to mountain slopes. Not only do they tolerate very hot temperatures but also the cold – down to -12°. Their foliage is evergreen, highly scented, and the resin from some varieties is used in perfumery. 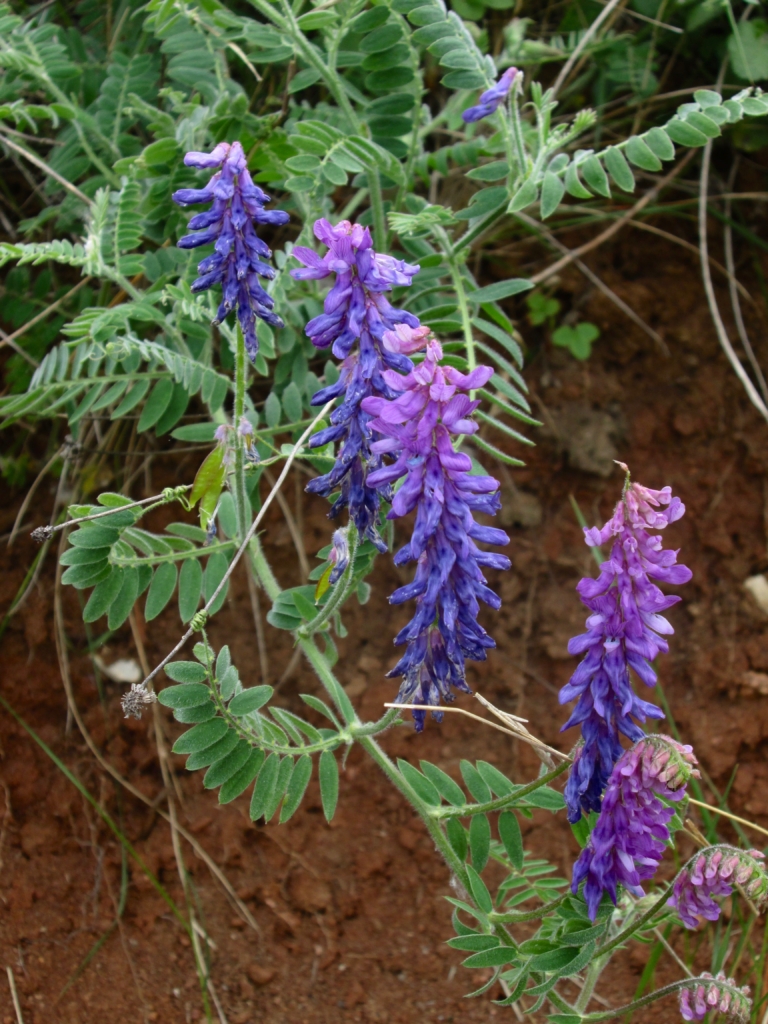 Tufted vetch (La Vesce craque) is a member of the pea family. It has climbing stems, subterranean runners anchoring it to the ground, and deeply penetrating roots. The result is a robust green tangle, from which eye-catching violet flower spikes emerge. 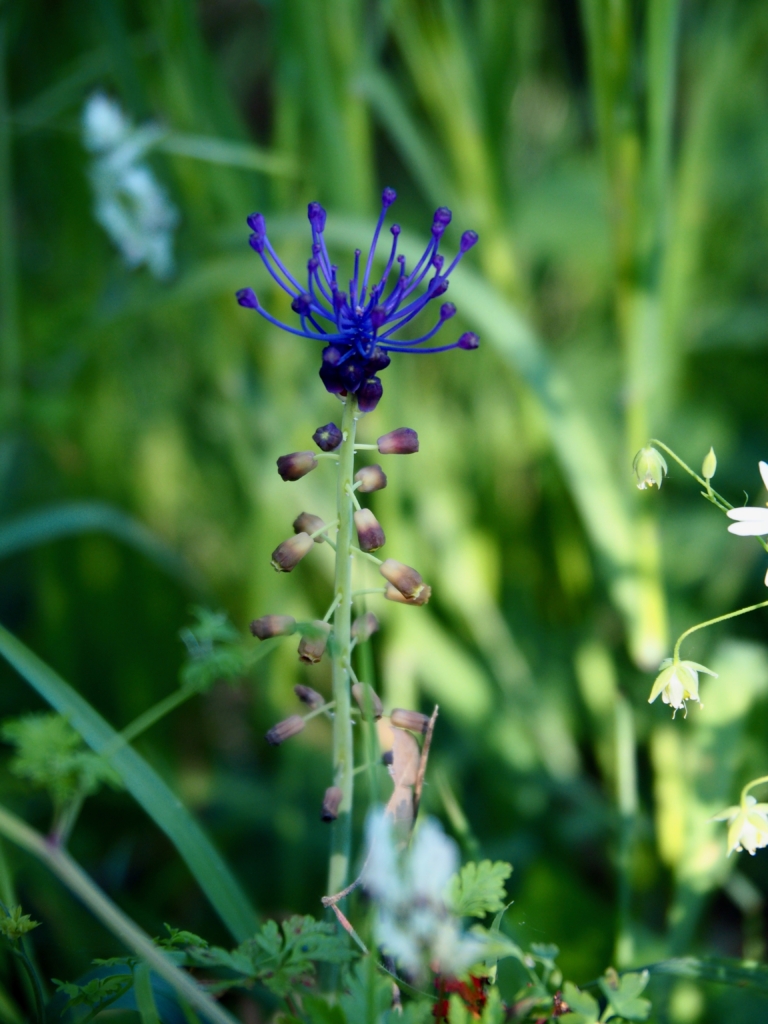 Tassel hyacinth (Le Muscari à toupet) belongs to the asparagus family. Wherever this grows, so might that other variety that is gathered for omelettes. 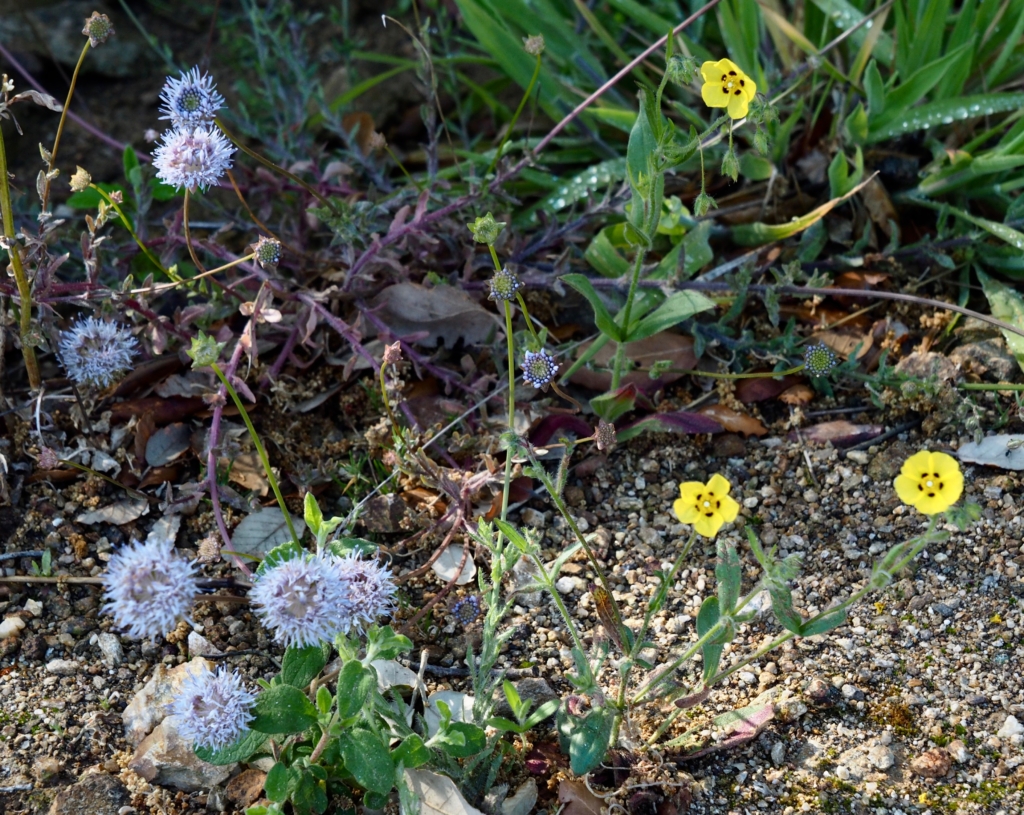 A type of scabious (La Scabieuse) with spotted rock-rose (L’Hélianthème taché). Each rock-rose flower lasts only one day. Petals often start to fall by lunchtime! 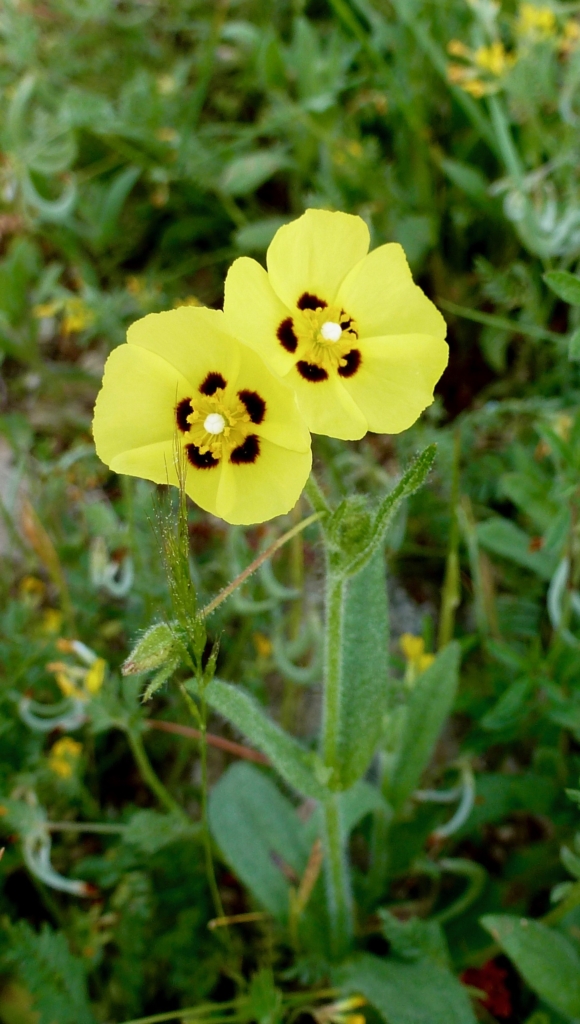 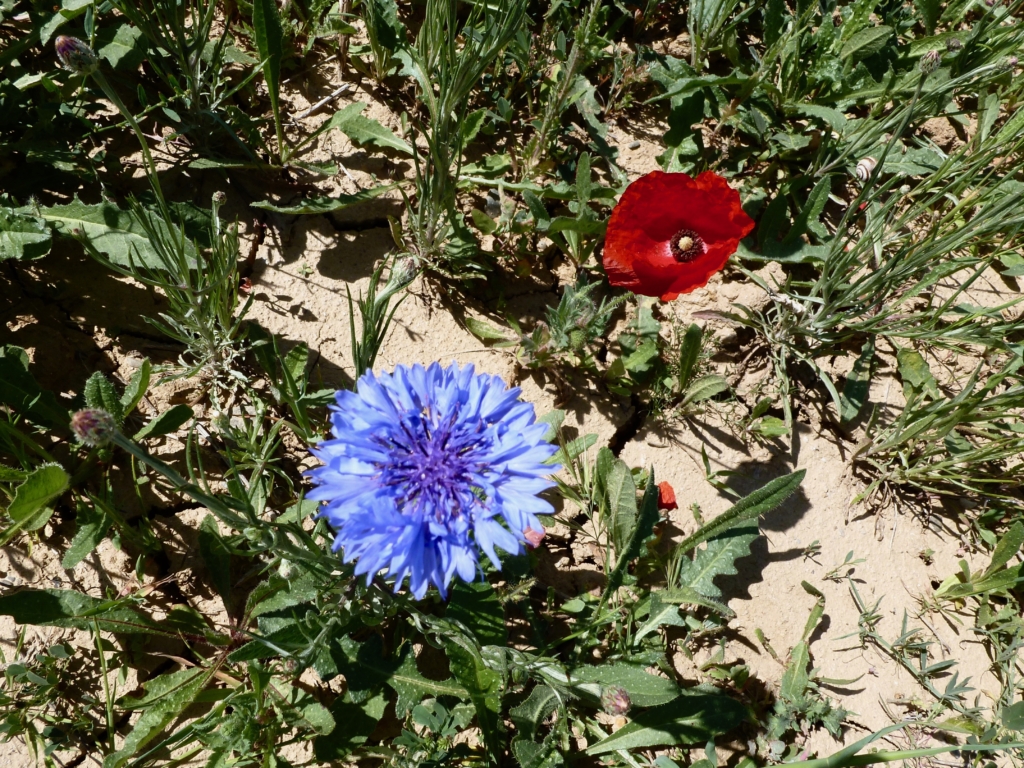 Poppy (Le Coquelicot) and cornflower (Le Bleuet). British and French symbols of the 1914-1918 War growing side by side.

A lot of white flowers appear at the same time in April – but they aren’t all the same species. 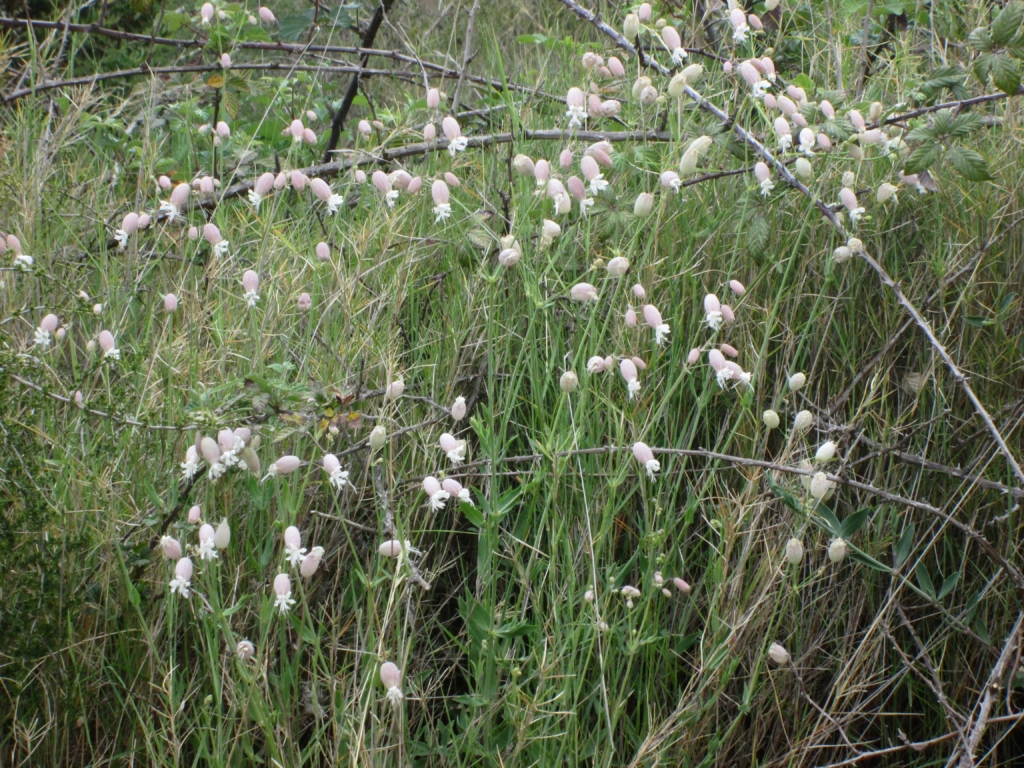 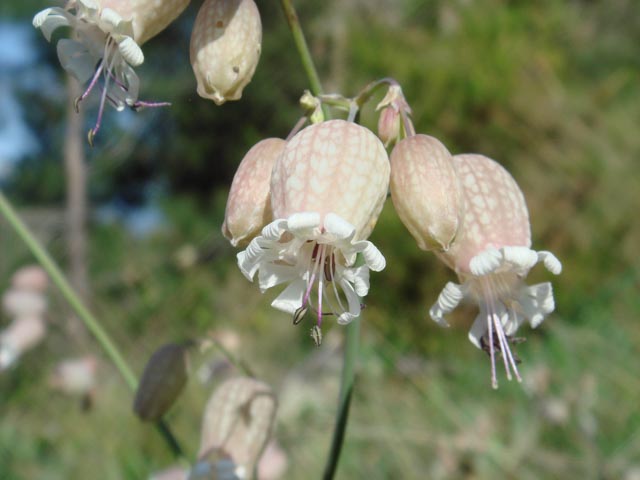 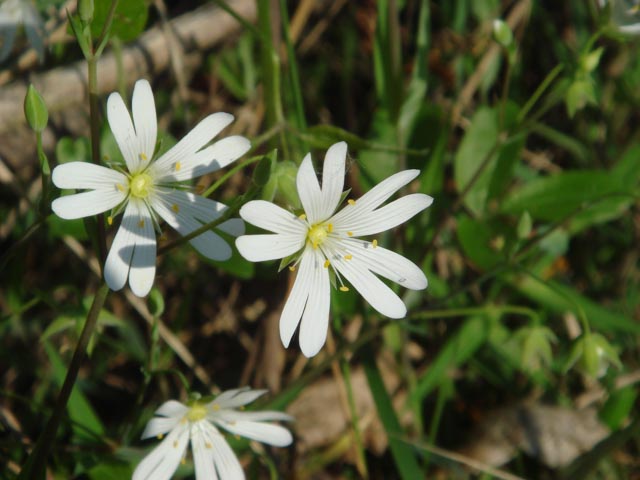 Greater stitchwort (La Stellaire holostée) has many other names including Wedding Cakes, Star-of-Bethlehem, Daddy’s Shirt Buttons and Snapdragon – the latter because its stems are brittle and easily break. Ripe seed capsules can be heard popping in late spring. Look out for it in shadier areas by roadsides. 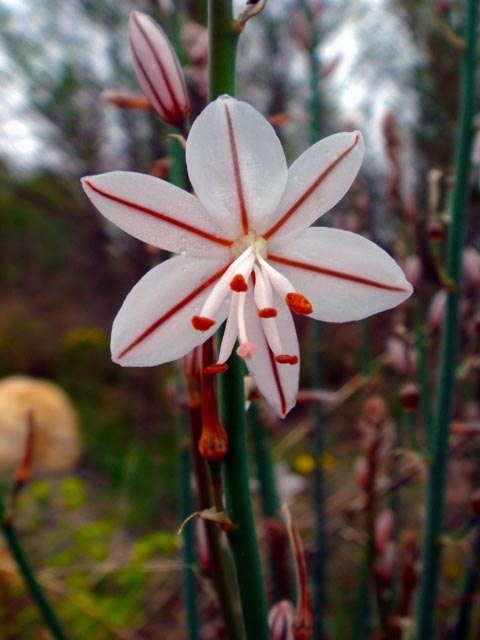 Hollow-stemmed asphodel (L’Asphodèle fistuleux). This tall beauty (up to 70cm) is an annual or short-lived perennial, whose flowers close at night or in low light conditions. Another, less attractive name is onionweed. 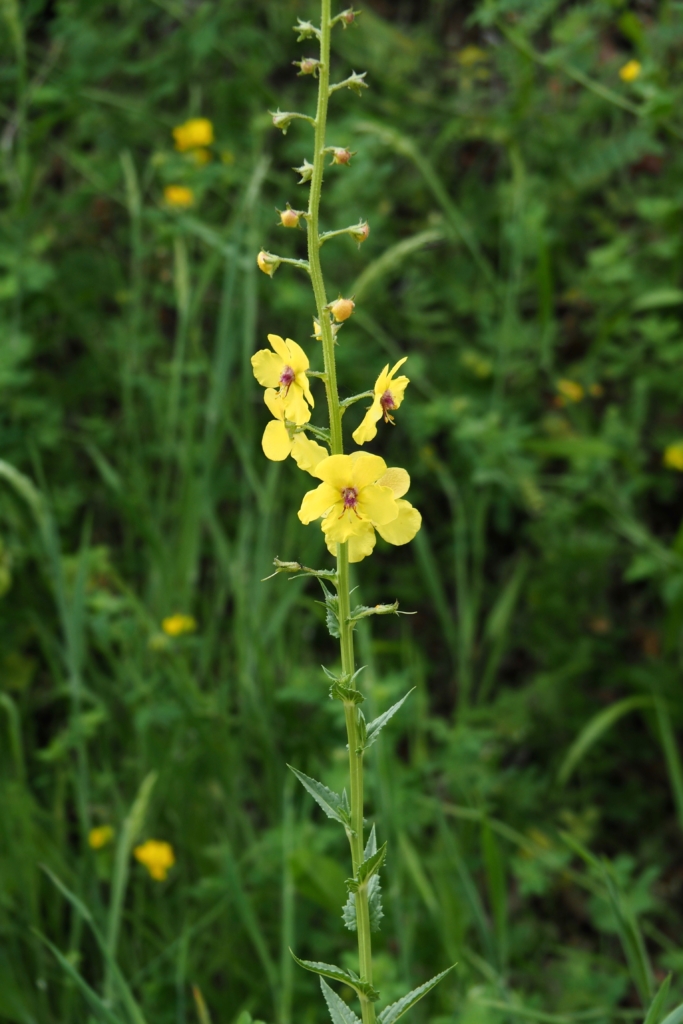 In Roman times the spike-like flower clusters of the common mullein was dipped in grease and used as torches. And Native Americans used its velvety leaves as moccasin liners to protect against the cold. 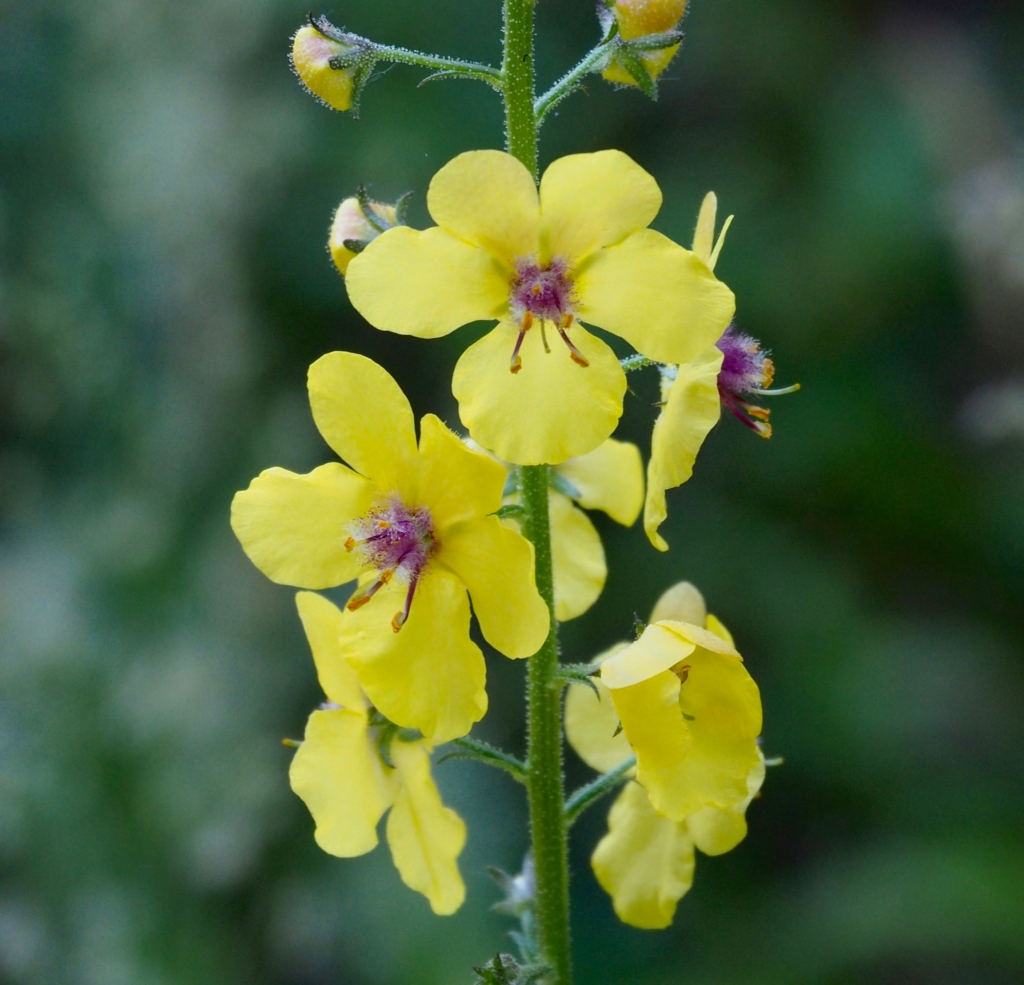 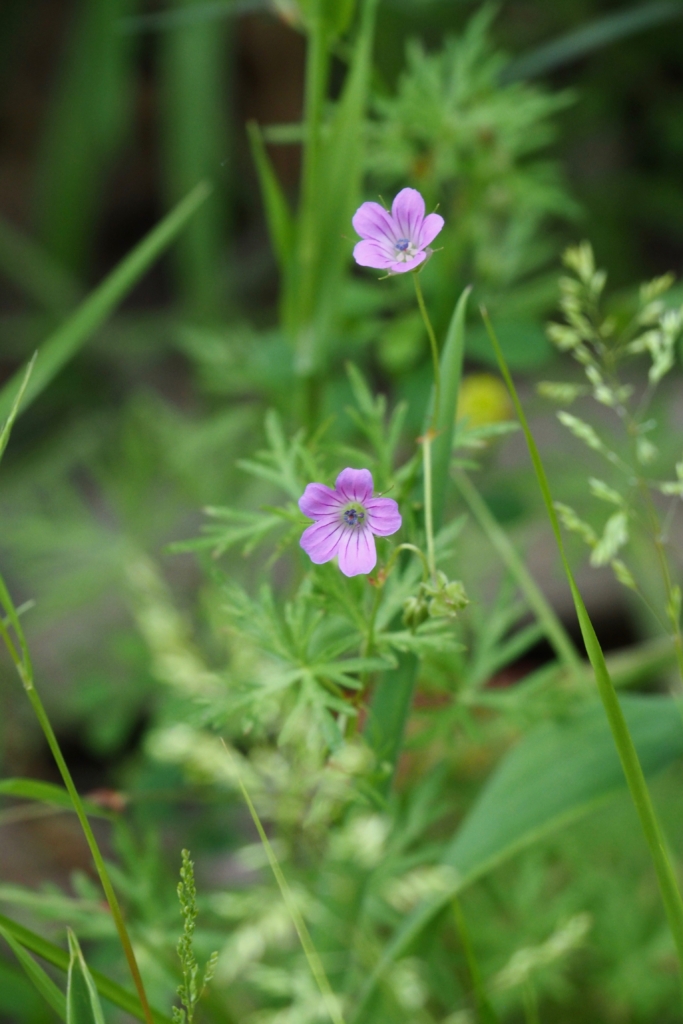 Cut-leaved cranesbill (Le Géranium à feuilles découpées). You’ll only ever see one or two delicate, lightly striped flowers peeping through the greenery in verges. “Cranesbill” is a reference to its beak-like seed capsule – reminiscent of the long beak of a crane. 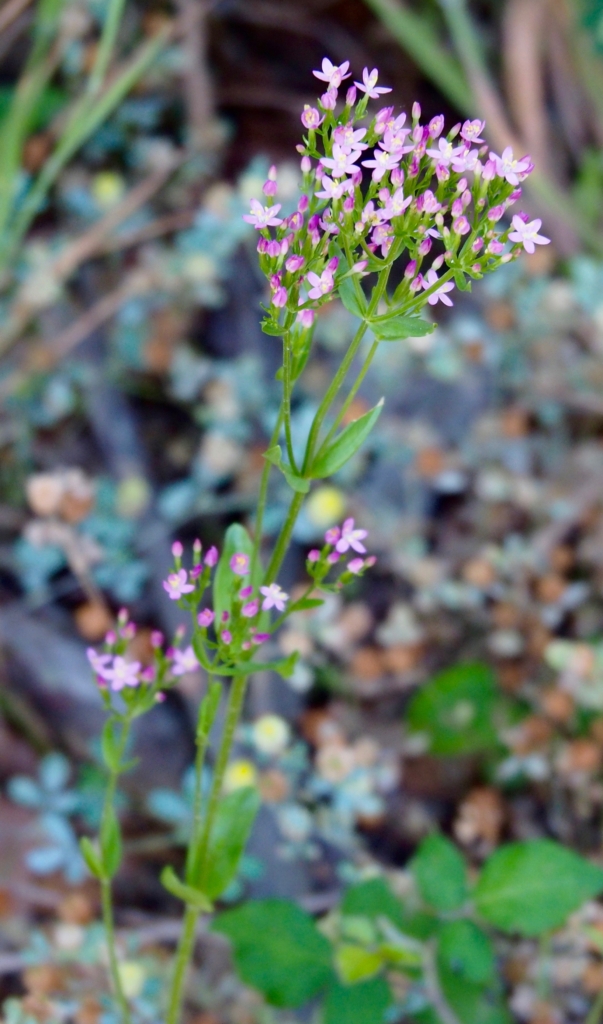 Common centaury (La Petite-centaurée commune). It flowers every year and, like other members of the gentian family, those tiny pink flowers close during the afternoon. 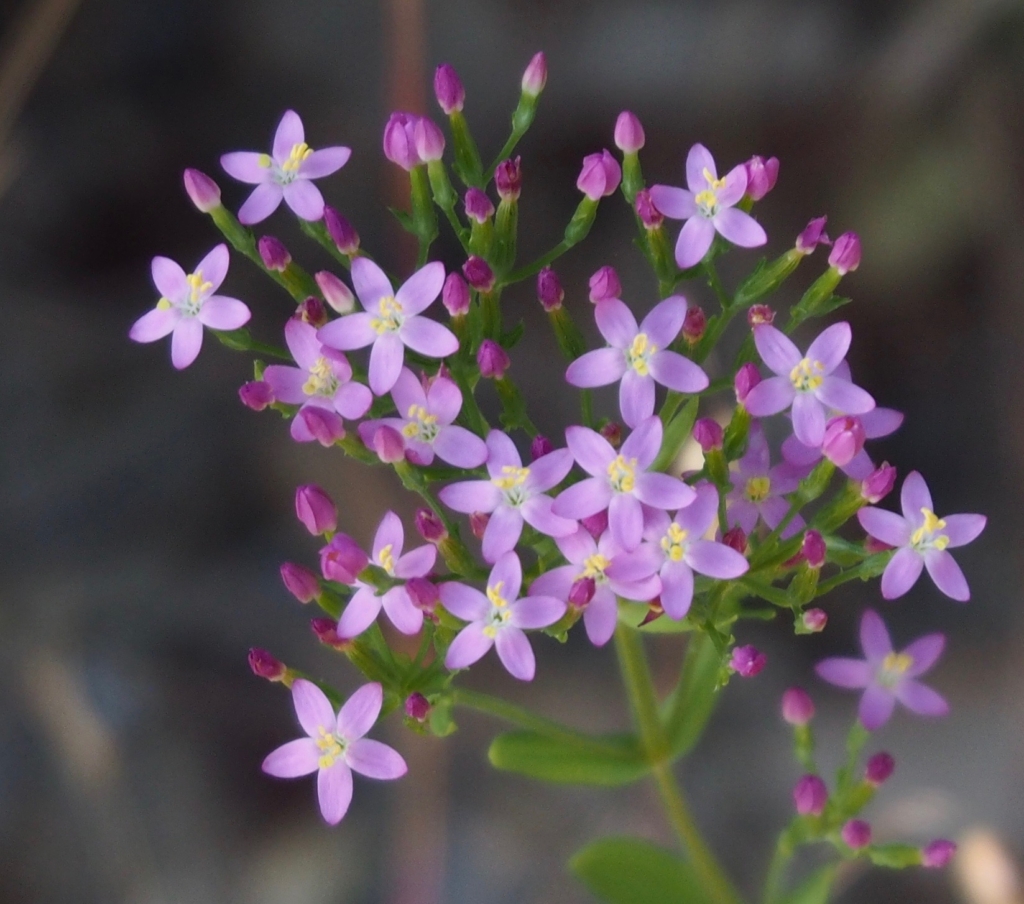 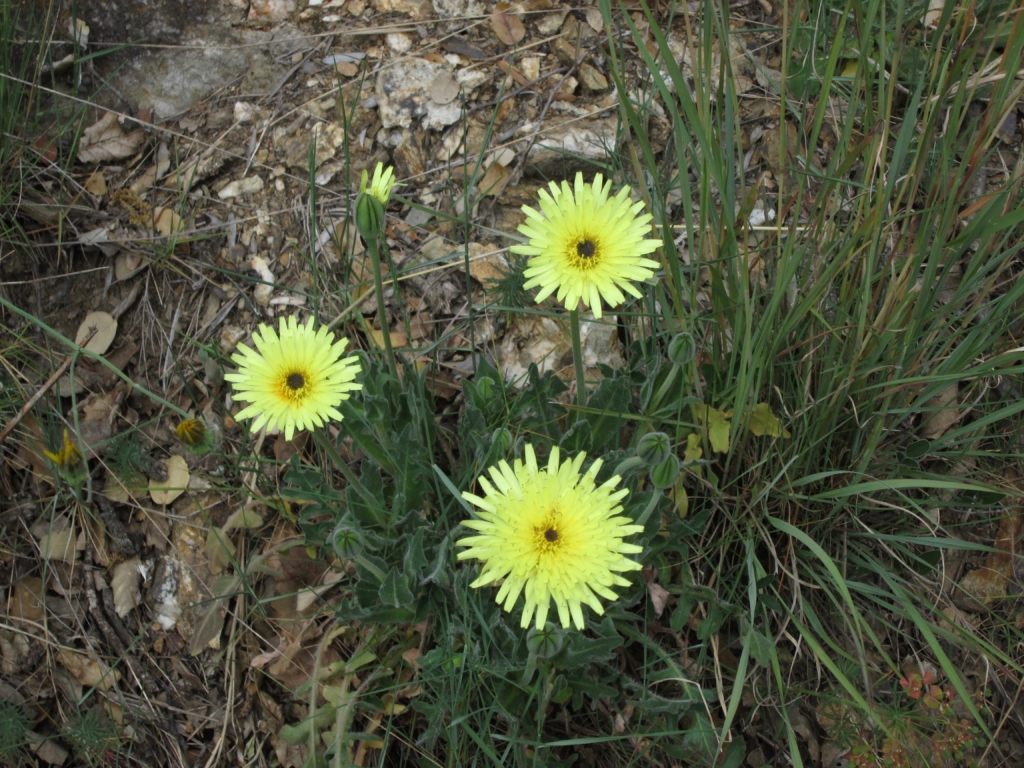 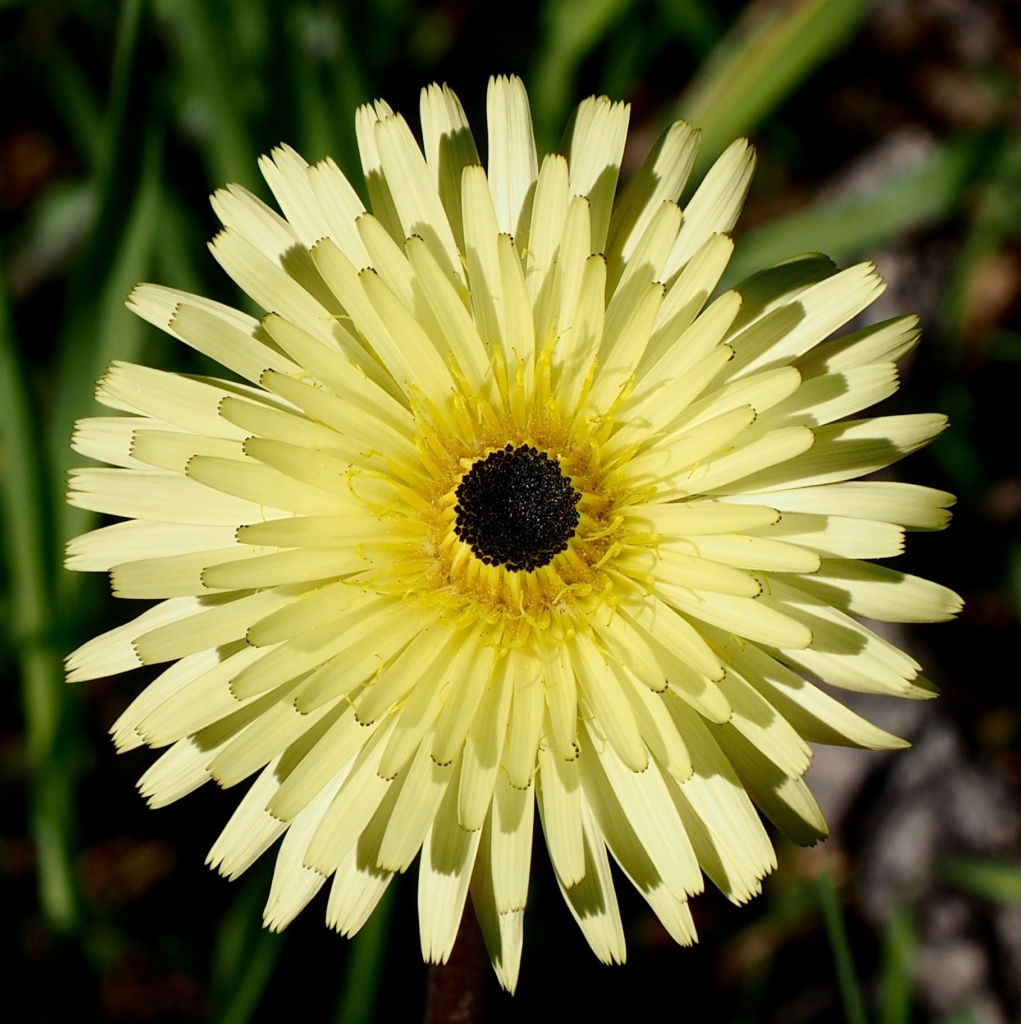 A regular in our gardens as well as the countryside, this close relative of the dandelion – and equally impossible to dig up! – is a type of hawkweed (Astéracée), which belongs to the sunflower genus. 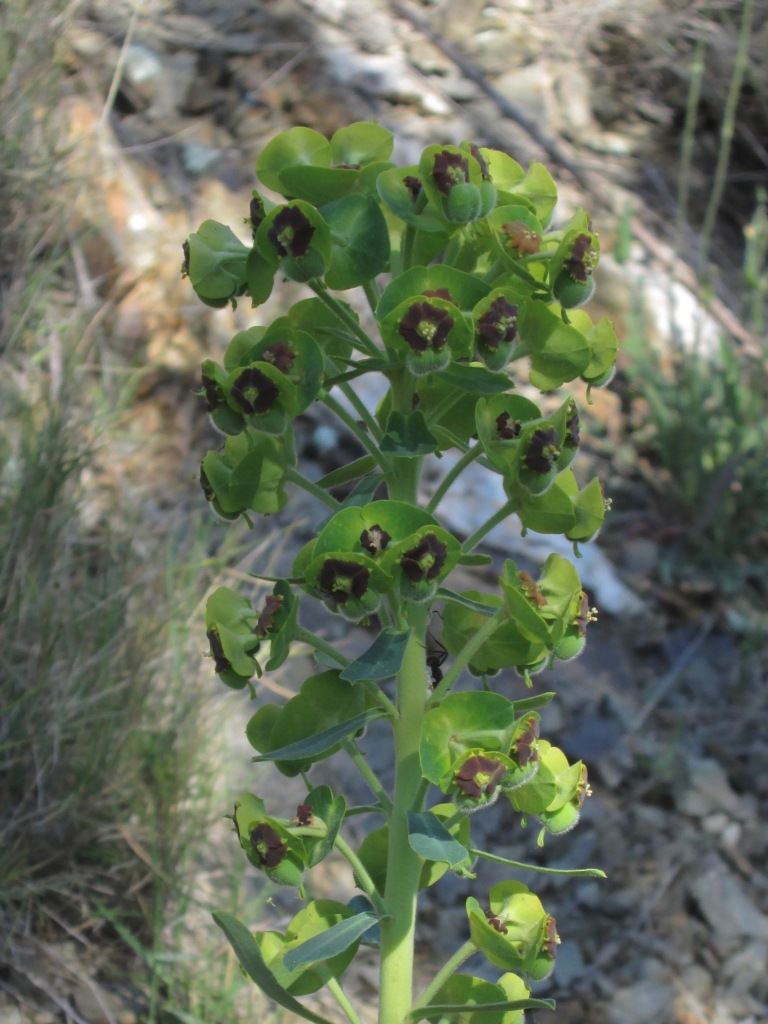 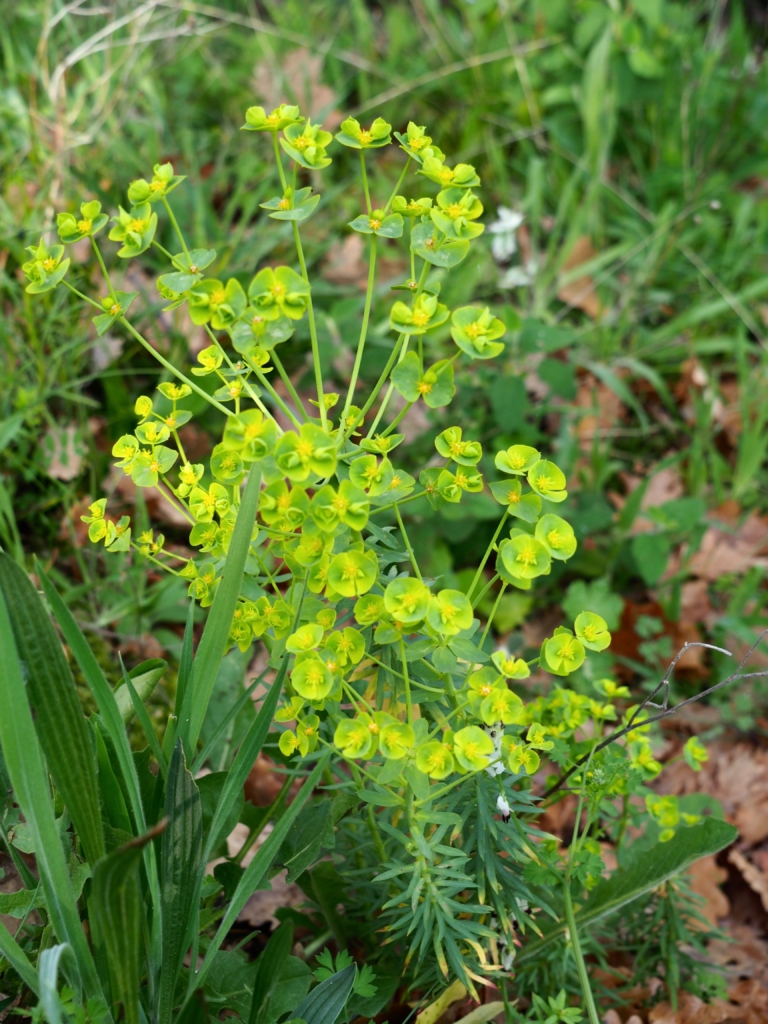 Several types of spurge or euphorbia (L’Euphorbe) are prolific across the region. Easily overlooked – camouflaged among tall grasses – these might not strike you as pretty, they’re interesting close up. No wildflowers should be picked, but especially not spurge. Broken stems produce a white latex sap. This helps the plant to heal itself, but beware: it can be irritating to  skin and dangerous if it gets in your eyes or mouth. 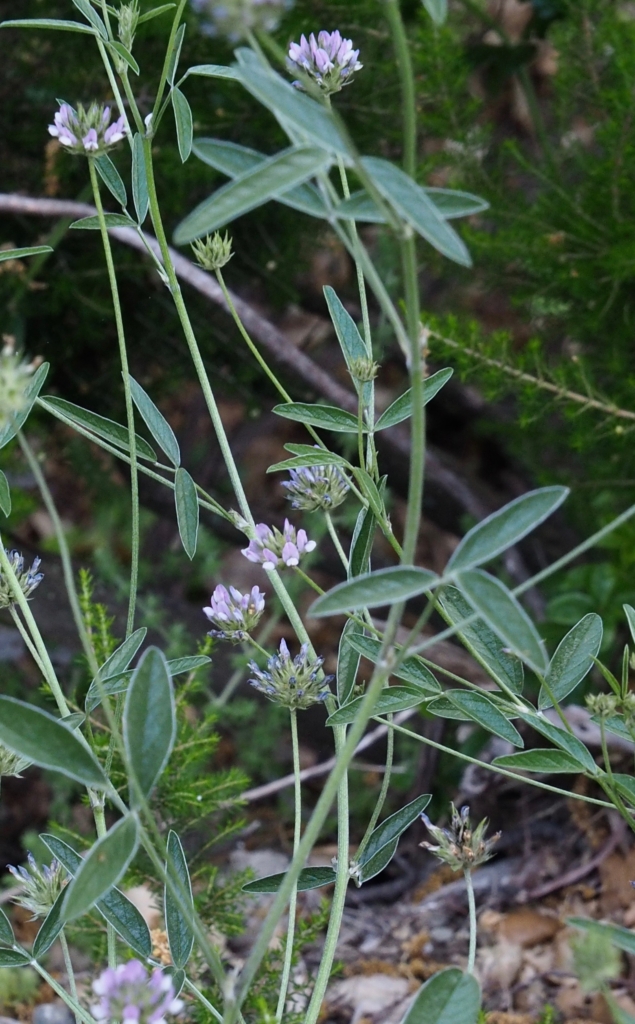 This must be a type of clover (Trèfle)? It is three-leafed, like all clovers, but these leaves are long and narrow, and it grows tall – around 30cm. Spotted mid-May beside tracks in the Albères and Sorède. If you can identify it, please let me know!** 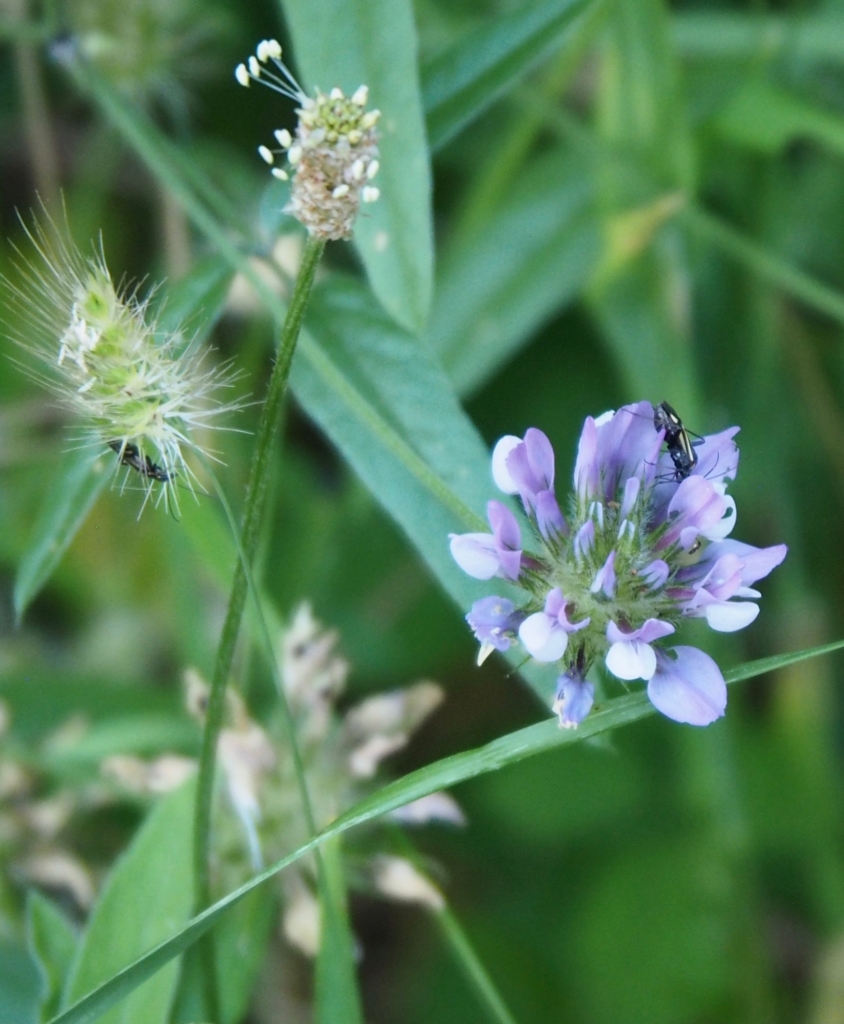 ** Huge thanks to several readers of PO Life who identified this mystery flower as Pitch Trefoil (La Psoralée bitumineuse), so named because its  leaves apparently have a tarry smell!

Lesley is one of “The Warblers” – a group of natural history enthusiasts based in the P-O. Their blogs and photo galleries can be found on Mediterranean Pyrenees

All photos for this article are by The Warblers.