With Tim and Chris Parker

Park in Banyuls (paying April to October 1st) and head to the Tourist Office on the promenade. 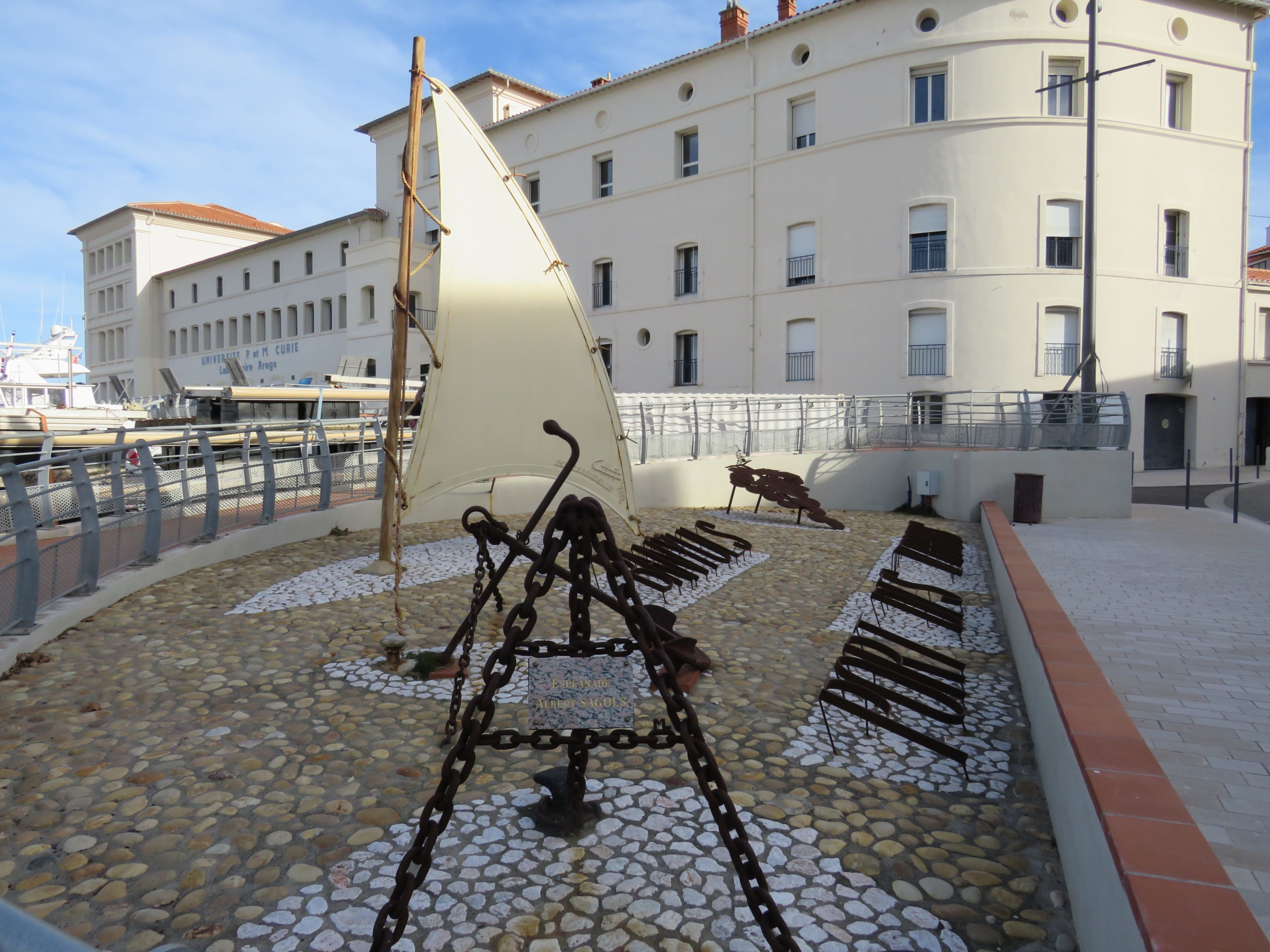 The original Banyuls aquarium was created in 1885 by the founder of the Arago Laboratory, Professor Henri de Lacaze Duthiers. It was a serious affair, based around education and science.

Today the oldest on the French Mediterranean coast, the aquarium has undergone a state-of-the-art make-over. Still educational, still scientific – but also a whole lot of fun! Bright corals, octopus, eels, fish of all shapes, sizes and hues, an exciting glimpse of local underwater life in a milieu created with care, the fish released back into their natural habitat when they grow too big for comfort in tanks.

The ‘Jardin Méditerranéen’ of the Biodiversarium, hanging from the cliffs above the valley of Baillaury, gives a fascinating insight into Mediterranean plant life on the surface. 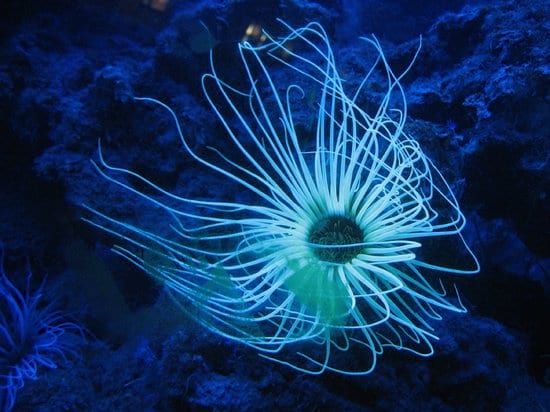 Walk in direction of Cerbère towards large white building (old Aquarium/Laboratoire Arago). Follow the side of building and walk up way-marked steps at rear to pick up footpath behind building. Emerge on D914. Cross at zebra crossing to follow pavement to roundabout, turn right and continue briefly along road to entrance of Côte Thalasso. Cross back to coast side of road to enter footpath behind low wall beside a lôtissement.

Path descends to contour above a creek accessible to the white properties alongside.

In 1870, Abbé François Rous, new Curé at the Chapelle de la Rectorie, took on the task of restoring and extending the small church. Money was tight, but with a firm business head on his shoulders, (and after tasting the local wine and declaring it delicious) he set up a network of Catholic contacts, to make it the communion wine throughout France, marketing it as ‘œuvre du vin de messe‘.

When the railway reached Banyuls, the naturally sweet Banyuls wine was soon being drunk in some of the best restaurants in the land.

As the money rolled in, he was able to donate funds to other needy causes including a young and talented artist called  Aristide Maillol. Later, to express his gratitude, Maillol was to paint the curé’s portrait, hanging today in the Abbé Rous wine cellar.

In  1879, the venture was banned! A victim of his own success, our clever curé was providing too much competition for the local vignerons!

Continue past the building. Footpath descends quickly into a valley and climbs up the other side.

Continue along way marked path, turning uphill away from the sea.

Emerge at top to look across bay towards viewpoint. 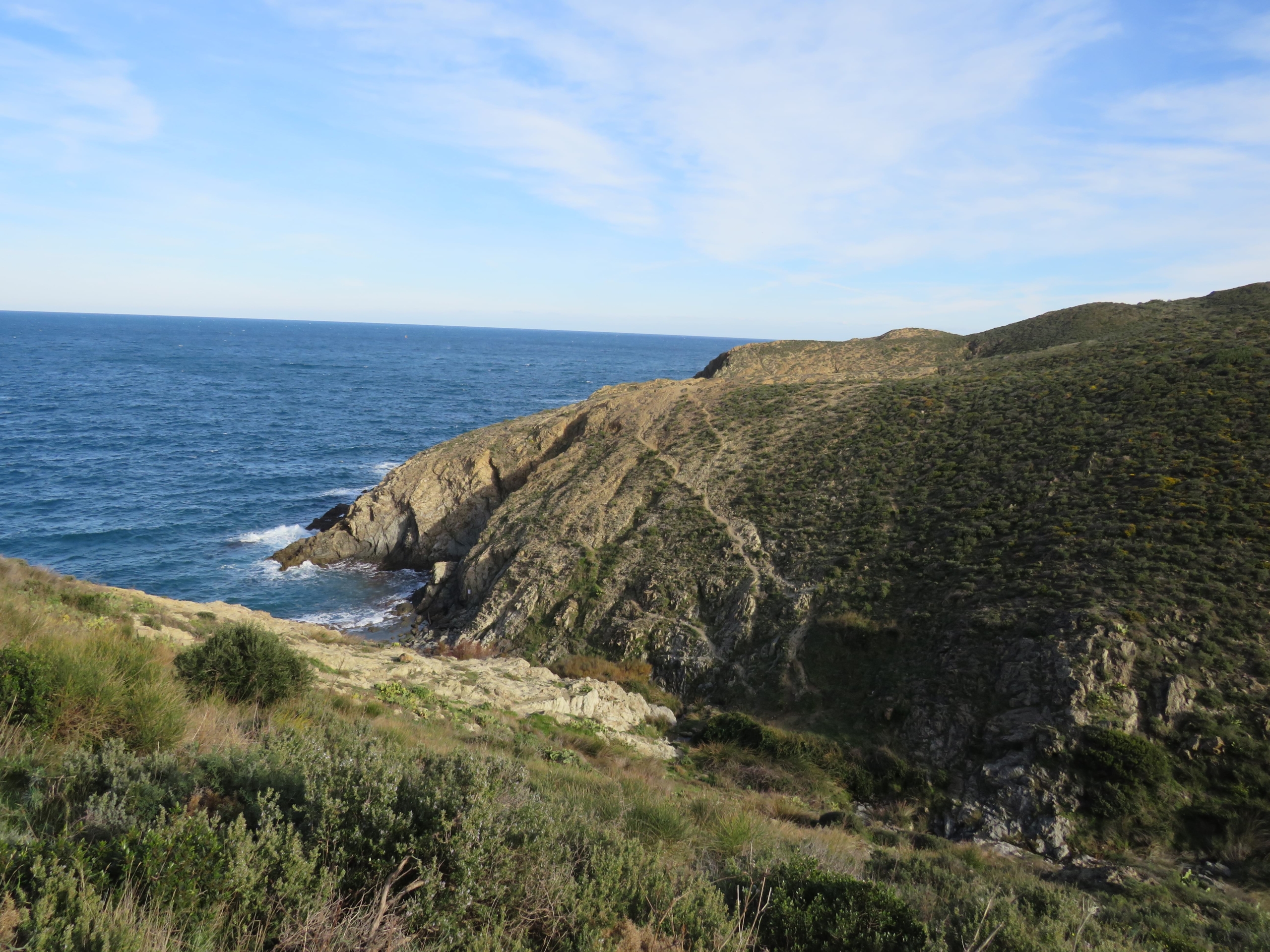 Oops – you now have to descend to sea level and climb up the other side! Follow narrow stoney path down to bay then walk up broad track from beach to quickly find yellow way marking post.

Turn left uphill to reach the car park with viewpoint and table d’orientation beside D914. (1h 30mins from start).

Look across the bay of Peyrefite (site of marine national park/sentier sous marin) to Cerbère in the distance.

Did you know that a swim around the Réserve Naturelle Marine de Cerbère-Banyuls to discover the underwater fauna and flora can be accompanied by a commentary – with a special snorkel that transmits good quality sound by bone conduction – through the teeth!

Bone conduction was actually discovered by Ludwig van Beethoven. He was almost completely deaf but  managed to hear the piano through his jawbone by attaching a rod to his piano and clenching it in his teeth,  bypassing the eardrums and ‘transmitting’ directly to the Cochlea. 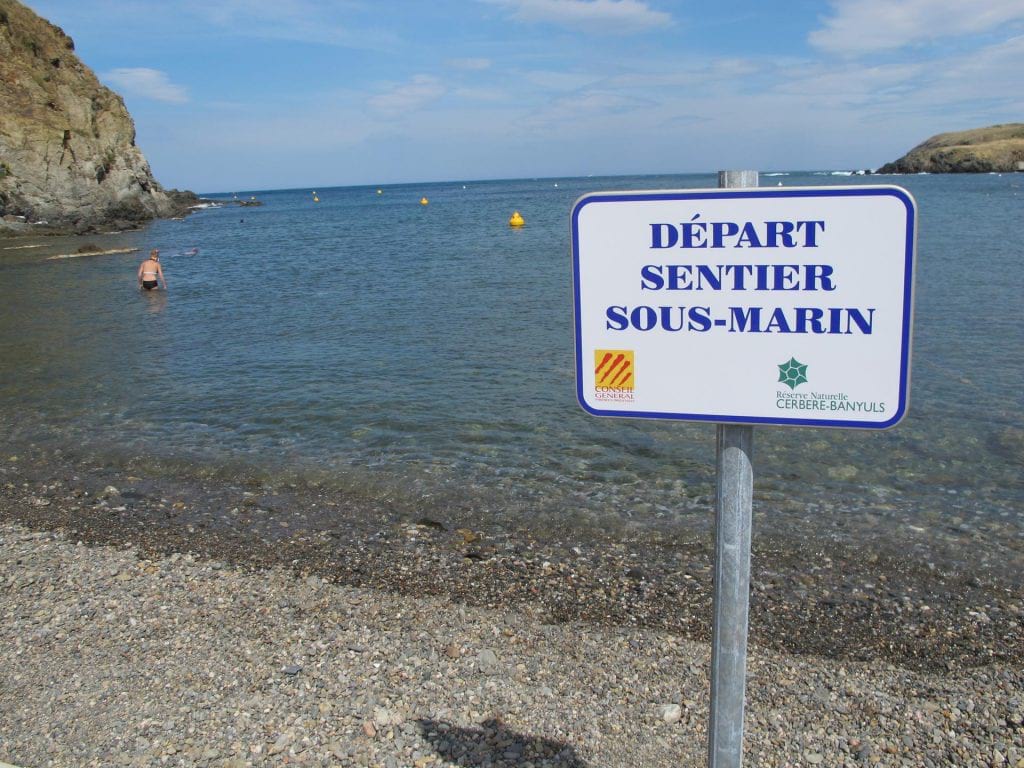 The next section of route has no way marks, except at start, but is on well defined paths. Walk 20 paces down D914 (direction Cerbère) Carefully cross road where white, angled way mark on roadside indicates start of narrow path. This reaches a double track after 20 metres. Follow track uphill to pass below mast, ignoring track to right.

Did you know that the first successful industrial strike by women in France took place in Cérbère?

A difference in width between Spanish and French railway tracks meant that goods had to be unloaded and reloaded onto different wagons when they crossed the border.

As oranges used to be one of the most important imports, women called    “transbordeuses d’oranges”, used to carry out this unloading and reloading, carrying baskets weighing 15 – 20 kilos.

In February 1906, poor pay prompted a strike which continued on and off until December, when a group of militant women who had been refused employment in favour of  more ‘pliant’ workers, lay on the track.

The train carrying ‘scab’ workers stopped just in time, the women received an extra 50 centimes per wagon load, and the militants were offered equal employment rights! 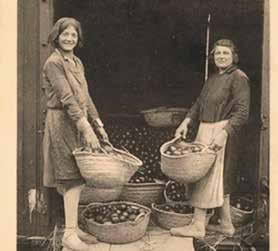 Just after mast, the track ends to continue as a footpath. Continue along ridge and eventually drop down to double track. Turn right to reach crossroads at Coll de Gran Bau. Cross the tarmac road and strike diagonally uphill on narrow footpath rising from corner of track on other side of road. Climb steadily to reach ridge.

High above Banyuls, the little white chapel of Notre Dame de la Salette catches the first rays of the sun as it rises out of the bay. The chapel was built by Bonaventure Reig,  staunch Catholic and owner of Mas Reig, on his return from a pilgrimage to La Salette in Isère where the  Virgin had appeared to two young shepherds, hence its name. 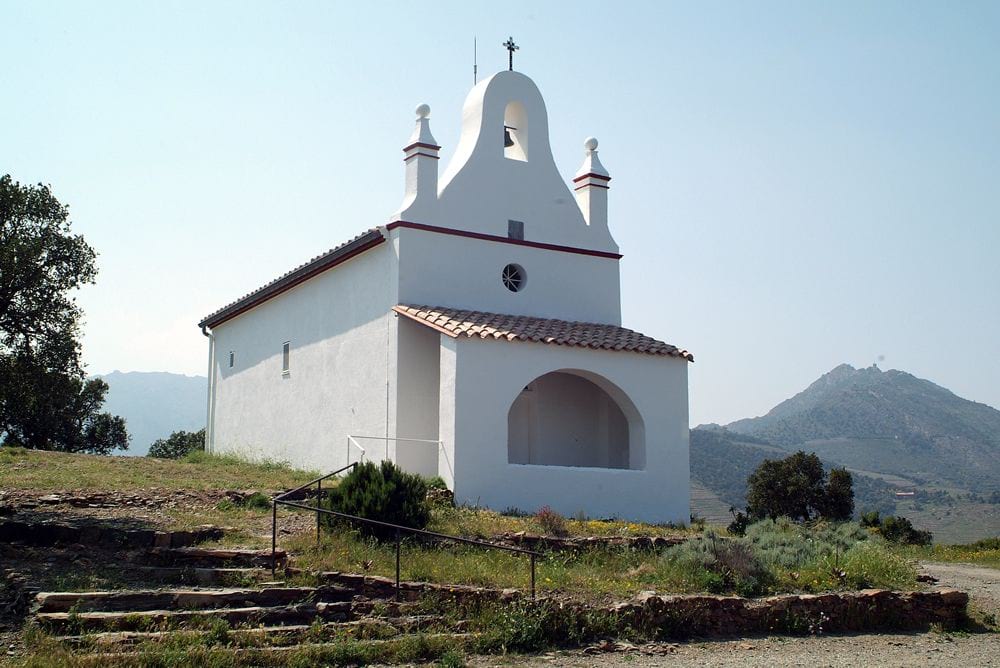 Way marked route leads down into village of Puig del Mas and from there down to the river, across a bridge to turn right and return to Banyuls. 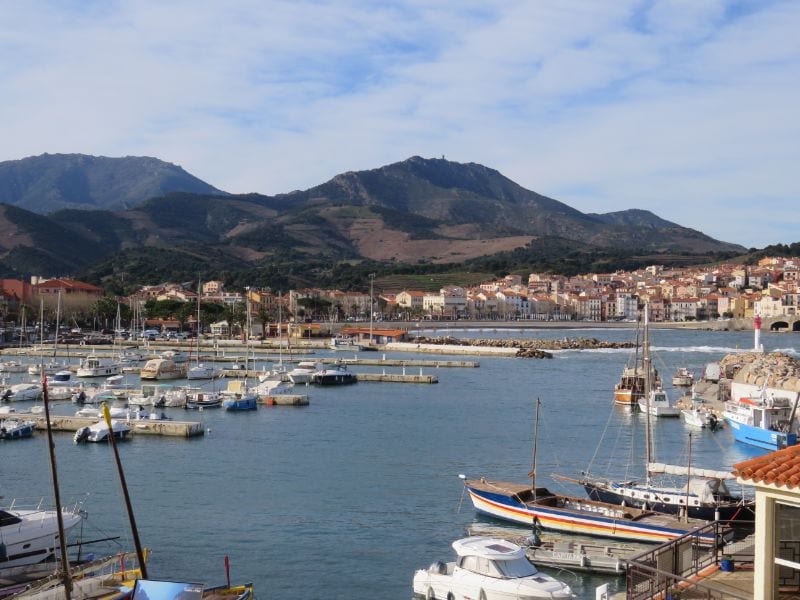 No problem finding refreshments as the town has many restaurants and cafes, and there’s always something open, even out of season. Try La Vieille Cave, particularly if you love pizza and pasta, but with something on the menu for everyone, and sample some of the local speciality wines  in one of the oldest wine producing areas in the world. Markets are held on Thursday and Sunday mornings.