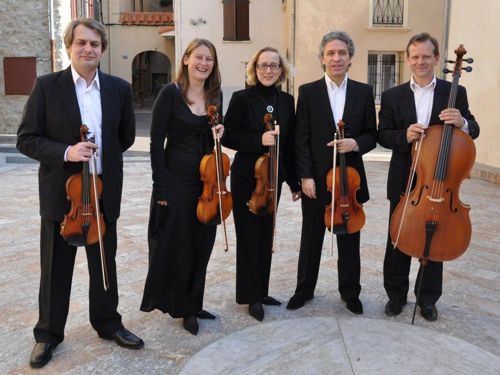 Mare Nostrum Musicae (formed in 1995) is a group of professional musicians under the artistic direction of François Ragot, the celebrated Céret-born cellist.

They are supported by the association FCPC (Formations de Chambre des Pays Catalans) which, based in Céret, was formed in 2007 to ensure that people in the Pyrenees Orientales have the opportunity to hear, for an affordable price, classical music played by world class musicians.

François and Mare Nostrum Musicae also play with a variety of other orchestras and ensembles, both in the PO and elsewhere.

October will see the forth edition of the superb music festival, Automne Musical en Vallespir.

20h30 at Taillet in the church St Valentin:

Trio ‘Syrto’: accordion, clarinet and double base will play music from South America to the Balkans.

Quintet ‘Mare Nostrum Musicae’ with two soloists, F. M. Rignol (piano) and F. Ragot (cello), under the direction of Michel Peus, will play works by Puccini, Servais, Ocón, Falla, Séverac and Turina.
This concert is dedicated to Pablo Casals, and takes place in the presence of Fréderic Lodeon.

17h30 at Vivès in the Salle Communale:

20h30 at Maureillas in the church Saint-Etienne:

20h30 at Céret in the church Saint Pierre:

20h30 at Reynes in the church Sant Vincent:

17h30 at Le Boulou in the church Sainte Marie:

The ‘Orchestre Carrefour des Arts’ with the choir ‘Amuvall 2013’ and soloists from the ‘Glorquestra de Girona’.  Works by Mozart, Massenet, Saint-Saêns and Gounod.

5 pm, in the church of N.D. des Anges in Collioure

5 pm in the Theatre Jean Piat in Canet en Roussillon

12.15pm in the Carré de l’Archipel in Perpignan

5 pm in the church of N.D. des Flots in Canet en Roussillon

A concert with the quintet ‘Mare Nostrum Musicae’ accompanied by the Choeur de Chambre de Perpignan under the direction of Didier Basdevant.   French music from the 19th century (Saint-Saens, Massenet, Fauré, Franck).
Information:  04 68 53 10 00 or 04 68 55 09 92