If you want to taste a big slice of Catalan culture, pop along to this castell demonstration  by castellers Aire Nou from Baho at 16h, central beach in Argelès.

About colles, castells and castellers

Once upon a time, rival bands of young people released their pent up energy by competing against each other in feats of strength and agility. No guns, no knives.

In Valls near Tarragona, southern Catalonia. in the 18th century, the many unemployed   formed  ‘colles’,  groups of human towers, showing off their potential for work, and competing against each other to build the highest and most impressive ‘castell’ (human tower). 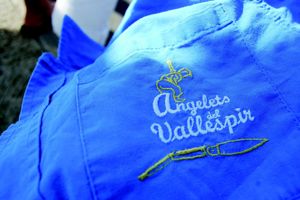 In fact, these  ‘castellers’ (castle-makers) are today a treasured Catalan tradition, kept alive by non-profit associations who are always on the look out for volunteers to climb, or just to support.

One such association is Els Angelets del Vallespir, based in St Jean Pla de Corts. Set up in 2000 by Jep Bonet and his schoolteacher wife, they wear the traditional costume of white trousers, a black sash, and their own distinctive blue shirts, chosen to represent the blue of the sky over Canigou.

The shirts have reinforced shoulders and specially made collars to prevent them slipping down, and to enable them to hold the collar between the teeth if necessary.

At their kind invitation, I climbed half way up a very mini castell, set up just for me! 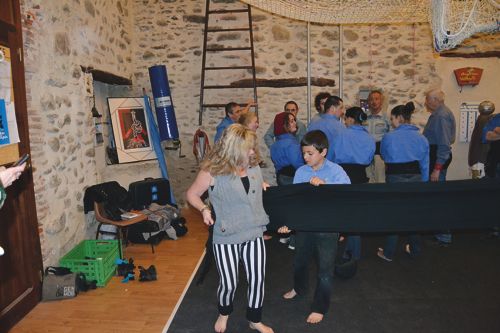 Barefoot to minimize injury, and help balance, I was first taught how to roll myself inside the long black sash, known as a faixa, pulled corset-like around the waist.

This is a particularly important part of the costume as it both supports the back, and acts as a foothold for the climbers.

As I climbed my mini tower, balancing on the shoulders of a sturdy gentleman, a young lady scaled me like a ladder, and I was aware that this is not a sport for the faint-hearted, nor for the coy, as ‘anything goes’ where hand and foot holds are concerned! 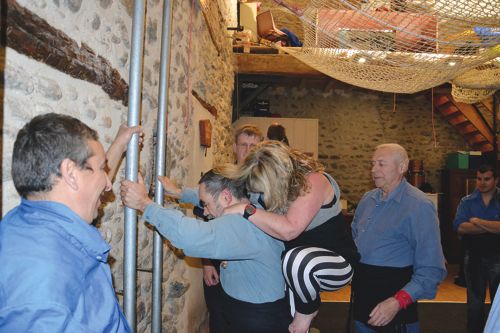 The casual observer may not necessarily be aware of the skill, discipline and organisation that goes into the building up (and taking down) of each castell.

However, stand around the base or ‘pinya’ before the tower begins and you will hear the castellers – usually made up of men in this first tier –  in deep and lengthy discussion,  working out angles and distances in the same way that foundations are planned for  building works. 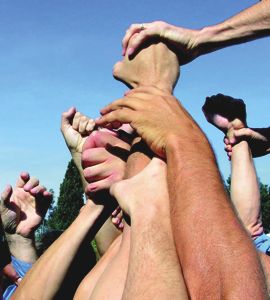 The more the merrier for the formation of the towers. The larger the group forming the pinya, the more efficient the ‘safety net’ in case the tower structure collapses, cushioning the fall of people from the upper levels.

As a building needs firm supports, so a successful castell needs a maximum of people pushing up against the base.

At festivals or exhibitions, other colles may assist in the pinya to help out a small association such as the Les Angelets, who are always looking to recruit.

You may be surprised to hear that climbing to the top of a castell  is statistically less dangerous than playing football!

Once a strong base is formed, the rest of the castellers must shimmy up to the top very quickly,  as the strain on the levels below, and particularly the pinya, can be enormous.

This is no random climb –  each casteller has his or her own position and function within the castell, usually starting with the oldest at the bottom and getting younger with each  level.

The accompanying beat of the tambourine may contain coded messages to the climbers. 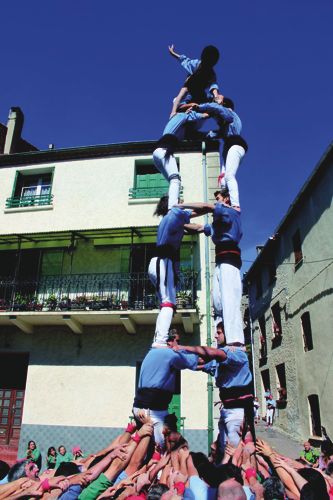 The tower is only  complete once the ‘anxeneta’, often the youngest and lightest child,  climbs into place at the top and raises one hand with four fingers erect, in a gesture said to symbolize the stripes of the Catalan flag.

Children are required to wear helmets.

Les Angelets may lack the numbers that large casteller groups aim for, but they certainly make up for it in enthusiasm, team spirit, and sheer determination.

This is the meeting of sport, and community, a chance to be part of Catalan culture, so why not join them? Everybody is welcome. Contact English-speaking Max on 04 68 87 36 80