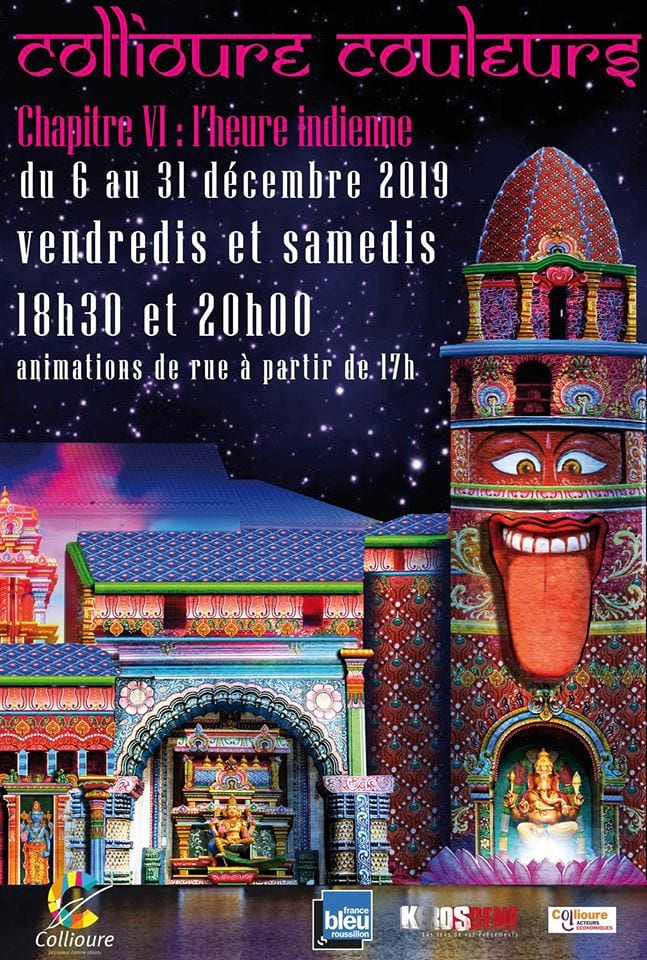 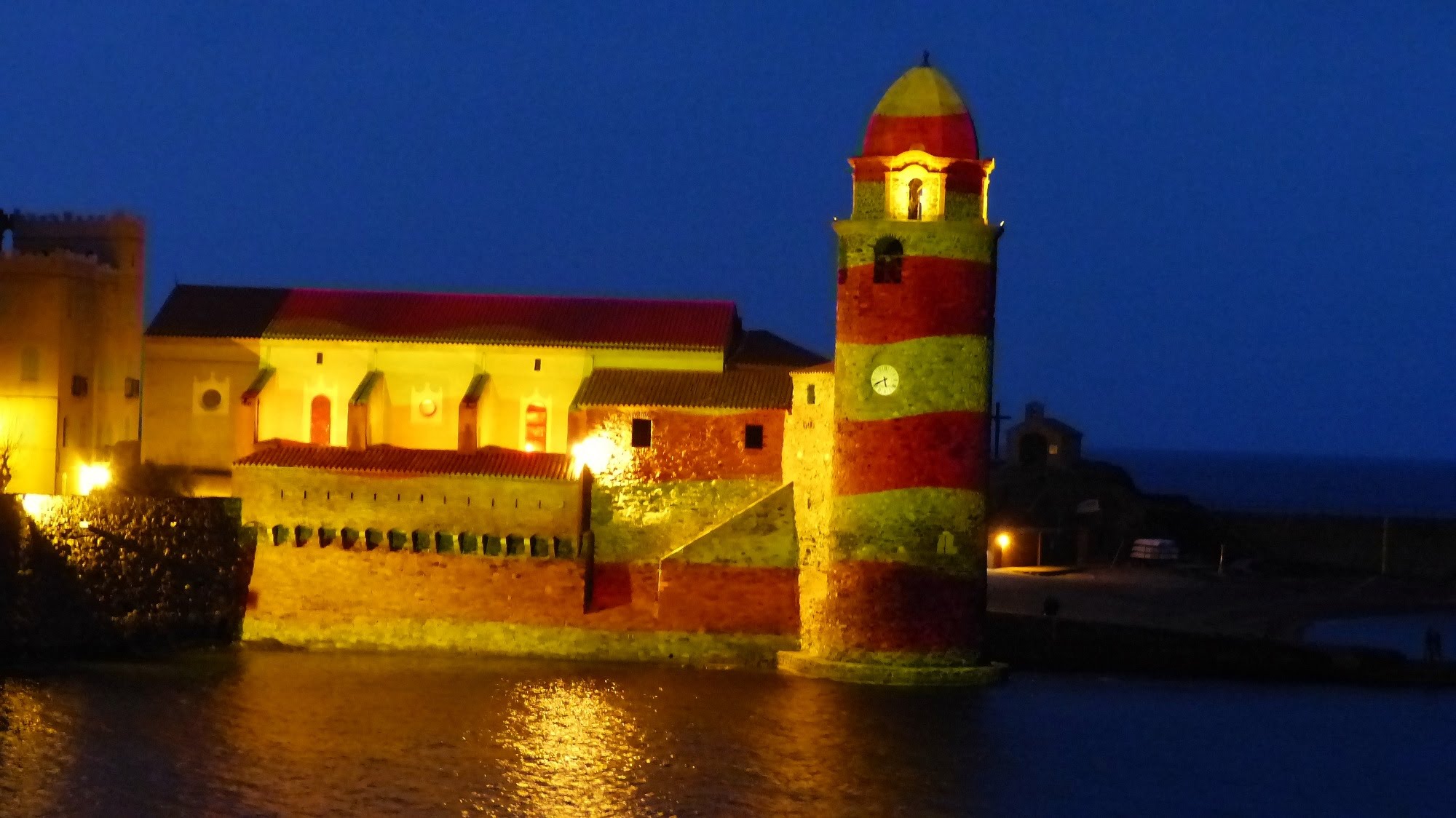 From Saturday 6th to Tuesday 31st, each weekend will see the regional emblem lit up with coloured projections. Desgined by Keroscène, a local production company, the 20 minute light and sound show tips its hat to the site’s rich history whilst combining contemporary references and a healthy dose of fun.

As in the summer, crowds flock from far and wide to watch the show so parking can be issue. With no Cour de Noël at the Chateau Royal this year, the streets are likely to be even more bustling than usual… but that just adds to the festive spirit!

Top tip: best spot for watching is from Boulevard Boramar!

Back in medieval times, Collioure’s reputation revolved around the salting of anchovies, sardines and tuna. Salting is a hard way of making a living and, generation by generation, the anchovy salting families have become fewer and fewer.

In 1870 there were 140 boats and 800 fishermen. Now, in Collioure, only two remain: Ets Roque and Ets Desclaux. You will find their shops almost next door to each other as you come into Collioure on the main road. 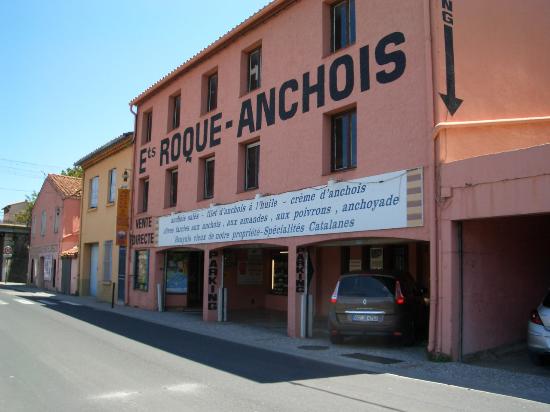 Robert Desclaux still works with his son and daughter in law. He remembers with nostalgia the beach of Collioure full of traditional boats, the women mending the nets, the smell of anchovies heavy on the air. A time when all Colliurenqs of standing had a house, a boat plus five sailor/fishermen and a boy to man it and a vineyard to work in when the Tramontane blew too strongly for fishing. 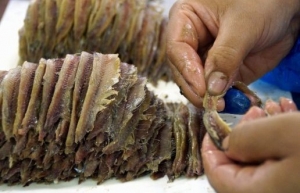 Recent European “norms” have made the work less smelly and possibly more hygienic but not always cost effective.

Certainly the absurd insistence on driving tons of heads and entrails of the tiny fish to distant incinerators seems far more polluting than the old method of tipping them back into the sea.

Both houses are fascinating to visit, it is possible to see the factory where teams of workers, clad in regulation white overalls, hair and hands covered, fillet and salt, clean, pack and label anchovies for distribution all over France, Europe and the US.

The skill and artistry with which the anchovies are arranged in their jars and indeed the entire preceding labour intensive production line should ensure a heightened appreciation of the fiddly little fish when next you meet them in your Salade de Collioure.

On one side, sticking out into the sea, the church: Our Lady of the Angels, Notre Dame des Anges, the church angels waging a constant battle against the rising damp. They seem to be winning. The church stands firm against the waves of winter storms and summer swimmers. 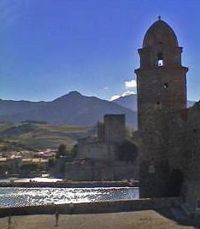 Bold and beautiful, a haven of peace and magnificence, it has become a symbol of Collioure, beloved by every resident, featured on every tourist’s holiday photos.

It was built in 1684, attaching itself to a medieval lighthouse, which became the church clock tower. The famous pink dome was added in 1810.

Take some time to go inside and admire the varied and splendidly carved baroque altars. Put a euro in the timer by the altar and the glow of gold-leaf will draw your attention to one of Sunyer’s masterpieces.

Down each side of the church are four more altars, of particular interest, on the left hand side, one to St Vincent, protector of sailors and patron saint of Collioure. His gruesome end in 303 AD, at the command of the Roman Emperor Diocletian is graphically depicted. Mass is held every Wednesday and Sunday.

Across the bay, its walls also plunging into the sea, is the Summer Palace of the Kings of Mallorca. Imposing and grand, it is the very heart of Collioure. Built on Roman remains that were in turn built on Visigoth remains the site was first mentioned in 673. The castle we know today was built between 1242 and 1280 at the same time as the Palais Royal in Perpignan. 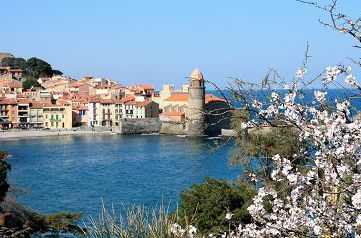 The Spanish occupied it until 1642 when the French took up residence.

Vauban, military architect to Louis XIV made a few alterations involving the razing to the ground a large amount of the existing town and obliging the townsfolk to rebuild where Faubourg is today.

Now, shows and exhibitions are held within its ancient walls, music, dancing and festivals. Floodlights and fireworks light up the castle keep. It can be visited daily, and, inevitably, the views from the ramparts are splendid.

He died at the Casa Quintana on the 22nd of the same month. His tomb has become a place of pilgrimage, decked with flowers, ribbons and remembrance plaques. Set into the headstone is a letterbox. Everyday tributes and poems are slipped in.He has become a symbol of exile, growing in stature each year.

Every February, the Antonio Machado Foundation in Collioure, holds an international literature competition in his memory.

But it is perhaps Henri Matisse who, with Derrain, in 1905, was responsible for immortalising Collioure. Collioure certainly owes a lot of its fame to their paintings.

A reciprocal arrangement as it turned out. Those paintings now hang in famous Art Museums all over the world.

Matisse arrived in Collioure in May 1905 at the age of 36, depressed, full of self doubts and very short of money. As soon as he got off the train he was struck by the vitality of the little Catalan fishing port. His depression lifted. Everywhere he saw colour and light, almost violent in its intensity.

He sent a simple postcard to his friend Andre Derrain. “Venez!” it said. And Derrain came. Later, he was to remark that the colours of Collioure that summer of 1905 had been as “sticks of dynamite”.

The two artists certainly went into battle together. Their easels often side by side, they painted Collioure from every angle.

The colour danced off the walls, sparkled on the sea, hung on the white sails of the Catalan Barques, glistened on the fish scales clinging to the black clothing of the women mending the nets.

The two artists captured it on their canvasses. Blue/green, rose/pink, reds, deep blues, violets, they painted from their very souls. 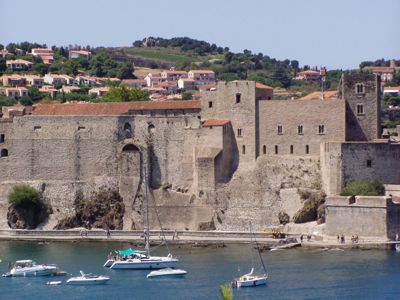 Colours that had never been used to such effect before: Red sand, pink sea; Matisse painted what he felt.

Derrain’s paintings may have been more conventional in that the sand was often yellow but his use of colour was every bit as powerful as Matisses’…and when they showed their Collioure canvasses at the Salon d’Automne in Paris that October, “Fauves!” “Wild beasts!” was the scandalised cry of the leading art critics.

It was not a compliment. But the name stuck, Fauvism was born and Matisse was head Fauve and Collioure was where it had happened.

In 1994 « Le Chemin du Fauvisme » was set up, a guided walk with strategically placed copies of the paintings of Derrain and Matisse in the positions in which they were painted.

The lively and knowledgeable art historian who leads the walk makes Matisse and Derrain come alive. Through her eyes we see the difference between two paintings painted at the same moment from the same balcony above the Tam Tam boutique. We walk through the narrow alleys, up to the top of the town where again they painted side by side, the same view, but different pictures.

We follow their footsteps, understand their emotion, see the Collioure they saw and painted. 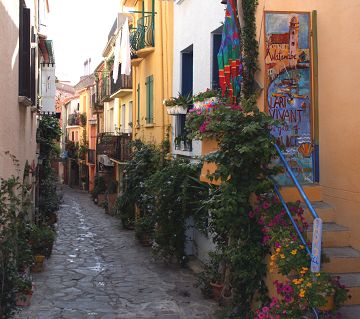 In the old quarter of Collioure, a tangle of narrow alleys, steps, tall, brightly painted houses, tumbling bouganvillea and geraniums, artists studios, small shops are delight to wander round, very different now from the days when fishermen and sailors lived there, the smell of salting anchovies heavy on the air, open drains running down the cobbles, washing slung from house to house. The brilliant colouring of the houses began with the fishermen using up paint left over from decorating their Catalan Barques, boats, in those days, taking priority over houses.

Dotted all around Collioure are picture frames on stands. Steps allow you to look through the frame. Each one gives a differing view of the famous clocher of Collioure. You will see people photographing the framed view or, conversely, the framed face. A pleasant stroll around the town reveals they total twelve.

Street performers and entertainers abound in the summer holiday months. During the day you may be serenaded by gipsy kings or Charles Trenet lookalikes as you eat your seafront seafood.

Mime artists, musicians of very varied skills, jugglers, fire-eaters may obstruct your passage along the Boromar or Faubourg. Silent statues wait, unmoving, scaring and fascinating small children, till a coin in their begging bowl brings them to life.

Collioure evenings are alive with entertainment. Enterprising, often amusing, gentle and not so gentle tones of pan pipes and solo saxophonists fill the air.

French chansons vie with remarkable renditions of old Beatles songs. They all add a carnival dimension to an atmosphere already rife with carnival atmosphere. There are restaurants to suit every taste. Don’t miss the bar in the legendary Hotel des Templiers where the walls are hard to see so close together are the paintings.

There are hotels, there is a Casino, incorporating the largest open air discothèque in France, a traditional carousel, a cinema. Under the plane trees every Wednesday and Sunday a lively market takes place. There are festivals and fireworks galore. The list of clubs and societies at the town hall is long. Collioure may be overcrowded in August but for the rest of the year it is beautiful place in which to spend a day, a weekend, a month, or even the rest of your life