Performed by the Cie Opéra Éclaté 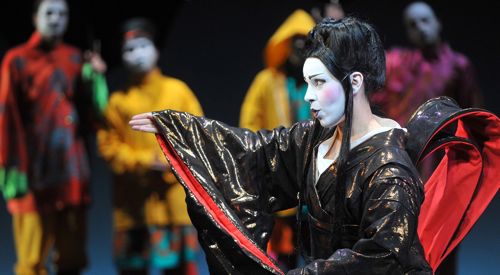 Nagasaki 1900. An officer of the U.S. Navy, Pinkerton, marries a 15 year ikd geisha, known as Madame Butterfly, before returning to his ship. He actually married her for convenience, and has every intention of leaving her once he finds a proper American wife. All for love, she gives up her religion and is rejected by his family. Living in extreme poverty, she waits in hope for his return.  A few years later, Pinkerton returns, with his new American wife …

Puccina described it as the ‘the most sincere and  evocative opera  I have ever written’.   The original opera, in two acts, received bad reviews at its premiere in 1904, at La Scala in Milan.  Puccini changed it into three acts, and the new version was a great success.

Madama Butterfly now ranks at number 7 on the list of most-performed operas in the world.