2005
The now famous Millau viaduct hs been nicknamed the ’Tour Eiffel du Sud’, due to the fact that it was constructed by the Eiffage group, who also built the Eiffel Tower, and has has attracted and continues to attract visitors from all over the world!

In fact, bars, restaurants and businesses in the area have noticed up to 35% increase in trade since the opening and the local vineyards a 50% increase. 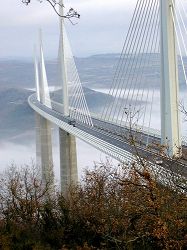 With a toll of 4,90€ in Winter and 6,50€ in Summer, a trip across the bridge is cheap at half the price, with the cost of the A75 motorway to/from Clermont Ferrand thrown in free of charge.

The record traffic recorded for one day so far (statistics up to 2007) was on the 30th July when 50,018 vehicles crossed the viaduct, leading to some jams at the ’péage’. However, this was nothing compared to the bottle necks caused before the construction of the bridge when traffic had to descend into the Tarn River valley and pass along the route nationale RN9, causing heavy congestion particularly in high season.

A cable-stayed road bridge spanning the valley of the River Tarn in southern France and designed by British architect Lord Foster in collaboration with French bridge engineer Michel Virlogeux, the Millau viaduct is the tallest bridge accessible to vehicles in the world.

The highest of the bridge’s seven concrete pillars stands at 1,125 feet, 62 feet higher than the Eiffel Tower and only 132ft shorter than the Empire State Building. At almost 1.5 miles, it is longer than the Champs Elysees and slightly curved to afford drivers a dramatic view of the surrounding countryside and the ancient town of Millau with its medieval bell tower.

It crosses the Tarn valley, linking the causse du Larzac to the causse rouge, and is inside the perimeter of the Grands Causses regional natural park.