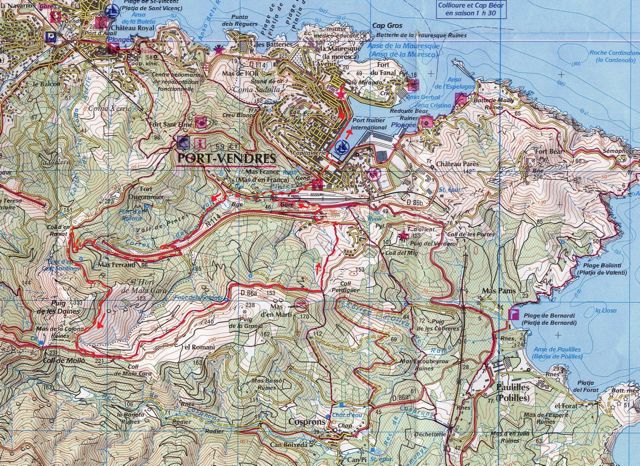 This extraordinary walk at first seems lacking potential until it is actually completed, when a feeling of hope for our environment rises after witnessing the existence of untouched wild life. An alternative name for this walk (which seems nowadays dominated by excessive fast travel of the N114 rushing to its temporary conclusion at the ‘roundabout to nowhere’ above Port Vendres) was coined “The Enchanted Valley” by Charles Rennie Mackintosh and his wife Margaret who considered this valley as their favourite walk in the late 1920s when they lived in Port Vendres.

Start at the Place de l’Obelisque and cross to rue de Pams and then take the first ramp of steps on the right up to the second street turning left on to Rue Louis Blanc to the Place Belieu,  then follow the street Rue Pasteur down the hill and up the other side to the cross roads where you take a left into  Rue Camille Pelletan. This soon opens on to the square where, save for the ubiquitous motor car,  life continues as it did 100 years ago, where petanque dominates  watched by old and young as the chink of metal boules scatter grit and opponents’ balls to the cheers of supporters. 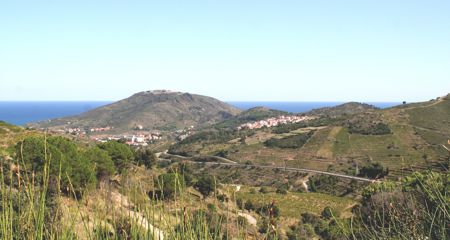 Move away from this parochial French obsession by taking the first road on the right rue, Parquebots, where in 100 metres an ancient relic of a cobbled path leads to the left and up to a sharp bend in the road. Immediately in front,  a survivor of the Belle Epoch majestically stands high above with its architectural ornaments surprisingly intact considering the grim times it must have witnessed during 1944 when all around was blitzed as the retreating German army covered its tracks.

Turning left out of the cobbled path, the narrow road bends and drops down past a hotel trying to make a living on the right and the sleepy railway station which serves commuters at the ends of the day.

Continue straight ahead into the Rue Val de Pintes, where the rural aspects of this walk really begin.

Depending on the time of  year and recent rainfall, a dry ditch is to the right and it is difficult to imagine in times of serious inundation, how and where the flood waters rush to beneath the hotel that sits upon the tunnel.

Follow this road past the recreation park on the left and then where a fork in the road appears, proceed left under the railway and as the land begins to rise a choice of track once more appears. Take the left one.

To the left at this point, a barrage across the ditch at certain times of the year holds a full reservoir of water, but in summer it is a verdant ecological site teaming with life dependant on its boggy terrain.

For the next ¾ km the track steadily rises and the full impact of nature’s realm becomes apparent as every conceivable moth and butterfly species from blue to swallow tail flit freely in abundance. Not only Lepidoptera but grass hoppers, mantis, damsel and dragonflies of all colours dart from side to side of this neglected and tranquil track whose only traffic apart from this insect world seems to be occasional vignerons’ wagons bearing tons of grapes during the vendange. The verges are rich with wild flowers and herbs of all varieties whilst greenfinches and warblers sing in the pine trees to complement this haven of unspoilt Cote Vermeille hinterland.

As the track rises it parallels the main N114 running almost inaudibly on a raised bank some meters above until a hairpin bend in our track tears off to the left and rapidly climbs to immediately beneath the main road. Pass through a corrugated tunnel,  take a sharp right turn on  the other side  and once again walk parallel to the main road, but this time the road gradually rises higher than the speeding traffic.

As this track rises, the climb becomes quite steep and the road quality rather dubious, but follow it until it passes across the mouth of the tunnel of Raixat and where the tarmac is completely replaced by chippings, ravines and stones, take the left track and climb steadily, winding steeply with a cork oak wood on the left.

The map shows this to be a “Road not regularly maintained” which is no over-statement and is certainly not the route one should take the Rolls-Royce for a Sunday outing, but have courage; it does get better – for  a short while before deteriorating again!

As the steep incline levels at the top of the Coll d’en Raixat, walk a few metres to the right, to the road junction and fabulous views can be seen over Collioure and the Plain of Roussillon to the North and back down the Val de Pintes. Close in front to the North East, Fort Dugommier rises high with Fort St Elme beyond whilst the two tours of Massane and Madeloc, crown the ridges high above to the North West and South West respectfully.

Turn back to where the already walked track joins a rocky track and then walk straight along this right fork that follows the contours around the mountain in a slight but easy rise, passing a memorial to a brave young fireman who lost his life at this spot whilst fighting mountain fires in 1976.

Soon after this shrine the track turns to the right and at about 250m from sea level suddenly Tour de Madeloc looms high on the skyline as a menacing reminder of historic need for beacons and look-outs. Beneath the tour sits one of the many garrison posts, whilst further round to the south the vast sienna coloured Batterie de la Galline stands out on a ridge. These fortifications were built predominantly by the genius military engineer Vauban during stressful relationships between the French and Spanish which were further complicated by nationalistic uprisings by Catalans. The whole scene would be an appropriate backcloth setting for a 19th century opera. It is difficult to imagine more beautiful panoramic views than these and as we walked this way during a bright and hot September afternoon, not a car passed us and our most persistent companion was a brightly coloured red-brown kestrel that hovered close-by as if not to miss the opportunity of the potential for a good feed should one of us not make it!

Very shortly the track drops down to the D86a where the route turns left on to tarmac again and gently rises between cork oaks and newly planted olive trees for a short distance, where an alternative way looms.

It is possible to take a foot path that drops to a few metres lower than the road but continues parallel to it, but its track is rough and exposed and at times of strong wind, it is suggested the higher metalled D86a is safer as it winds along the southern edge of the Val de Pintes.

After about 2km, the road reaches a sharp turn to the left at the head of a V shaped valley “Coll de Perdiguer” and at this point the Randonnée is signed off to the right, but our path follows a small and insignificant rough footpath to the left in the sharp bend of the road. Follow this narrow path down, and soon it turns into a charming unspoilt ancient track between vines on the left and garrigue to the right and is edged with numerous species of wild flowers.

At the bottom of the hill, the path takes a sudden turn to the right and joins a modern but quiet road that rises to the new housing development to the right. Take this incline to the first corner where the path takes off to the left and drops down to the busy N114 where a right turn takes the walk to the road junction by Le Cedre Hotel and then a left winds down into Port Vendres along the harbour and back to Place de l’Obelisque.