Walking in the valley is  good. The Gorge is superb. Three miles of deep valley, dug out by the St Jaume River.

It is cool and secret, and because there is only a footpath, where (in 1932) they levelled out a path in the gorge to lay the great iron pipe which carries the water from the source down to the village of Caudies, it feels wild and natural.

It is full of greenery, even in the heat of summer, pine trees, oaks and green oaks (holm oaks), elder, ash and poplar.

There are trees brought down in the winter torrents lying athwart the stream and water-scoured roots trapped in the great boulders along its course.

On our first walk, at Easter time, we found wild asparagus and nipped off the last stems to take home for supper.

Later we found tunnel-web spiders’ nests and looked in fascination at the symmetry of their entrances. The flowers were generous in their appeal, although most of them were white, and gleamed in the shadows of the gorge, elderflowers, ash, and convolvulus.

When we got to the top of the gorge for the first time, we were arrested by the sight of the overflow pipe from the spring, which fed into the little stream coming down from higher up the mountain.

A huge gush of water roared up out of the pipe and down into the stream. When it grew hot and dry later in the summer, for it did not rain from Easter to September, we thought of this inexhaustible flow, for it was still vigorous in July, and we did not fear drought in the heat of summer. 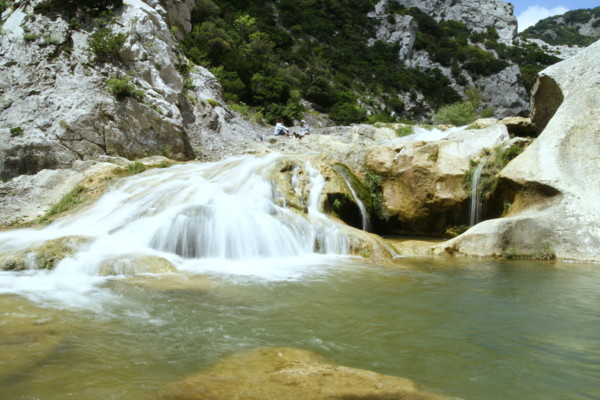 Standing above the gorge and looking down at the stream, we were seduced by the brightness and clarity of the water which has a strange gleam, like a fall of diamonds, and could have spent days there, just gazing.

However, supper called and we continued downstream.

Later in July, we climbed out of the gorge and went up the hill to Fenouillet, where there are two castles.

I suppose there were rival lords, but this is another story. It was hot and we did not look for the limekiln which was signposted or at the actual castles, as we were much more ready for a long cool drink.

We found this at the campsite, as Fenouillet is regrettably lacking in pubs, bars or cafés. Feeling restored we marched down the open road in the sunshine, as the temperature mounted, and passed the lane leading to a third castle, or Castel, and back down to the flat valley floor.

Castles abound around Caudies – there is a fourth castle, or its vestiges, in the village, on the bluff above the Boulzane, and a fifth commanding the Col St Louis, which until recently gave the more practicable route into Aude and the Corbières.

There are many other more imposing castles nearby, but these castles, guarding routes to the north, west and south, which can never have been easy, say more about the debatable nature of this area, which was fought over until 1659, and where the memories of conflict and political change are still lively among the people of the valleys. 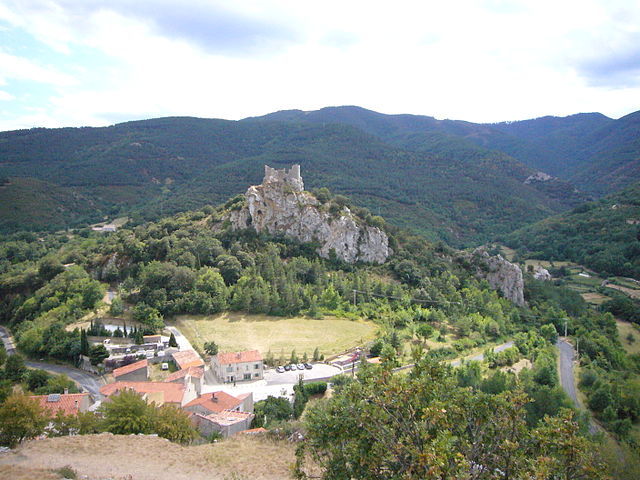 Walking in the valley heightens awareness of the history and activities of the place.

The vines are being harvested now, and in between the rows of vines, heavy with enormous bunches of little dark grapes, tractors bustle up and down, towing picking machines, which look like something out of Star Wars 4  with taciturn drivers on their high perches, which straddle the vines.

Other vines are being picked by hand, and in the evenings, outside the vintners’ homes, you see streams of dark water, where the plastic bins, which replace the old skeps, have been rinsed out.

The best winemakers pride themselves on the care with which they pick the grapes, going back again and again to the rows of vines, to ensure the quality of their product.

The wine here varies, from an excellent red, to whites and even a sparkling wine made by the traditional method. Caudies is at the top of the valley and has vineyards on high cool slopes next to the pine forests, which produce right into late autumn.

It is quite unlike the hot alluvial plain down by the coast, which produces the heavy, sugar-rich grapes which make the Muscat and vin doux.

Yet today, there are too many grapes in Languedoc-Roussillon.

The government is trying to reduce the overall acreage and to encourage diversity. Olive groves are being planted, whose oil tastes quite different from the Spanish product.

Orchards are spreading north from the Tet valley, and recreational uses of the land are being promoted.

However, the land itself is shaped by the wine growing, with the little huts and stables in the middle of the fields, the cypress shelter belts and the hedges of gnarled apple trees, which are twisted and bent by the Tramontane.

As we walk through the vineyards, we see plots where the vines have been destroyed by acid, uprooted and burnt.

The hydraulique agricole – the intricate series of channels which bring water down from where it is stored in the rocks of the surrounding hills, is beginning to look rather neglected and in places the side channels are blocked of and filling in with weeds and carelessly spaded earth.

In some fields, the vines have been replaced by fodder plants, but none of the cash crops grown north of the hills in Aude, such as maize and colza (rape), have appeared in the emptied fields.

There are some sheep grazing outside the village, and some beef cattle not far away, but they take up very little of the land.

However, the walker still sees mainly vines and grapes and can look forward to drinking the product of this year’s crop with some hope. Some vintners have already bottled, but patience is a good thing when dealing with wine.

Of course, we do not touch the vines or their grapes, respecting the work of the growers.

But as we go along there is a feast to be found – there are hazelnuts, walnuts and sweet chestnuts.

In spring, there were wild cherries as well as the asparagus and fresh greens to make a “Salade Campagnarde” – dandelions:

There are apples growing half wild in the field hedges, together with rosehips, blackberries and sloes. Gin beckons. Figs, both white and black, ripen on hedgerow trees and fall to the ground for want of anyone to pick them.

We do not eat acorns, but many animals do and a signposted walk through the woods shows us what the various footprints look like – the slot of the chevreuil (roe deer), the cloven hoof of the sanglier (wild boar), the dainty pads of the écureuil (squirrel) and the larger imprint of the blaireau (badger).

The fox and the pine marten also live in the woods and dead foxes are a frequent sight on the roadsides.

We are in no danger of having the Hunt here as they would not be tolerated amongst the vines but there are plenty of foxes.

The local ACCA’s (shooting groups) have reserved sectors of the woods for their exclusive use and pursue the roe deer, the boar and the hares and rabbits energetically.

Other hunters and their dogs go up into the forests to hunt the truffle as well as to bring back other fungi for the pharmacist to inspect. Game is important here and is treated with respect as an important food source.

Walking along quiet lanes, many of which are part of the DFCI network (Défense Forêts Contre Incendie), takes one away from the heavy traffic of the D117, which borders the foothills of the Pyrenees from Perpignan to Tarbes.

There are some steep scrambles and some rocky outcrops which tell of the glaciations which formed the main valley, and the gorges cut through the limestone tell of the relentless efforts of the water to make its mark on this hot dry landscape.