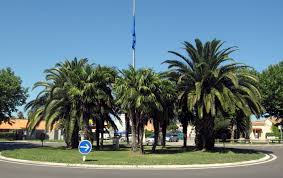 France has 1 roundabout for every 5 inhabitants. The Government’s vision is for every citizen to have one by 2020.

French roundabouts rotate anti-clockwise: so UK and Irish drivers may get dizzy, especially when going round three times while the navigator is working out which exit to take. Note that when asking directions you say ‘un rondpoint‘, your helpful Frenchman will talk about ‘une giratoire‘. Or vice-versa.

Roundabout rules are arcane but essential to know. Here are some of them.

☛ The sign Vous n’avez pas la priorité’  means that the priorité à droite rule does not apply. Mute surrender to new rules is unFrench: you must pay homage to the old rule by entering just in front of vehicles on your left.
☛ Avoid collisions, but be close enough to comment on the moral degeneration of the nation from effete modern rules.
☛ When turning left, go round the outside and cause maximum anxiety to anyone on the inside attempting to leave at the exits you cross.
☛ Do not make eye contact or make gestures while still at a learning stage.
☛ Never use your right indicator to show you are leaving at the next exit. Indeed, the skilled negotiator leaves the left indicator blinking.
☛ Between the hours of 1145 and 1230, anyone going home for lunch assumes priority (including over other drivers going home for lunch).

Practise on little roundabouts before tackling your initiation test, on a big, busy roundabout such as Auchan (now greatly improved by an underground bypass, so fun much reduced). To pass, you must successfully enter and exit from and to each road (ie 12 permutations). The Advanced Test includes use of horn and Gallic gesturing, but that’s for later.
Bonne circulation!