Recommended for experienced and well equipped mountain walkers.The Albères hills lie between Le Perthus, where the A9 crosses the Spanish border, and the Cote Vermeille, finally tumbling into the sea between Collioure and Port Vendres.

♣ To the motorist driving from Le Boulou to Argèles, these hills seem quite small and compact; in fact their appearance is deceptive, and they actually comprise a massif comparable in size to the Carneddau in North Wales, and some 200m higher.These hills are clearly visible from the campsites around Argèles, and many British visitors must have looked upon them with some curiosity. The absence of an English language walking book seems to have deterred many a potential visitor in the past, although an excellent network of way marked tracks is present, including the GR10 long distance path which follows the summit ridge, and leaflets outlining these paths are available from the tourist offices.

♣  On the lower slopes, meticulously tended vineyards, scrub, and oak woodland are much in evidence. Higher up, oak gives way to beech, and the final summit plateau is grassy, boulder strewn, and dotted with dwarf holly trees. A healthy population of sanglier (wild boar) is much in evidence.
In good visibility there are fantastic views down to the beaches of Argèles and Canet to the north, and over into Spain to the south.

In winter, there is sometimes snow on the tops; if snow is visible from the road, it is probably not necessary to carry very much water although a small stove would be useful to melt snow to make tea. If no snow is present, adequate water must be carried, since very little natural water will be found. 2 litres per person should be the minimum or 3 litres in hot weather. If water is found in fonts and streams, it should always be sterilised with tablets since cattle are grazed extensively.

♣  A windproof garment is essential due to the frequent presence of the Tramontane wind.

♣  A head torch should be carried in view of the possibility of finishing the route in the dark.It is important to note that the summit section from Pic de Sailfort to Pic Neulos is very hard to find in poor visibility. There are way marks, since this is part of the GR10 trail, but these may be infrequent and/or obscured by snow. If the cloud is down and visibility is poor this route must only be attempted by persons skilled with map and compass or GPS.

These are for a reasonably fit person, heavily laden with water, taking it at an easy pace in the summer heat, and are actual walking times, to which stops must be added. A super fit fell runner could probably deduct 50% from these times; a walker with a slow pace may add 25% which would mean that the chances of finishing in daylight are slim. In this case it may be preferable to stay the night at the Tagnarède refuge (take a sleeping bag.) 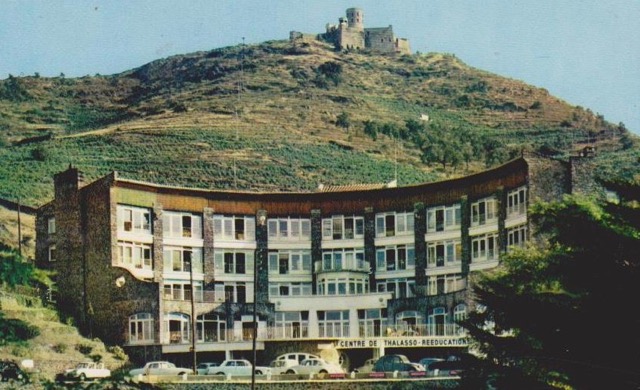 At the parking Pla de l’Oli, this is on the coast road from Collioure to Port Vendres, between the Mer, Air, Soleil rehabilitation centre and the Roches Bleus / Batteries estate.

0.0 Cross the road and go up the Route Impériale for a short distance until a concrete bridge over the ditch on your left (yellow way mark) is seen.

0.04 Cross the bridge and follow the path, steep at first but soon improving to a pleasant track.

0.12 A metalled road is joined at a crucifix, turn right.

0.25 Pass the entrance to the Fort St Elme . This imposing building is illuminated at night, and is a major landmark which seems to float in the night sky above Collioure, but sadly it is in private ownership and it is not possible to visit at present.

0.37 Pass the Fort Dugommier which is being restored.

0.43 At the Coll d’en Raixat (115m) junction bear left, off the metalled road, up a wide stony track. (Various private signs etc on trees on the left but these refer to the track which turns sharp left at this point.)

0.50 The gently ascending track passes a memorial to Luc Sole, a firefighter tragically killed here in the line of duty.

1.0 After a short descent we arrive at the Coll de Mollo (231m) and rejoin a metalled road; turn right.

1.06 Straight on at the junction, signposted “Ermitage de Consolation.”

1.26 We soon branch off right on Randonnée 17, by a shed, behind which is painted on the rock:- Allez Chier Ailleurs – and probably best complied with. This is a beautiful and well engineered path, overshadowed by the Tour Madaloc on our left, which contours gently around to:

02.12 Coll de Vallauria (416m) Turn right and then immediately branch off left, leaving the main track by a narrower rising path, we note for the first time the red and white way markings of the GR10 trail which we have just joined. We follow these markings on to the ridge at 554m, ignoring the right turn for El Rimbau. (This ridge is marked on the map as Serrat de Castell Serradillo.) Some strenuous rocky sections are interspersed with dense tree cover, and we pass a neatly constructed wind shelter which would make an excellent picnic spot, before a final steep section leads us out on to the grassy shoulder of:03.52 Pic de Sailfort 981m. 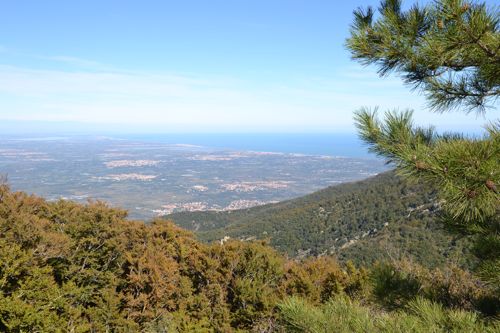 We follow the GR10 initially W than SW, passing the Muntanya Rosa 981m on our left, keeping the tree line on our right and the frontier fence on our left, enjoying the fascinating landscape of boulder strewn moor land dotted with dwarf holly bushes. At the Font de la Macana 968m (perhaps some muddy water) the path enters the woods for a short distance before climbing steeply up to the flat saddle of:05.32 Puig des Quatre Termes 1158m. (From this point a good path leads due N down through the woods to La Parga in about 2h.)

The path gently contours to the:05.45 Col des Emigrants 1130m, the path then swings R (N) to loop into the woods. (When it leaves the woods again, a short detour (5m) R brings us on to a good forestry road which can be followed L down to La Parga in about 1h 45m.)

Follow the way marks NNW down to a corner of the fence at the Col de l’Estaque 1023m then S then WSW down to the Col de l’Orry 974m; then ascend up the ridge to the:07.15 Refuge de Tagnarède 1045m (Club Alpin Francais, unguarded.) A nice place to overnight if we have run out of daylight.

We then proceed up to a water point (will need sterilising) then steeply up to the aerial – bedecked summit of 07.55 Pic Néulos 1256m. From here a number of descents are possible. A good path leads down N to Laroque des Albères. Taxis may be hired here to return to the start. Various good bars and choice of restaurants. (Alternatively, a nice way to end the day is to have previously driven up here on the D71a road and hidden a mountain bike and helmet somewhere. 30 mins or less of exhilarating downhill bring us out near Le Perthus.)