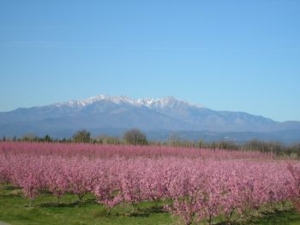 People take their mountains very seriously, a point well illustrated in a Hugh Grant film “The Englishman who went up a Hill and came down a Mountain,” the story of outrage in a mining community when a London bureaucrat attempts to reclassify a much revered Welsh peak. But the villagers finally win him over, the mountain holds on to its dignity and Hugh gets the girl, obviously.

We’re pretty proud of our local landmark too. El Canigó, as it’s officially called, stands a wombat’s whisker under 2800 metres, just over half France’s highest, Mont Blanc though at 100 million years older it can definitely claim superiority on age. 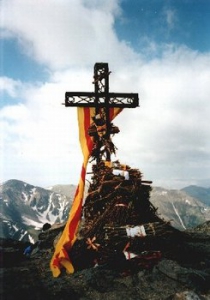 For many who live nearby it’s the centrepiece of a daily communion. Whether capped by snow, framed by china-blue skies or back-lit at sundown, El Canigó is always majestic, always there to give the spirits a lift. Except on days it’s shrouded in mist when you just have to use your imagination.

Legend tells it was first conquered in 1285 by Peter, King of Aragon, seemingly undaunted by the ferocious bears and fire-breathing dragons he allegedly dispatched on route. However, monarchs of the era were notorious for covertly sending ahead their top knight to do the business, then bagsying the credit themselves. Of course overblown accounts of personal daring and courage remain ever popular among autocrats of all nationalities; a certain Russian springs to mind and, oh yes, that fat lad in North Korea.

As for the mountain’s ownership, well, much as we may prefer it otherwise, nature is indifferent to the transient boundaries set by humans. My bet is it’s always given a dismissive shrug to proprietorial claims variously made by the kingdoms of Cerdanya, Aragon, Occitania and countless tribes throughout antiquity. The current title-deed holder shouldn’t hold its breath either, for this perky peak is its own boss and will see off La 5ème Republique in good time, that’s for sure.

And what to call it? Le Canigou, El Canigó, La Muntanya Sagrada? I doubt the mountain’s bothered too much. Personally I like its splendidly noble Iron Age incarnation, Ben Narbonensis. And, bye the bye, what a brilliant moniker that would be for an Israeli Prime Minister.

Nowadays the mountain’s ascent is a routine occurrence with an average time from Vernet les Bains of seven hours depending on the route chosen, level of fitness and of course the number of dragons encountered. There’s an annual race to the summit too, honouring the plucky lads once dispatched by Vernet’s hoteliers to fetch 10 kilo ice-blocks just so the Martinis could be properly chilled. Harsh maybe, but then as now one had to maintain standards.

If you’re thinking of having a go, Vernet’s tourist website provides the route options (there’s a PDF in French and English) and September is the favoured month. The going is mostly moderate but beware the notorious La Cheminée approach which according to a recently-spotted blog “isn’t too difficult, so long as you don’t mind a bit of a scrabble.” That’s all very well, but it must be really difficult keeping the board stable and staying focused on getting that “Q” on a triple while clambering over rocky terrain.
Catalan poet Jacint Verdaguer wrote, “Canigó is an immense Magnolia…..” and then went on forever involving a lot of nymphs and swans. Epic, but tedious. Definitely time for a contemporary take. A wicked limerick? A snappy sonnet? PO Life is offering a bottle of every-expense-spared fizz to the best effort emailed to the editor by 30th August 2015.  And the winner will be published too. That Nobel Prize for Poetry awaits.