At the beginning of the twentieth century, before the introduction of fridges and freezers into the region, inhabitants of Vernet les Bains used to climb high into the mountain, and cut blocks of ice from the hillside which they loaded onto their backs in order to run back down to the village and sell. The fastest runners had the greatest chance of selling their ice. 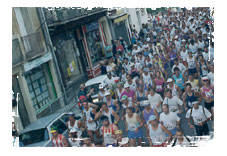 In 1905, a race was proposed by the local branch of the Alpine Club of France to honour the intrepid ice carriers. This race was to be from Vernet to the summit of the Canigou and back, and competitors would have to carry a load on their back.

In 1980, this mountain race was revived, and each year since then, the event has been held on the first Sunday of August. The event is open to both walkers and runners and follows a circular route over a distance of 34km, with 2,100 metres (nearly 7,000 feet) of ascent. Competitors set off from Place de la République in Vernet-les-Bains at 7 a.m, pass close to the Mariailles refuge, head for the summit of the mountain, then descend to Vernet down the north slope of Canigou, past the Cortalets chalet.

Not for the faint-hearted!. To register, or to find out more, check out their website HERE