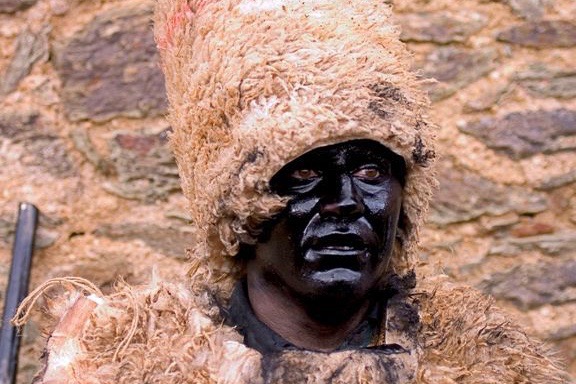 THE ARLES EVENT HAS BEEN CANCELLED, THIS IS STILL IN THE BALANCE

Built on the banks of the river Tech, surrounded by mountains, Prats de Mollo was one of the most important border towns in the area, and today still boasts much evidence of its rich and glorious past; architectural and traditional.

During February, two events traditionally take place at Prats, delighting all who attend, and causing visitors to return year after year: la journée de l’ours (the day of the bear) and ‘Carnaval’.

Blackened from soot, oil and sweat, biting and clawing at everything in its path, superb and majestic, the last of the bears of Costabonne comes down into the town.

Each bears the mark of the bear, the most ancient tradition of the carnival. This is the opening to the Fete de l’Ours et carnaval de Prats de Mollo which used to take place traditionally on the 2nd February, the ‘fete de la Chandeleur’ or Candlemas (the nearest equivalent to Pancake Day) but is now held on the second Sunday of the February half term.

The events, according to the legend, took place near the Col d’Ares, about 13 km from Prats de Mollo, at the foot of mont Falgas, Long ago, a young shepherdess fainted from shock when she stumbled upon a bear whilst tending her flock.

The bear,  actually the devil in disguise, took advantage of her swoon and spirited her away to the caves intending to seduce her and steal her virginity. The young damsel however, prayed to Notre Dame du Coral, nearby chapel overlooking the valley, to preserve her virtue, and the bear was unable to approach her.

Every time he tried, he was repulsed, causing him to howl with frustration, and attracting the attention of woodcutters felling trees in the area. On the ninth day of her captivity, the ‘jour de la Chandeleur, they again heard her cries and, pushing aside the heavy stone blocking the entrance, rescued the young shepherdess and returned her to her parents.

The thwarted bear was furious, his enraged howling resounding throughout the valley.

The hermit of Notre Dame du Coral, along with a local farm boy, followed the howling and spotted the bear at the top of a large tree overlooking a precipice, eating berries. When he descended for the night, they cut the branch so that it was much weakened, and on the bear’s return the next day, he climbed on the branch and fell to his death!

On the second Sunday of the February half term holidays, the young people of Prats meet up at Fort Lagarde, for a boozy meal during which the bears, chosen several weeks before, are prepared for the festival.

Some will play the bears (usually the fittest amongst them!) and others will be the hunters. 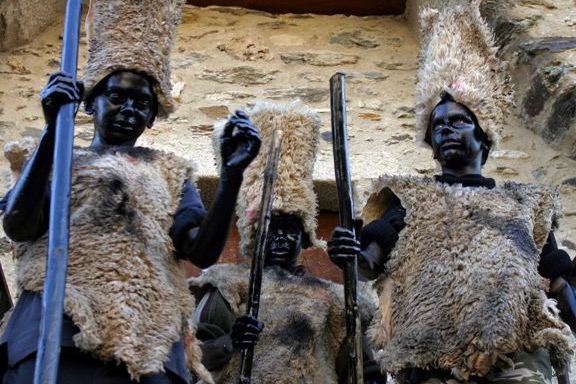 Sheep skins are worn by the ‘bears’ and their faces and hands are blackened with a mixture of suie (soot) and huile (oil). The bears are also provided with a very solid stick. Junior bears will be chosen by senior bears on the day of the Fête (18th February). 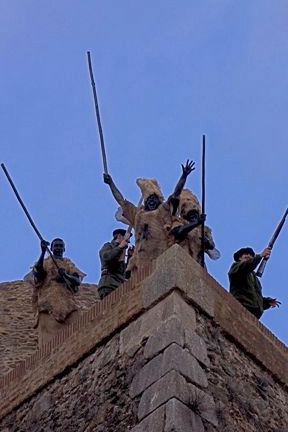 The hunters are provided with shot guns filled with blanks and a gourd of ‘good wine’. Three shots from the redan Ste Marguerite at Fort Lagarde are the signal for the hunt to begin.

The bears run, the hunters follow and the crowd cheer and scream, deafened by gunfire, excited by the smell of gunpowder, drunk on the atmosphere…. Eventually the ‘hommes en blanc’ or ‘barbiers’ intervene. They are covered in flour and dressed in white with lace bonnets! They are armed with heavy chains. One of them also has an axe, another carries a botifarra (locally made black pudding!!) and a cuvette (basin)

After a final, conclusive struggle, the barbiers catch and chain up the bears who are taken to the place du foiral accompanied by music.

The bears are made to sit down on chairs where they are ‘shaved’ by the barbiers, using the axe for a rasor and the black pudding for soap and ‘humanised’

The day of the bear finishes with a Bal de Corre in which bears, hunters and barbers dance around in a frenzied circle until a gun shot rings out and the bears fall to the ground, dead.

Traditional Catalan bands, known as coblas, with specific instruments, will accompany the festival throughout.