How I Met my Husband

In the late 1950’s my immediate family left England to spend 4 years in Malta. 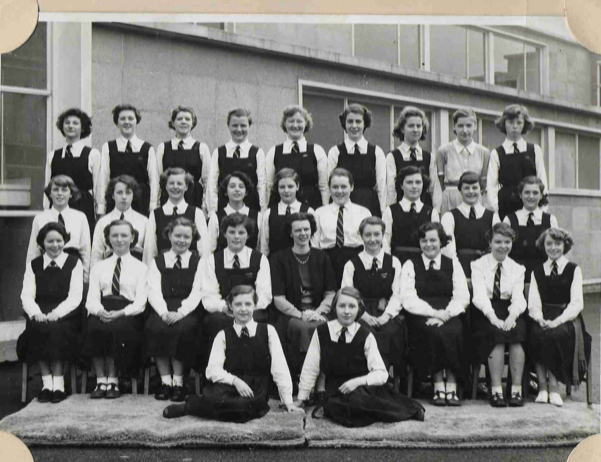 Accordingly I left school in Manchester and continued some of my education at a convent.

Many of the traditional school subjects were dropped by default, for instance biology (Darwin was the devil’s own seed) German, P.E. (girls in shorts!) and others.

The nuns taught us other lessons.

Mixed bathing was shameful. We were warned not to wear immodest clothing otherwise boys would be led to iniquitous thoughts.

Once a girl was engaged to be married she must never go for a walk on the seafront without a chaperone – a mother (or better still, the two mothers), an aunt or, at the very least, a little sister (who could be bought off with a lemon granita.)

At the convent I must have been the only Jewish person the girls had ever seen. No, they didn’t make the Sign of the Horns and cross themselves. On the contrary they prayed for my conversion, rather like Portia who compelled Shylock to convert, not to punish him but to save his own soul. I was very touched by their concern.

There can be no-one more hospitable, friendly, generous and welcoming than the Maltese, and “our gang” consisted of several of the locals, a few Britains from the R.N. and internationals employed at NATO. 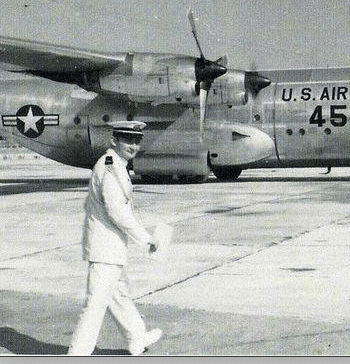 Amongst these friends was a French officer, looking rather attractive in his immaculate white uniform with scrambled egg on his right shoulder

Men in uniform always seem to have the edge over civilians although one day he was arrested by a Maltese policeman on a charge of INDECENCY. Why? Because he was riding a Vespa and his shirt blew open; a rozzer stopped him & schlepped him to the local nick. Robert phoned his Admiral who made such a stink, the poor policeman was advised to curtail his zeal PDQ.

Robert (for, dear reader, it was he) was somewhat popular with young women..

Like many a French Flag Lieutenant in Malta, he had a girlfriend (platonic, so they said) but she, Jane, my good friend, was already engaged to someone else. Her fiancé had recently flown to Canada to arrange their forthcoming wedding and find a house where they would nestle forevermore. In the meantime his betrothed didn’t waste her few months left of spinsterhood.

I was not completely indifferent to Robert’s gallic charm, but I already had a boyfriend. I had noticed a very tall, dark and handsome 17 year old in shul and thought “Hm. Dishy…a bit young, but dishy”. We dated and soon made up a foursome with Robert and Jane. (Robert had a car). Parties, fancy-dress balls, barbecues, swimming in the midnight sea wreathed in starlike phosphosescence. What a fantastic life!

Let me mention the fact that my youthful Lothario’s mother hated my guts. Not only my guts, but everything else about me: my face, my family, my origins (she was Swiss). In spite of this, and unknown to herself, she did me a very good turn: I vowed that if I ever had sons, I would welcome their girlfriends / wives with open arms and love them unconditionally.

One fateful day Jane received a letter from Canada. Someone had blabbed…spilled the beans…blown the gaff.
In a word the letter said “It’s him or me”.

In a quandary and perhaps thinking “a bird in hand….” she fled to Robert and asked him what he thought of this dilemma. Without hesitating he advised her kindly but decisively: “Him rather than me”.

Thinking he could at least have pondered for a moment, she replaced her 11/2 carat ring and with good grace sailed off into the sunset. *

…Which left Robert to my tender care. I had to act fast – he was leaving in 2 months

The first thing was to send my infuriated Rugbein back to school and then to present this French atheist to my parents.
After which I could sing
“A wedding in Paris
I’m going to be married…..”

My future mother-in-law had set her heart on a church wedding with a nuptial procession and the villagers bombarding us with paper flower petals. On the flip side my father would have preferred a synagogue service to please his family. 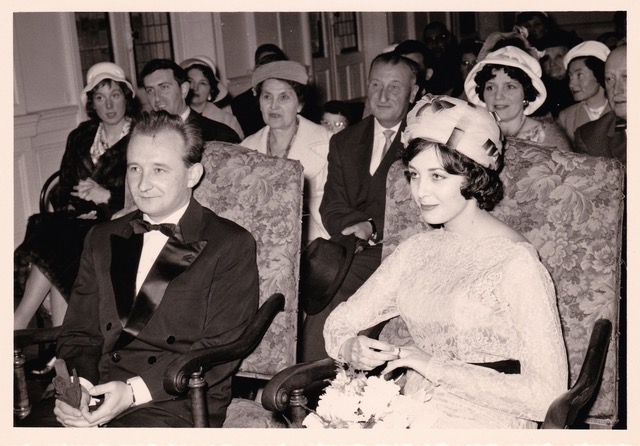 We opted for a civil service in the town hall.

From the photo, it seemed everyone was eventually satified that the other party had not won.

The two clans celebrated the very mixed marriage in the centre of France, a viticultural community where one of France’s oldest wines is produced. Going back to UK as a bridal pair, we made sure the Deuche was dragged down by 40 bottles of Saint-Pourçain-sur-Sioule.

A honeymoon in Paris, thence to England where we came to rest for 6 ecstatic years where Robert had his very first job at England’s most distinguished school
………………………………………………………………………………………………
* About 25 years later, Jane was in Europe & came to spend a few days with us in Perpignan. She was a delightful guest and still my good friend. No hard feelings. True friendship !

Next time: A Beak at Eton