Despite some indifferent play in two of the matches the weekends rugby was captivating and helped to wet the appetite for the remaining fixtures.

Pick of the games was undoubtedly the France England match in Paris.  England performed admirably in a high intensity, high tension affair which they were deservedly winning until a few minutes before no side. The French then scored a brilliant last gasp try through Fickou to win by 26 points to 24. From a neutrals point of view I have to ask two questions. Firstly why was England’s scrum half Danny care substituted when he was having such a fantastic and influential game? Madness! Secondly how on earth was the French  substitute hooker Szarzewski able to create an overlap for Fickou to win it in such dramatic fashion. It was nice to see USAP old boy Nicolas Mas playing for ‘’Les Bleus’’.

Wales, the defending champions were very slow out of the blocks and struggled to beat a competitive Italian outfit. Fair play to the Italians who have some talented young players in USAPs Tommy Allen and man of the match 20 year old Campagnaro. The latter appears to have a great future and scored two tries in his first visit to the Millennium Stadium.  Had Wales not been able to call on the bullocking runs of Jamie Roberts and their ever present captain Alun Wyn Jones they could have started their campaign with an embarrassing defeat. They in fact won by 23 points to 15. USAP stalwart Luke Charteris also played well for Wales. 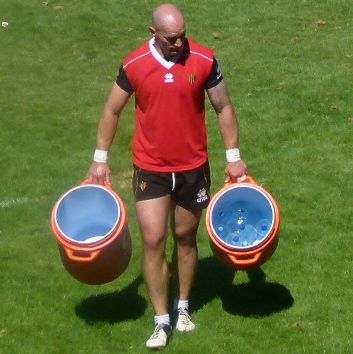 The first half of the Scotland Ireland encounter was equally disappointing. Then after half time Ireland stepped up a significant gear and ended up comfortable winners. Johnny Sexton was particularly impressive. They eventually won by 28 points to 6.  They have a particularly important match against Wales in Dublin next weekend and must now be favourites to win. Having said that it would appear unlikely that a Welsh team boasting 10 first choice British and Irish Lions is unlikely to play as badly again.

USAP player Ali Strokosch was an enthusiastic water carrier for the Scots. He was referred to by a commentator as the ‘’scariest water carrier of all time’’

Next up for England is Scotland in Edinburgh and France take on the young Italians in Paris. France and England must be favourites, but I am sure that the Scots will provide a hostile welcome to the Old Enemy. If France beat Italy they will be cock a hoop for their next match in Cardiff. A party from Sorède will be at that match.

Update on last week’s match. I am informed that Ceret out half Bosquie already has significant Top Quatorze experience with Castres.