A hundred and sixty years ago the first train arrived in Perpignan linking the region’s vines to a thirsty industrial north. As wine flowed north, profits flowed south and the market gardens in the immediate vicinity of the station were replaced by elegant streets, lined with the latest architectural styles. Money was no object as merchants competed to display their success. The best architects of the day were commissioned to design landmark homes.

The quarter has been recognised as possessing some of the finest examples of Art Deco, Art Nouveau and expressive regional architectural styles in France. The very active neighbours‘ association has selected some of the best and created a discovery trail. To follow the trail, download the map with audio guides in French, Catalan, Spanish, German and English available at each stop via QR codes.

Start anywhere on the trail as each site is self-contained. The estimated time to complete the trail is around two hours, allowing plenty of time to walk your chosen circuit. There is ample parking at the station or down along River Basse or you can hop onto the P’tit Bus, free navette, which covers part of the route. 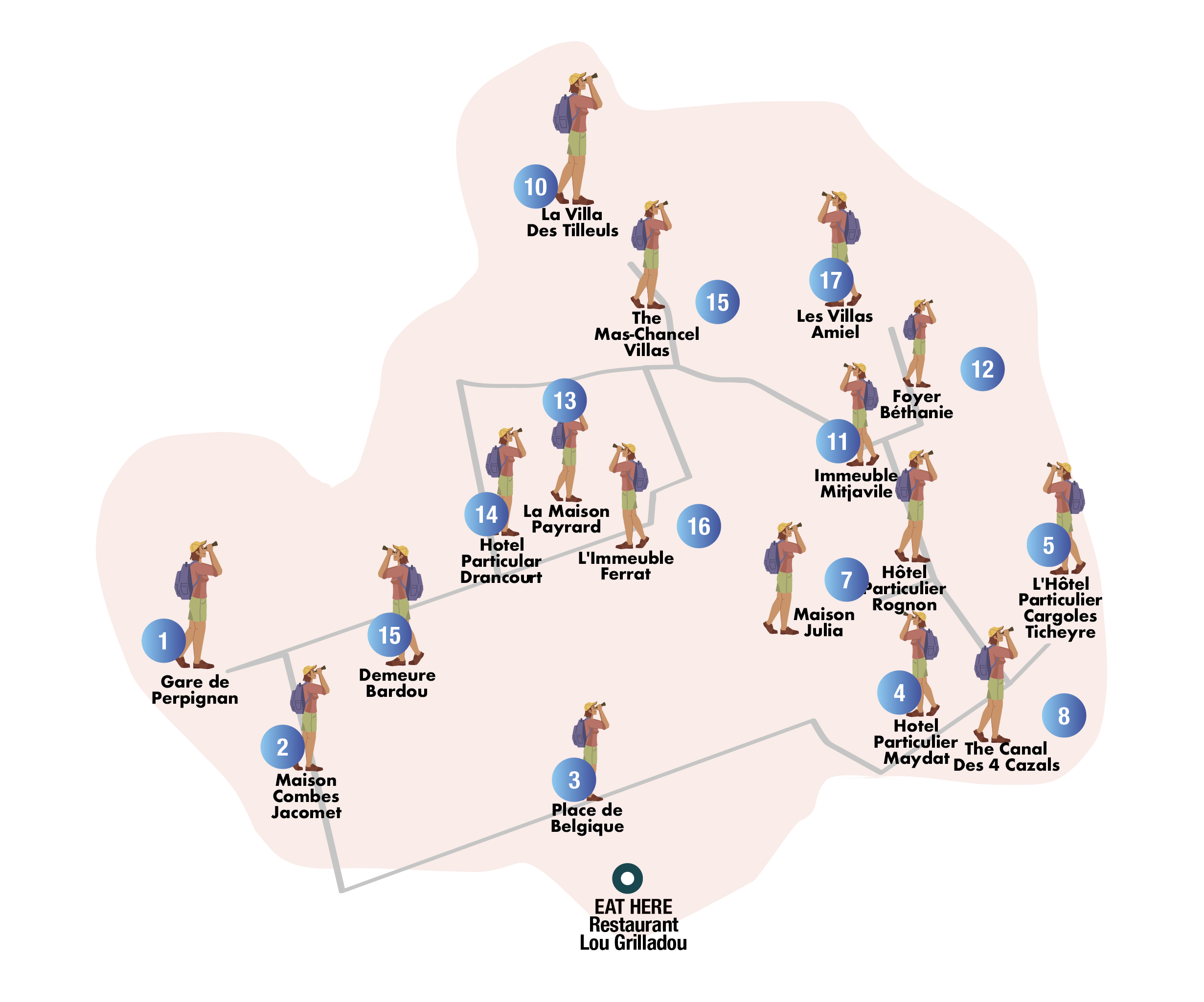 The selection of the station’s site and its construction was not an easy task but nevertheless the first train eventually pulled into the station in 1858. 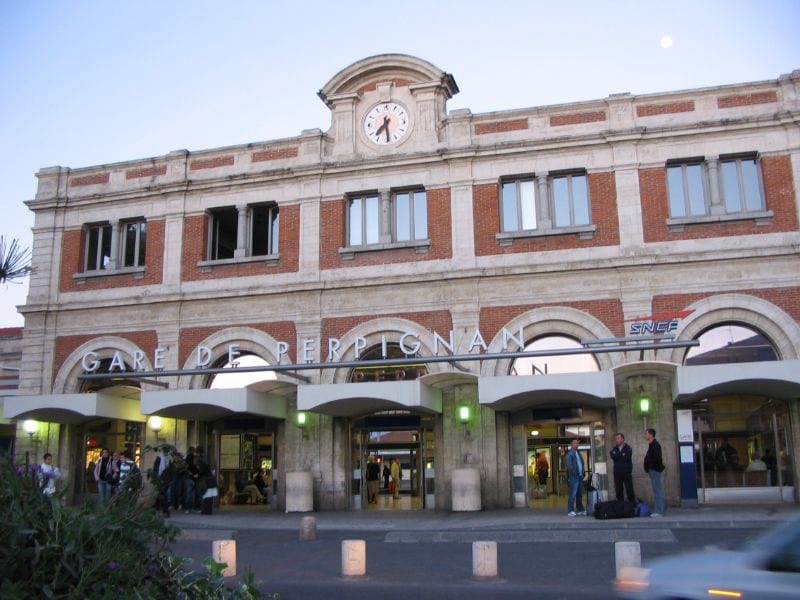 One of the quarter’s most imposing homes. Marie-Alphonsine Combes and her husband Joseph Hippolyte commissioned Danish architect Viggo Dorph Petersen in 1891 to design their home. Petersen designed many other landmark homes in the P-O such as Chateau de Valmy and Chateau d’Aubiry. Borrowing heavily from the very popular Parisian bourgeois style with its slate mansard roof and decorative brickwork, Petersen added local Roussillon touches.

On February 7, 2020, the Maison Combes Jacomet was transferred for a symbolic one euro to the Joseph Sauvy association in exchange for its restoration. 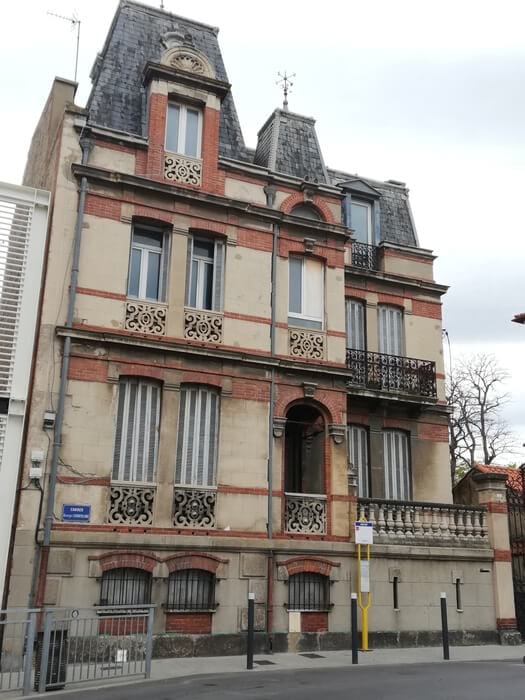 Once known as place de la Gendarmerie, this is the only open public space in the quarter so quickly became a site for entertainment, a vital source of water and weekly markets, roles it still plays to this day. The excellent Lou Grilladou provides a perfect lunch or dinner stop, popular with locals for it fresh and reasonably priced cuisine.

Perpignan has many beautiful old ‘hotels particuliers’, elegant private mansions of the Perpignan Bourgoisie. Check out the Hotel Pams, a 20 minute walk from our station circuit, and now owned by the City of Perpignan, for a free and fascinating visit for lovers of the excesses of Belle Epoque kitsch.

Built in 1940 using local materials, it is a superb example of the way local architects and builders incorporated Art Deco, touches of the Romanesque and Gothic styles. 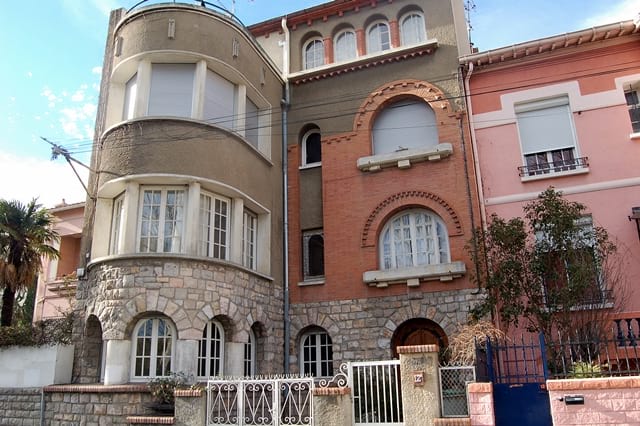 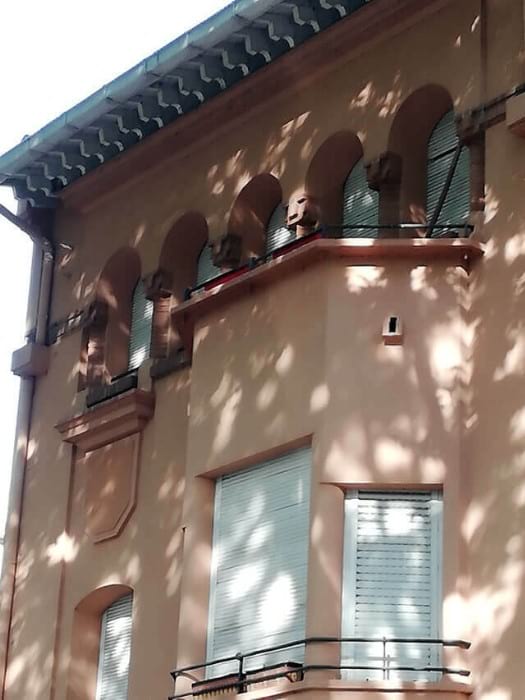 Two superb examples from the 1920-1930’s. Hôtel Particulier Rognon and La Maison Julia sit side by side. Both designed by Louis Trenet, the style has been described as strong Modernism softened by the use of colour and subtle traditional touches.

Linking the Têt and Basse rivers, the canal still flows unnoticed under the quarter. Mentioned in 1538 as powering a mill known as Quatre Cazals (Four Houses) it also provided irrigation for the quarter’s market gardens. As the quarter became more residential it was incorporated into the drainage system. The outlet into the Basse can be quite spectacular during periods of heavy rain.

A row of four beautifully presented homes in one of the quarter’s prettiest streets. Built by Jean Amiel the owner of Foyer Béthanie (see below). The homes were built for his daughters; each carries a daughter’s name, Marie, Lucie, Henriette and Joséphine. The small garden in front of each makes this possibly the prettiest stop of the trail. 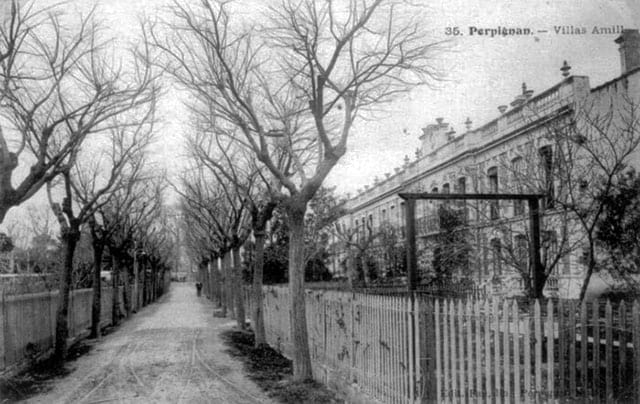 An Italianate style villa with a few local influences designed by Viggo Dorph-Petersen. Now home to the Museum of Coins and Medals Joseph Puig, the villa shows the architect’s precise attention to detail in the way he incorporated the steps, the veranda and an  “English” garden with a stream complete with a small Japanese bridge. Inside, the main stairs have a classic wrought iron banister. The wood-panelled dining room and timber fireplace are a delight. 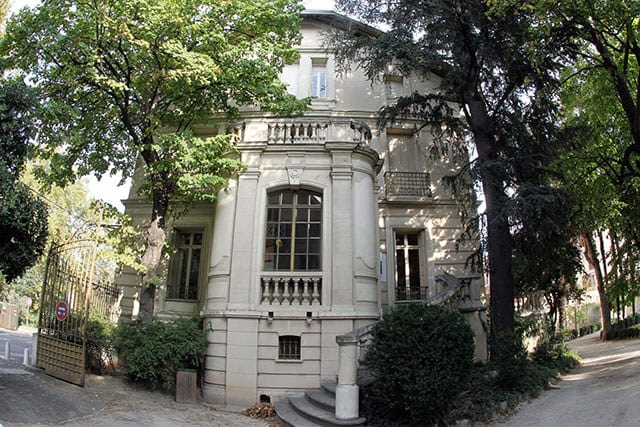 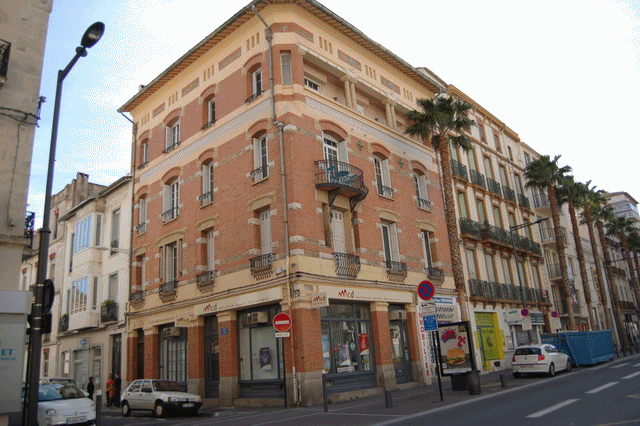 A bourgeois and opulent residence with a distinctive slate mansard roof, Built originally for a very successful carpenter, it is known as Foyer Béthanie as it was a shelter for young girls for many years. 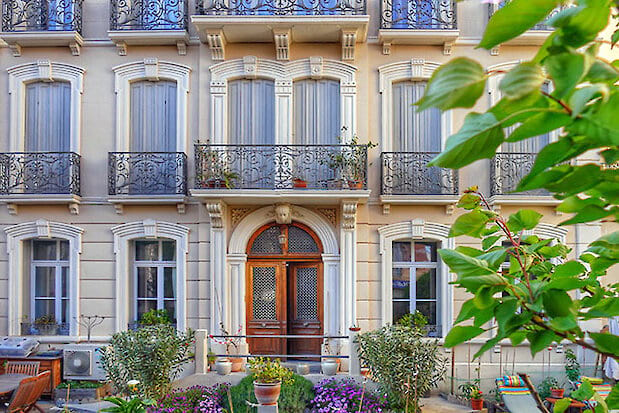 Designed by architect Pierre Sans. A massive and imposing residence in a mix of styles including Spanish, Catalan and Baroque. The style, very typical of the Catalan regionalist movement, uses decorative brick, red stone for pilasters, columns or ornate corbels and wrought iron. 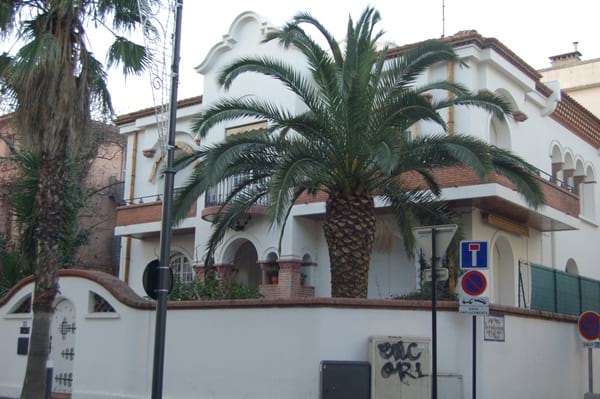 Built for Emile Drancourt a prosperous wine merchant, designed by Viggo Dorph Petersen, engaged to design a mini castle. Over time the property and its adjoining warehouse and grounds were subdivided. Take a moment to examine the fine detail and it’s easy to imagine how it must have presented in its prime.

Built by the brothers León and Eugène Bardou, this imposing structure was at the heart of the Bardou family’s ‘Le Nil’ cigarette paper manufacturing enterprise. Adjoining it were production facilities including a large building which housed the electrical accumulators, early types of batteries which powered the machinery. Elegant and inspiring, it was designed by Toulouse architect Frédéric Delor de Masbou. Sadly its history has a dark side, events which saw the end of the Bardou family dynasty when Léon Bardou shot his 35 year old sister-in-law, Eugène, and turned the gun on himself.

Occupying a prime location on the corner of Avenue Général de Gaulle and Rue Paul Massot. Constructed as commercial premises with two residential apartments. The architectural style was quite common at the time of construction. Examples can be found throughout Perpignan. 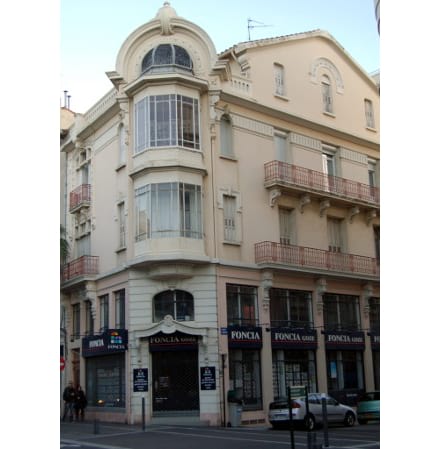 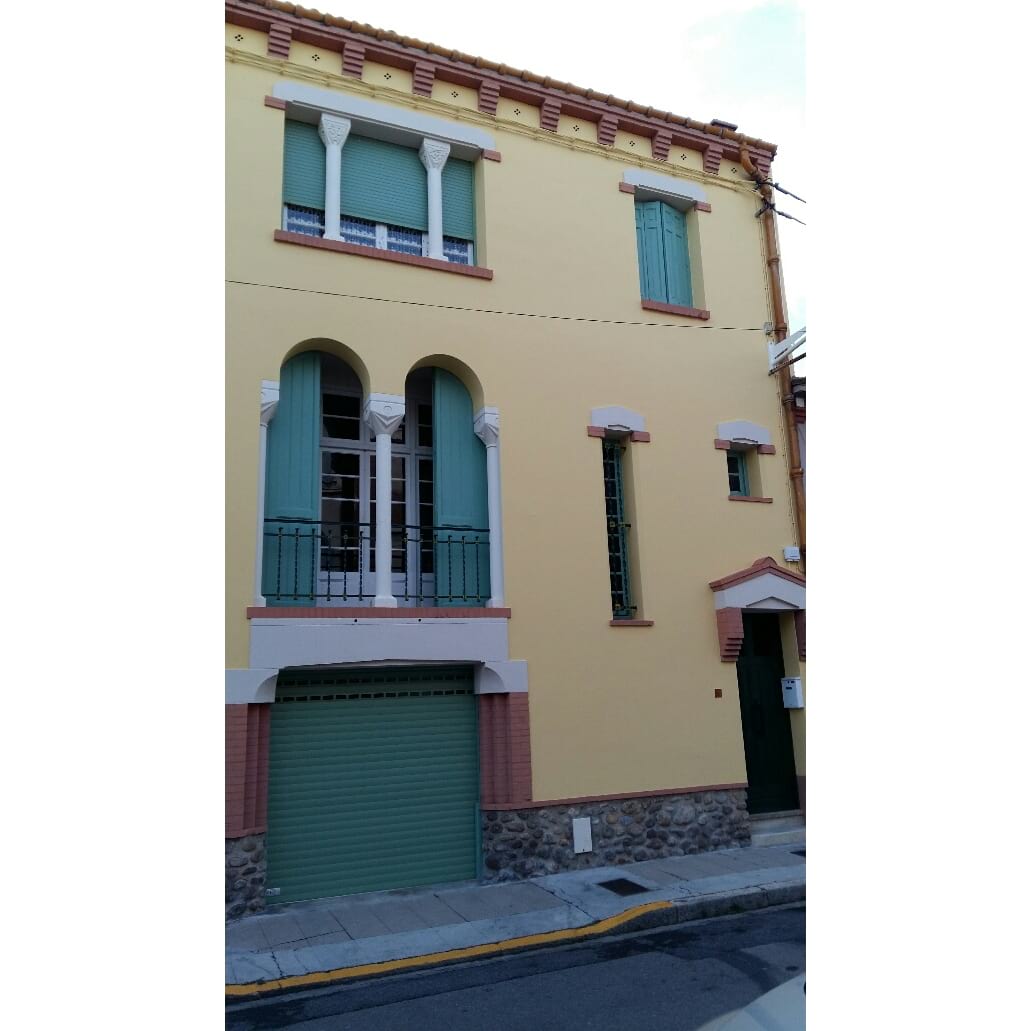 Did you know that Perpignan baker Jean Bardou and his sons invented the first ready-to-roll “hygienic” cigarette papers in France’? Registered as “fancy paper manufacturer” they named their ‘paperettes’ ‘Job’ (Jean’s initials JB, with the lozenge shaped symbol of Perpignan in the middle) and ‘Nil’? (The Orient was all the rage at the time).