Speed restrictions in France – how fast NOT to go! 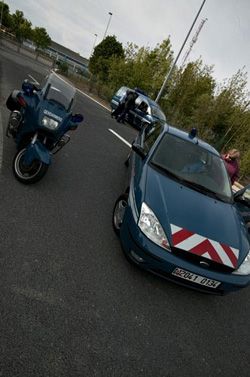 Anyone used to driving throughout Europe on UK plates smugly thinking you’re immune and un-catchable would do well to think again if visiting France this year. I had a trip to Nice planned this spring and had already heard mutterings of French police being much more rigid and vigilant these days, as well as rumours of reciprocal license endorsement deals between our respective police forces. Little did I know we were about to be enlightened….

Travelling south of Paris on the Peage, gin clear skies, lovely sunny afternoon, Mercedes purring away with virtually nothing else on the road. What little traffic there was politely moving aside, the road surface immaculate and inviting, just some of the many things that makes driving on French roads such a pleasure.

Along for the ride and to share the driving, my mate Andy took a turn at the wheel. Him being a racing driver by profession, our progress was brisk, until slowing for what appeared to be congestion. The ‘congestion’ was being caused by a Gendarme on a motorcycle gently slowing people down and gesturing us and three other cars to follow into the services. Bugger. “How much cash you got on you, chap?” 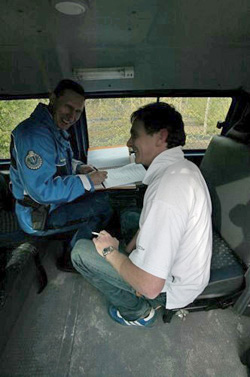 “Just a couple of Euros,” replies Andy. Looks like this one’s down to me then.

The bike Gendarme hops off and goes into a huddle with his colleagues before turning and rattling off “193, 175, 155,167”, pointing to each car in turn. His gun carrying colleagues disperse to the respective drivers…..

“Do you know the speed limit in France, M’seur?” asks Jean Darme.
Andy, desperately trying to wing it, “Pardon M’seur?” with his best Gallic shrug.
“130 kilometers per hour. You were doing 193. You license and car papers?” He continues politely.
Turning to me, “Do you have a license?”

Which I believe proved to be the killer question. Jean glanced at it and handed it back before turning back to Andy, “The penalty is seven five zero Euros”. Andy blinked. “Did he say seventy five Euros?” Jean politely shakes his head “Seven hundred and fifty.” Lots of very authentic Gallic shrugs from myself and Andy, acutely aware that we don’t have that kind of cash on us. Jean gestures to his colleague to explain in more fluent English. “You need to go into this town and visit the bank with your card. You will get your license and papers when you return” 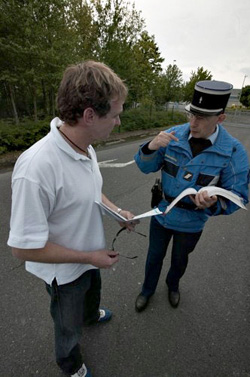 I was well aware of the fact that France has on-the-spot speeding fines, but was unprepared for the amount, or what happened when we returned. Amidst much form filling in and Andy handing over a roll of Euros big enough to choke a donkey, it becomes clear that Andy is not actually going to get his licence back. Nor is he driving any further.

Jean-Claude-Gen-Damme, as we’ve named him by this time, explains to Andy that his license will be returned to him later and that he cannot drive in France any more, gesturing like a baseball umpire, palms down. Instant ban.

While standing around waiting and filling out forms, a German registered Porsche 993 Turbo 4 pulls in. We overhear it’s owner being fined 97 Euro. Hang on a tick, what gives, Jean Claude? We have visions of Andy getting his license returned by post, stapled to a picture of Jean Claude and his mates wearing plastic breasts and having a jolly good time with our Euros. A smile of understanding from the Gendarmes produces a thick red book full of tables and rules “He was at 176, you were 193. More than 50 kilometres over the limit, big fine, instant ban for six months” “In France or UK?” Andy’s got his cool-but-worried racing driver look on, normally only used when summoned before the stewards when racing. “In France, six months. In UK……” Jean Claude’s Gallic shrug is vastly superior to ours.

Their vagueness about what was to become of Andy’s until-now clean license was particularly un-nerving, as with hindsight it was no doubt designed to be.

Chastened, pockets lightened and Andy sans-license, we roll gently out of the services.

This episode answers several questions and raises others. The French Gendarmes, always renowned for their on the spot fines, have clearly been spending the winter devising other methods of frightening non-domestic drivers. Whilst we were stopped, cars of all shapes, sizes and nationalities, including domestic French motorists were being stopped en-masse. It was like watching one of those nature documentaries of grizzly bears catching salmon in the shallows. 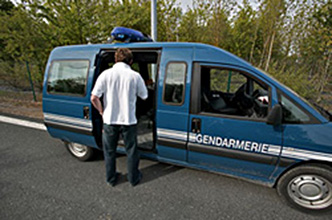 Secondly, if you are going to drive quickly in France, be aware that there is a point at 50 kph over the limit that triggers an instant ban in France and a cash-card-melting fine. No doubt there will be many who say “serves you right” and, indeed, that is so. Andy’s philosophy is one of “live by the sword, die by the sword and don’t cry when you get caught”, so he’s not looking for sympathy. Nor will you get any, as Jean Claude politely relieves you of another donkey-choker….193 kph is around 120 mph. Fast, but far from dangerous in those conditions and for someone with that level of experience behind the wheel.

Thirdly. French roads are wonderful to drive on, rarely congested on the toll routes and the surface is like a mermaid beckoning to a driver used to cameras, white vans and the M25. A driver like Andy just has to taste the forbidden fruit.

Finally, what would have happened if Andy had been alone, or I had been unable to produce a license? Apparently French nationals would have been arrested.

This week, Andy’s license was returned from France with a letter commuting his ban to three months in France. As someone who makes his living from his license, the nagging doubt over the outcome was un-nerving. Next time, he’s taking a 2CV complete with chickens on the roof and faded blue paintwork