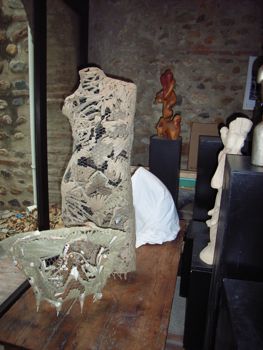 An artist who describes herself as a nomad, Agnes Bogaert has created the perfect oasis in an old stone house in the middle of Rivesaltes.

Her sculpting tools, collected on travels all over the world, hang within easy reach of a central table.

An inner room gives onto a well-lit courtyard where bookcases, plinths and every available surface display objects in marble, stone, wood, plaster and clay, the work of her hands.

Born in Montpellier, Agnes started as a child to model clay she found in a nearby river. A voyage to Greece when she was 16 introduced her to the world of classical forms. At art school in Angers and Perpignan she was inspired by the modern masters of organic form, Henry Moore and Hans Arp.

During a visit to in Indonesia Agnes was struck by the fact that 100 years ago the local ancestral tribes were still cutting off heads. She says she felt those disembodied souls “in the air”. Back in Rivesaltes she started to carve tiny heads with a knife and a bit of wood no heavier than a gram.

“Miniatures de Géants” hover in space fixed on thin metal stalks. They meet you at eye level and express an uncanny collective power. Each miniature sculpture is a masterly merging of multiple faces. Are they the disparate parts of a single personality or a group who share a single thought? 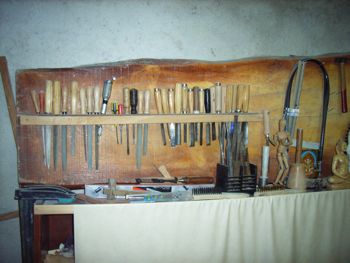 Other questions are raised by Agnes’ interpretation of “Don Quixote”. In her series of fantastical figures, the three-dimensional plaster forms are multiple and shape-changing, like the imagination of Cervantes’ extravagant hero.

Sometimes the material itself suggests its ideal form. Agnes lifts onto her work table a 2000-year-old   block of ebony from South Africa.  She runs her hand over the folds in the wood. “I want to keep the maximum just as it is. I will do a wise man with pleats in his robe.”

The creative buzz of the workshop may well inspire you to try your own hand at sculpture in one of the courses Agnes offers throughout the year. Visits can be made by appointment at: 04.68.64.65.25.