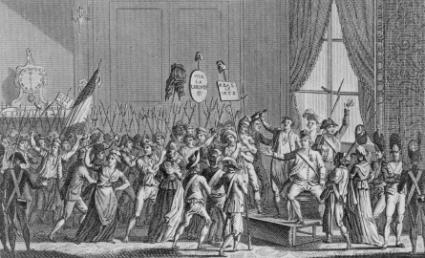 Did you know that “La Marseillaise”, France’s national anthem, was actually composed in Strasbourg in 1792, not in Marseilles as we might assume?

The song was originally entitled ‘Chant de guerre de l’armeé du Rhin’ (War Song of the Army of the Rhine), and written as a response to the invasion of France by Prussian and Austrian forces,  later defeated at the Battle of Valmy.

Sung in Marseille at a patriotic banquet where printed copies were handed out, the song spread through the city and when French revolutionaries from Marseilles entered Paris, they marched to the Tuilleries singing the anthem to be. From then on it was known as La Marseillaise

Ironically, this patriotic and passionate song  adopted by  the Revolution was written in one night by staunch royalist Rouget de Lisle!

After being banned several times because of it’s revolutionary associations,  La Marseillaise was finally reinstated in 1879, and has been the official French National Anthem ever since.

And here it is in full for those who wish to learn it off by heart! 🙂