A difference in width between Spanish and French railway tracks has been put down in the past to a deliberate move on the part of the Spanish to prevent French armies invading Spain by train. 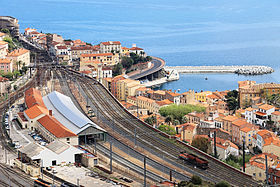 The technical reason was in fact to allow more powerful engines to function in mountainous country.

Of course, this difference in track width meant that goods had to be unloaded and reloaded onto different wagons when they crossed the border.

As oranges used to be one of the most important imports, women called    “transbordeuses d’oranges”, used to carry out this unloading and reloading, carrying baskets weighing 15 – 20 kilos.

In February 1906, poor pay prompted a strike which continued on and off until December.

A group of militant women who had been refused employment in favour of  more ‘pliant’ workers, lay on the track.

The train carrying “scab” workers stopped just in time, the women received an extra 50 centimes per wagon load, and the militants were offered equal employment rights! This was the first successful industrial strike by women in France.

Today, the new TGVs  use standard European gauge.but as some older goods trains pass through Cerbère, they still have to be adjusted each time they pass from country to country.