Summer storms have never been my favorite kind of weather but this year they seem to have outdone themselves with some quite magnificent lightning and thunder that almost driven us to buy ear defenders.

Most afternoons have brought rumbles and bangs that have sent Lily [the dog] running for cover. Only yesterday saw her cowering behind Mike on the settee with her eyes rolling and her ears flat.  Now you could understand it if she was small and cute and slightly fragile looking, but as some of you know she is a 58 kilo Pyrenean Mountain dog and doesn’t look as though anything would shake her. It does make me wonder how the working dogs manage out on the mountains. Maybe they hide under the sheep until the storms pass over.
This is the time I wish I was a cartoonist….I can visualize very well, but can’t put pen to paper. 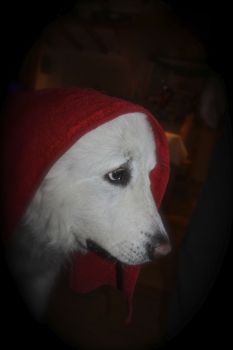 Gardening up here has always been a bit of a nightmare. Even when I have bought shrubs and plants that boldly announce that they will survive at temperatures down to -20, and then promptly die in the first frost. However I have found by much trial and much error that buddleias, lavender, gooseberries and clematis survive. Marigold seeds and some beans seeds also seem to germinate and grow but other seed just fail miserably and never even show their heads. There is one problem that has got me puzzled. I have grown two clematis and am about to plant a third and they tend to grow so high and then turn into shrubs instead of climb. Very weird. I have also grown sweet peas this year and instead of climbing, they have crawled across the ground without gaining any height . Could it be the altitude I wonder? Is 1650 metres just too high for a sweet pea? I once tried growing melons at 1000metres in Escouloubre  and was laughed at by the villagers who said I was wasting my time. Of course true to form I was sure I could and ended up with things the same size and texture of a cricket ball. I am always [now] opens to polite suggestions.

On a different subject totally. Hospital food. I know it has been in the headlines recently and I can understand perfectly why people are complaining about the miserable offerings they are given on a daily basis. I can, with hand on heart say that French hospital meals are no better than English. They tend to be beige, bland and boring and at times look as though someone else has chewed them for you. I recently had a stay in the clinic in Prades and the food there was much more colorful but just as awful. Why is it that hospital chefs appear to lose their skills and cook by the bucket load. More than once I have offered a babies tiny dessert for my dessert. Whatever happened to French Cuisine? The care however has been second to none and definitely no complaints there.

On my return from hospital I found that sitting outside in the sunshine made me feel so much better, and so with the assistance of my grandson I hobbled to the deck and my garden chair. Only to find that my elderly neighbor was watching my every move with his binoculars. I have always tried to understand his little problem of “spying” and have tried for years to ignore it. But it really got my goat this time and waved him away with my hand. He jumped behind the window frame but was out again a couple of minutes later watching my every move. I just wish I knew the details of Privacy Laws in France. At first we just laughed it off but now it is annoying as him and his wife bob up and down at the window to see what we are doing. I may take up naturism, that would shock him , but probably do untold damage to his retinas.

Just read this back to myself and “mumble” is definitely what this is. Or maybe it should be a “grumble”
Never the less Autumn is a lovely time of year and I mean to thoroughly enjoy every moment of it. Enjoy the beauty of the trees turning into the golds, reds and scarlets that set the forests into blazes of flaming magic. Breathtaking and worth a drive up the mountain.
So until next time
Take care