You could easily miss it. Walking along Perpignan‘s Avenue Charles de Gaulle towards the station it’s half way down, on the right but so hidden by dense foliage the lower floors are barely visible. If you do take the trouble to peer through the tangled mass of bushes, it’s clear that L’Hotel Drancourt’s glory days are long over. 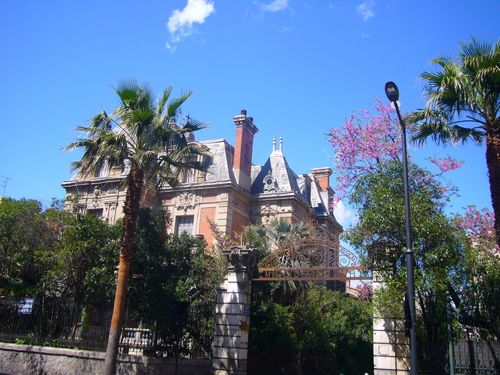 Built around 1850 to the design of celebrated Danish architect Viggo Dorph Peterson (he of Château Valmy at Argelès and Château d’Aubiry near Céret) in his signature mélange of Parisian Baroque, Bavarian Gothic and a touch of Wuthering Heights.

Commissioned originally by the Perpignan wine merchant Emile Drancourt, this grand house served as both a family home as well as headquarters for his wine business.

Although the property now stands on a relatively small plot, an early photo quite clearly shows a large adjacent courtyard dedicated to barrel storage, stables and delivery carts.

This has all given way to housing but the impressive archway leading to this area (still bearing the merchant’s name) remains today. 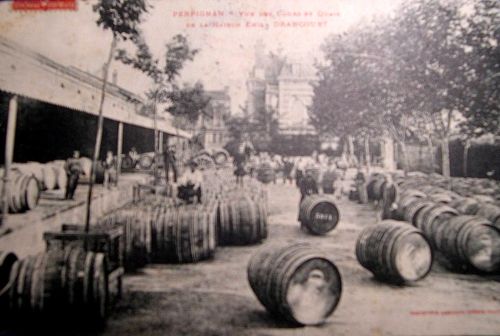 In its heyday carriages would have been coming and going with Perpignan’s elite calling to both socialise and do business, as well as attending gala functions (Drancourt was a great fund-raising philanthropist, in aid of Perpignan’s poor and dispossessed) that regularly took place in the elegant, ground floor drawing rooms.

But that was a long time ago. The property since has passed through a number of owners and different usages but has been completely empty for five or so years now.

It’s actually not in bad shape (aside from the roof which is a priority repair job) but cracks in the façade are beginning to reveal themselves and a general air of neglect prevails. 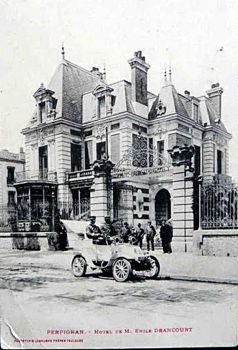 A lot of money for sure, but a relative bargain given the vast 550 sq meters of accommodation spread across more rooms than you can shake a baton at.

And it’s located just a stone’s throw from the new TGV terminal at Perpignan station where a dozen major European cities are less than 4 hours away.

But there’s very little garden, limited parking and a new owner is going to need a centime or two more for the full renovation that’s necessary. So, what of its future?

It seems that at least one commercial proposal to turn the house in to apartments has been declined by the planning authorities, though it’s not clear why.

It might appeal to a large extended family, or a professional practice. If the community could be involved it would make a great music school or an art gallery.

Or how about (given the building’s historical connections) a retour aux racines with a heritage centre dedicated to this region’s great wines? In May 2013, following a public meeting, the Conseil General indicated they might consider plans to acquire the building. But it’s all gone quiet since then.

It would be a great pity if this prime example of Perpignan’s architectural legacy were allowed to slip further into decline. Anyone know of a social network billionaire looking for a project?