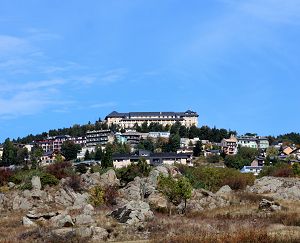 From Perpignan, follow the RN116 via Prades, Villefranche de Conflent to Mont Louis, then the D618 Font Romeu. Note that the road between Villefranche de Conflent and Mont Louis is a mountain road with many hairpin bends. If you are unfamiliar with driving in France, expect some hairy driving to be going on. In particular you are liable to be overtaken on sharp left hand bends so don’t cut across the corner unless sure there is no one behind you.

Approaching Font Romeu, you have the choice of turning right as signposted at a roundabout and going directly to the skiing area at Les Airelles or of continuing straight on into the town itself. If you go right, you reach a large open carpark at the foot of the slopes. In this area you will find a ticket office, the offices of the Ecole du Ski Française (ESF) and the Ecole de Ski Internationale, a large cafeteria on two floors and a salle de picnique where you can eat packed lunches and also get hot drinks, sandwiches, croissants and beer. Be aware, however, that there is no ski rental in this area so if you need to hire equipment, either do so at one of the shops en route or continue into Font Romeu instead of turning right. 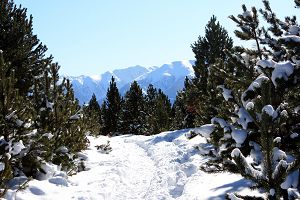 If you go on towards Font Romeu itself, there is a rental shop and bar on the right before you get into the town. After that, look out for the tourist information office on your right and a carpark sign on the left. There is covered parking here for 240 cars. On either side of the car park there are ski rental shops.

The ticket office for your lift pass is at the tourist office where there is also an ATM. Immediately behind the office is a gondoal station to take you up to Les Airelles at the foot of the slopes . All of this is within a hundred metres or so.

Originally nothing but a small cluster of chalets, Font Romeu flourished as a result of the arrival of the Petit Train Jaune in 1908, followed in 1911 by the building of the fashionable and luxurious Grand hotel, frequented by royalty and the rich and famous from all over the world during the 1920s and 30s.
The Grand Hotel still dominates the town but is now split into apartments.

Font Romeu remains a highly successful ski station, twinned with Pyrenees 2000 to offer 60 downhill pistes and 100 km of cross country was well as paragliding, boarding, snow shoe walking, husky sledge riding and quad vtts. In 1968 it was the site chosen to train French athletes for the Mexico Olympics and remains the “Centre National d’Entrainement en Altitude” for athletes of all disciplines to this day. Small wonder it has been voted “Ville la Plus Sportive 2009” by the sporting magazine L’Equipe. And what a wonderfully healthy resort in which to enjoy being sportive. The high altitude Mediterranean climate combined with a low level of pollution, plus sparkling snow and fairy tale pine forests, make sporting exertion positively delightful. With 3000 hours of sunshine a year, fabulous views over the Pyrenean peaks and situated on the high Cerdagne Plateau in the heart of the French Pyrenees, Font Romeu is the perfect winter holiday resort. 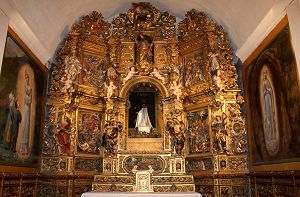 As well as a lively local life to enjoy there is the fun of visiting the Spanish enclave of Llivia, a curiosity formed in 1659 at the signing of the treaty of the Pyrenees when the present day borders were formed between France and Spain, Catalonia South and Catalonia North. After centuries of fighting and disagreement the Pyrenees were named as the true border bringing Roussillon, the Vallespir, the Conflent, Capcir and thirty-three villages of the Cerdagne under French rule. By a strange quirk of fate it was decreed that Llivia, in the Cerdagne, was not a village but a town and so there remains, inside France, a small enclave of Spanishness.

For those dedicated to relaxation there are the natural hot baths at nearby Llo, Dorres or St Thomas. In Font Romeu the casino/cinema/disco adds glamour and the town is full of hotels, bars, restaurants… and… sports shops… Tourist Office:04 68306830.

The name Font Romeu signifies “Pilgrim’s fountain”. According to legend, Notre Dame de Font Romeu was discovered by a cowherd whose bull was scratching at some water and bellowing loudly. The cowherd went to investigate and found a statue of the Virgin. The Fountain of the Pilgrim is to be found in the chapel of the XVII Hermitage at the top of the town and can be visited by checking times with the Tourist Office.

The fountain immured in the walls of the chapel fills an interior basin in which the pilgrims bathe. Sunyer is responsible for the magnificent altar. 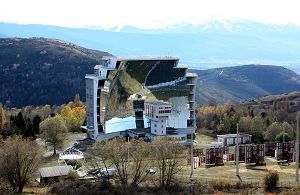 It is to Odeillo one has to go to visit the Four Solaire. Created by Felix Thrombe in 1969, 63 heliostats direct the rays of the sun onto a parabolic mirror of almost 2000 square metres. The solar energy can produce temperatures in excess of 3200 degrees Centigrade. There is a permanent exhibition on renewable energy and the role of the Four Solaire in scientific research. 04 6830 7786

The immense parabolic mirror, tall as the Arc de Triumph in Paris, reflects the countryside and sky, giving an ever changing patchwork view of the surrounding countryside that is beautiful and fascinating to watch

Developed as a ski resort as early as 1921, the linked ski area of Font-Romeu and Pyrenees 2000 is the largest artificially snow covered ski-area in Europe with the biggest snow making machine in the Pyrenees. The combined area has 26 lifts serving some 53 kms of pistes. There are 36 runs: 11 green; 7 blue; 7 red; and 3 black. Vertical drop is 563m. Click here for a readable piste map.

There are two ski schools Ecole du Ski Francaise (ESF) and Ecole de Ski Internationale (ESI). As well as offering a range of instruction both ski schools can look after young children (from age 3) – the ESF in its Jardin d’Enfants “La Marmotte” and the ESI in ‘Les P’tits Indiens”.

The facilities for going from total beginner to your first green/blue run are excellent. There are beginners’ areas of progressive inclines served by easy drag tows (téléskis) from which you can move on to a chairlfift – the friendly kind that slows down for getting on and off (télésiege débrayable). Alternatively there is also a double drag lift. These lifts take you to the Gallinera area from where you can take a green or a blue slope back to Les Airelles, or blues all the way down to Pyrénées 2000 – a much longer run (and remember to leave time for getting back). The gradients are steady with no nasty surprises.

At the time of trying out the resort, there was very little snow so I was unable to check out many of the runs – for instance, none of the runs from the Roc de la Calme. The one black that was open (from Gallinera down to Aveillans) was not too demanding and the couple of reds were similarly straightforward.

There are also numerous superb marked hiking trails taking in some fantastic countryside to explore.
In the Mediterranean sun, the untouched snow offers beautiful spaces suitable for snowshoe trekking: quiet forests, frozen lakes, panoramic views… Putting on snowshoes gives you access to an unknown universe and gives you the feeling of being part of the wild. Outings in snow shoes are organised everyday. Go for half a day, a full day and even include a night stay in the mountains! Choose the level of difficulty, and leave your footsteps in the powder snow! Snowshoe trekking has no limit: do not limit yourself!

“After a day on the slopes, why not visit the Roman hot spring-water spa baths at Dorres where you can lay in the hot waters surrounded by snow looking out over the Cerdagne Plateau into Spain? Or try the Bains de Saint Thomas at Fontpedrouse, close to Font-Romeu, the Bains de Dorres, about 10 miles from Font-Romeu, or the Bains de Llo, about 25 km from Font-Romeu.”
“The St. Thomas one is VERY GOOD (3 pools and a sort of mini-amphitheatre) and had some pampering facilities as well. The dress code can be strict at times I hear (no shorts – speedos only). It is not expensive, (unlike say Caldea in Andorra which is a treat, and well worth it !)”
“Above St Thomas there is a great Spa Sauvage. Idyllic mountain stream with steam rising above the trees. No fee, no changing rooms or showers, no dress code, or a ‘no-dress’ code as suits you.”
“I go to Pyrénées 2000 most years, easy to rent all equipment and free parking.”
“If you show your day pass to the Spa at St Thomas you get a discount. ”