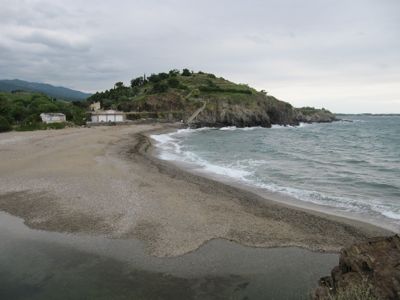 Anyone that loves the rocky scenery of the Cote Vermeille will enjoy this popular, short and fairly easy walk.

It starts at the very end of the Le Racou road behind the beach, near the car park, where the flat sandy landscape gives way to rocky hills.

Initially you head east along a paved driveway, then you have the option of doubling back west to follow the path to the top of a wooded slope where you can find the “table d’orientation” overlooking Racou beach and back towards port Argelès. In good weather it can be a lovely vantage point. 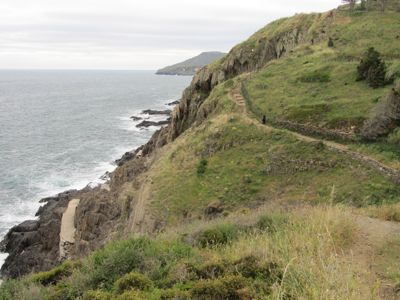 Heading back east, continue following the footpath, which quickly plateaus out along the top of the coastal hill and meanders down into the next cove, the Anse du Portell, which is shingle-covered and very secluded and pretty.

On the way you can admire the easterly aspect of the Alberes hills and up to the impressive tower at Madeloc.

The steps are cut into the rock in places, and look almost like a fantastic and very convenient natural feature!

After climbing the rocks next to the little house at the end of this cove, you follow the well-marked path along the top of the low cliffs.

You have to pass through a gate at the camp-site of les Criques du Porteils, and weave along the top of the cliffs with the camp-site to your right and the waves crashing dramatically on the rocks below to your left, until you descend to the Plage de l’Ouille.

Draped over the cliffs are huge curtains of succulents and cacti, which were flowering beautifully when we were there. 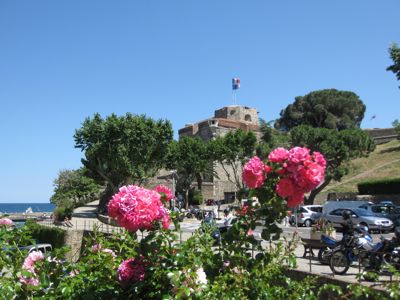 There is a creek at the eastern end of the beach, which after heavy rains can be difficult to cross, but in May we were able to jump it without even getting our feet wet.

The old sea-level cliff path to Collioure has been closed, it is so weather-damaged as to be dangerous, so another climb from l’Ouille takes you upwards to the highest point in the walk.

You traverse (quite safely) above more cliffs where you can look down at the crystal-clear water between the rocks, so popular with boatloads of divers that look like families of strange seals.

You pass below the intriguing Fort Carré (1758) perched on top of the hill, across the grassy slopes until you reach Fort Miradou, the northern-most part of Vauban’s defensive wall of Collioure.

Unfortunately you can’t enter this active military base, so you have to turn inland through the car park and walk down into Collioure along the Route du Pla de las Fourques. Happily it isn’t a busy road and you soon arrive in the back streets amongst the art galleries and cafés.

After a stop for lunch, or just a refreshing ice cream, you can set off back towards Racou for the return journey. The part of the path through the campsite is closed from 22h-08h, presumably to allow the campers a bit of peace after dark, so do check before you go that you won’t be stuck once the gates are locked!