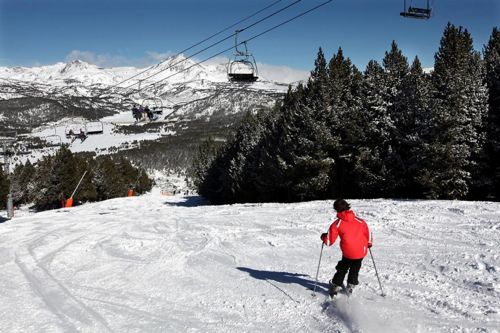 Martin Fourcade, a 26 year-old, tall (184 cm) non-commissioned officer of the mountain infantry brigade at Chamonix, emerged from the 2014 Sochi Olympic Winter Games as the new star of biathlon, with three medals, two gold and one silver.

Moreover, one or more French biathletes finished in the top 12 spots in 10 of the 11 biathlon events of the Games. In France, where skiing is a mainstream winter sport – nearly a fifth of the population skis – there are centres of excellence for the competitive skiing disciplines. The one for biathlon is at Font Romeu in the PO. Why there, in a mountain town on the Spanish border, as the crow flies 85 kilometres west of the Mediterranean Sea?

The answer lies in history. Font Romeu is the second-oldest ski town in France, after Mont-Revard in the Savoie Department of the Rhône Alpes Region near the Swiss border south of Geneva. Its development started more than 100 years ago and took place in three phases like those of other European resort towns established in the late 19th and early 20th centuries. 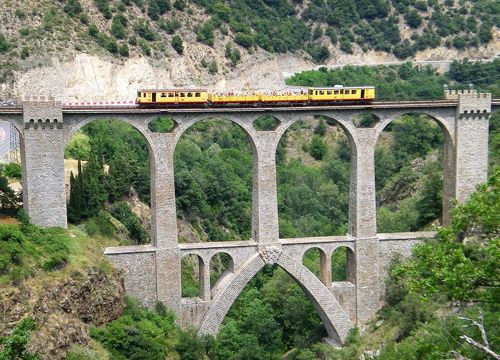 First, the Train Jaune (“Yellow Train”), the colour of its rolling stock, one of the two of the flag of Catalonia as well as of the PO to the north in France, through which it runs, connecting the mountain towns with the PO chef-lieu at Perpignan and other cities and towns of the flatlands to the east.

Building the line was no easy task. The tectonic claw that gave birth to the Pyrenees left a comb of spurs and ravines that the line had to cross, requiring 65 bridges and viaducts, more than one for every kilometre its 62.56 km permanent way length.

With time, motor vehicles on roads took over much of its original traffic, but Train Jaune remains a commuter line as well as a ski train. Whenever winter snows close roads, it stays open, because it has snowploughs, which are not ordinary road maintenance gear in the sunny Pyrénées-Orientales.

Accommodations came next. Font Romeu is at high elevation, 1312 to 2213 metres above sea level, and enjoys 300 days of sunshine a year. Clearly, it had potential as a resort.

And grand it was when opened 28th July 1913, with 200 rooms, apartments, elevators, electric lighting, an American bar, a casino, a garage and a shuttle bus service to the railway station. It soon became the place to be seen in high society on both sides of the nearby Spanish border.

Among its guests were the Spanish royal family and famed painters Pablo Picasso and Salvador Dali.

The third and final phase brought in winter sports that were increasingly popular with holidymakers.

In the winter of 1920, the Hotel offered its first winter program of skijoring, figure skating, luge, bobsleigh and curling. By coincidence, 1920 also was the year in which skijoring, an alteration of the Norwegian ski kjøring (literally “ski driving”), the pulling of a skier over snow by one or more horses, was first mentioned in print in English in the 17 March issue of Punch. 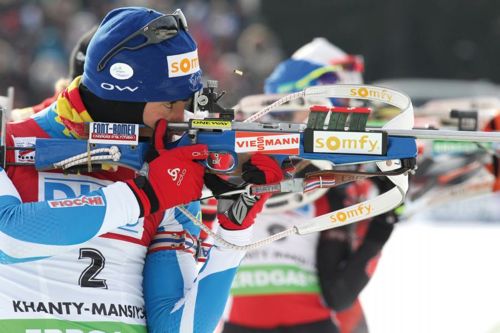 Today, Font Romeu is a busy ski town, twinned with the neighbouring Pyrénées 2000 resort to offer 60 pistes served by 25 lifts, and 110 kilometres of cross-country ski trails.

The French national centre for biathlon was set up there, as biathlon was and still is the competitive snow sport of choice in the PO. In the summer of 2013, the French biathlon team was in pre Olympic season training there.

Even though the 2014 Winter Games were to be held in Soci, Russia, the Russian team also chose Font Romeu for summer training, both for its biathlon facilities and because Centre National d’Entraînement en Altitude (CNEA) (“National centre for sports training at altitude”) is located there.

The development of Font Romeu that started more than 100 years ago proved so successful that in 2002 a case study of it was published.

Other changes in the century that Font Romeu has been a destination resort are visible in the landscape. The Grand Hotel still towers above the town. But in 1975 it closed down and was split up into apartments.

The abundant sunshine that triggered the evolution of Font Romeu as a resort also contributed to it becoming a centre of solar energy science. The world’s largest solar furnace was built in 1970 in neighbouring Odeillo

Yet the impact of history prevails. The name Font Romeu is older than that of any other French ski town. It comes from the name of the Hermitage there.

L’Ermitage de Font-Romeu that was built in the 17th and 18th centuries, on the site of an oratory first built there in 1035. Local legend held that a bull pawing the ground had uncovered a statue of the Virgin, and a fountain came forth marking it.

Catalan pilgrims on El Camiño de Santiago, “the Way of St. James” in English, to Santiago de Compostela in north-western Spain stopped at the holy fountain.

Their stopping gave the place its name: Font Romeu means “fountain pilgrim”. In the mid 11th century, pilgrims from beyond the Pyrenees began following La route de Saint Jacques de Compostelle as it’s known in French, which put Font Romeu on the map of Medieval Europe.

To this day, El Camiño de Santiago remains a famed pilgrimage route, sensitively described in actress Shirley MacLaine’s book, “The Camino: A Pilgrimage of Courage” (London, 2001, Pocket Books, ISBN 0-7434-0921-3). And the meticulously preserved Hermitage at Font Romeu is still a stop on the Camino.

Biathlon is a competitive winter sport that combines cross-country ski racing and rifle shooting on fixed ranges. It originated in the mid 19th century in Norway as an alternative training for the military.

It was first contested at the Olympic Winter Games (OWG) in Chamonix in 1924, and again demonstrated in three OWG, but did not become part of the Games programme until the OWG at Albertville in 1992.

Its rules originally reflected its military origin, with 30 calibre rifles used on ranges of 100 to 250 metres target distance. In 1978, rifle calibre was reduced to .22 and target distance to 50 metres, which made biathlon more suitable for inclusion in ski meets.

There now are biathlon events for both men and women, including a mixed relay. For further information on biathlon in France, visit the French biathlon website  (in French only). For information in English (as well as in German and French), visit the International Biathlon Union website.