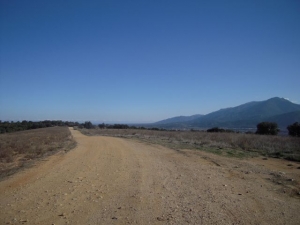 Happy New Year!
And dare I add that I’m so glad it’s all over? At the risk of sounding like Madame Bahumbug, I have to admit that it hasn’t been the most festive Christmas I’ve ever spent – and many of you will be happy to hear that I haven’t managed a go on the karaoke yet…. but please don’t assume it’s safe to come out of the water yet. Oh no, no, no. It aint over til the fat lady sings. 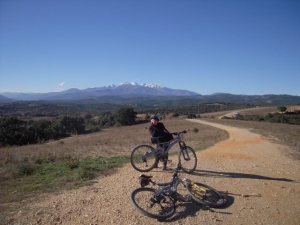 The girls are back in town this weekend. My singing sisters of several years, who I met on the forum and with whom I have remained firm friends ever since, roll into town on Saturday and we will be painting Thuir, if not red, a lurid pink, as the streets come alive with the sound of music. We have never been thrown out of a restaurant yet, but the year is still young. Looking forward to a glass or two of wine and exercising these rusty old tonsils! Brits abroad eh – we invented them!

The New Year really started for me on Sunday 2 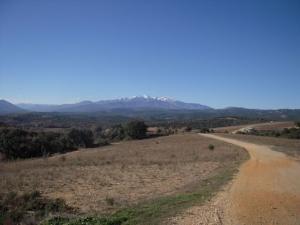 nd January when Olivier and I managed to ditch the Dad, and sneak out while he was snoozing. We grabbed our bikes and headed for the hills behind Céret with a sandwich and a thermos of Heinz tomato soup. Totally puffed out climbing to the top of the world from the Saint Jean/Vivès side of the main road from Le Boulou into Céret but WOW when we got there. Click on the photos and look at the view over Canigou and out along the Albères to Argelès and the Med – and tell me how it can get much better than this. Felt all the Christmas stress melting away in the warm sunshine – and burnt the end of my nose!

It’s been a bit chilly over the past couple of days, with a bitter Tramontane nithering yer barnacles, but clear and dry nevertheless, with a tired sun doing its best to compete with the wind and raise the tiny temperatures. All in all, January has been pretty fantastic. Last week we met up with friends in Roses, in Spain, and actually sat outside on the sea front to dine in glorious sunshine. I try to never let myself forget how lucky I am, and these are the things that remind me. 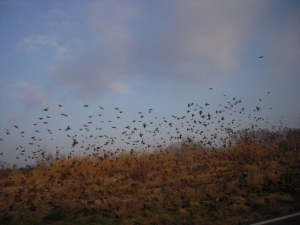 On the way back, our view was nearly obliterated several times by clouds of starlings, casting enormous shadows over the car – very Hitchcockesque and eerie. Did you know that each starling produces one gramme of poo per day, according to ornithologists? Times that by the hundreds and thousands of ’étourneaux’ that darken our skies in winter, and that’s a whole sh-tload of bird poo.

I also tried to take some photos of the local ladies of La Bonquera who were out in droves, Sunday being trucker rest day. Did you know that lorries over 7.5 tons (apart from refrigerated ones which have special dispensation due to to the delicate nature of the goods being transported) cant travel on French roads and motorways every weekend between the hours of 10 p.m Saturday and 10 p.m Sunday and from Saturday 7 a.m. to Sunday 10 p.m. from early July to mid August? They are also banned on public holidays, normally from 10 p.m the night before, until 10 p.m on the holiday itself. Anyway, on this lovely sunny day, there was a multitude of ladies touting their wares and negotiating prices in front of our very noses, so I decided to take a photo or two. Olivier put his foot down on the gas, totally embarrassed, so I kept missing, making me of course even more determined. Doesn’t he know me better? Of course, I’ve blurred them out, just in case she is someone’s wife and he is someone’s husband, but it is quite fascinating how this is just a job, a way of life… and you have to wonder how she got here. Did she make a conscious choice? Was she kidnapped and forced into prostitution? As many of these ladies are from Eastern Europe, was she tempted by the promise of a better life? And is it better? It’s easy for us to judge, but I have never been starving or watched my family starve. Would I go on the streets if it was the only way I could help them? Yes, I think so, tho Olivier says I wouldn’t make much money as I probably wouldn’t stop talking long enough to ’do the deed’. Apparently, some of these girls earn more than 1,000 euros per day, (tho I dont know how much of that goes to their ’manager’) and were born and raised in the La Jonq – Girona area but have chosen this as an alternative to a minimum wage stocking shelves in the local supermarkets.

Considering that the borders are now supposed to be non existant, there was an exciting looking kerfuffle going on as we arrived in Le Perthus, lots of blue flashing lights. As I tried to take a photo of the armed Spanish police stopping traffic, Olivier finally gave up even talking to me.

Le papa is back in Leeds for the time being, having a rest from us. When I took him back, it amazed me that day never quite seemed to break – it was dark and depressing for most of the day. I had forgotten how much the weather out here contributes to my daily well-being and optimism. Very easy to lose sight of all the good things in life when there is nothing to brighten your day. Poor Dad is very lonely. Growing old is so sad. I know it happens to us all, but if we are lucky, we grow old with a partner to water down the bad and share the good. He only has us, and an irritable and bossy daughter doesn’t really compensate for a loving wife or companion. Love you anyway Dad, even if I don’t always act like I do.