In our glorious Mediterranean waters you’ll never swim alone. From rainbow wrasse and damselfish to octopuses and sea cucumbers, there’s plenty going on beneath the waves – if you look. You’ll need to snorkel or scuba dive for the best underwater experience, but even if you’re only paddling, it’s wise to watch where you’re putting your feet! Three venomous beasts also float or lurk among the beauties.

These invertebrate “sea hedgehogs” are impossible to mistake for anything else, and are usually found in rocky areas. Some bigger species bury themselves deep in the sand, however. Those spines will break off into your sole if you step on one barefoot.

The pain is said to be bearable (like having walked on splinters). Advice seems to consist of soaking your foot in water as hot as you can tolerate for 30-90 minutes. Spines can be removed with tweezers.

Prevention is best. Wear sandals if you’re only paddling. And don’t try to pick one up with bare hands.

If you are stung by a sea urchin, you could get your own back by eating some of its relatives. They can sometimes be seen for sale on quaysides in towns like Port Vendres – split open to reveal their fluorescent orange soft centres. In Palafrugel (near Girona) they have an urchin festival (la Garoinada), which runs from around mid-January to end March. If a plate of raw gonads floats your boat, bon appétit!

No such festival for our next beast.

Its English name makes it sound innocuous, while the French Vive reflects the level of pain inflicted by its poisonous dorsal spine: Intense.

Vives like to partially bury themselves in sand, often near beaches, leaving just their eyes and the tip of the first dorsal fin exposed. They’re not deliberately out to get you but don’t appreciate being stood upon (hence the glum expression?) and will punish you severely. The acute pain is said to last around 20 minutes. Although the venom itself isn’t considered lethal, there’s a danger the agony could cause drowning.

If stung by anything in the sea, GET OUT OF THE WATER ASAP!

Once on land you could ask a friend to urinate on the wound, but if you’d rather not entertain the whole beach this way, there are other remedies. Anti-inflammatory tablets should help and heat is said to reduce the agony of Vive venom. It’s best to soak your stung foot in water as hot as you can bear without scalding (with a little bleach added as disinfectant). Some brave souls apply a lit cigarette to the sting, but perhaps this might only substitute one painful injury for another?

Not all jellyfish sting, but this common species does have filaments under its bell that irritate skin, causing a burning sensation. Again, the main danger here is that a swimmer might panic and risk drowning.

Although reputedly less painful than a Vive fish sting, it will be very unpleasant for at least ten minutes. Anyone with sensitive skin may suffer for several hours. For jellyfish stings the recommendation is to soak the affected area in alkaline water or vinegar.

WARNING: We can’t vouch for any of these suggested treatments. Some people – especially children – may react more severely than others to any sting. If in doubt or if the wound shows signs of infection, seek medical advice.

Other Mediterranean creatures look strange but are harmless to humans and fascinating to observe if you’re snorkeling or diving. One of the richest areas for doing this on the Côte Vermeille is at La Réserve Naturelle Marine de Cerbère-Banyuls. It covers 6.5km x 2km of coastline between L’Ile Grosse and Cap Peyrefite. Since its creation in 1974, 650 hectares of sea have benefited from protection. Visitors must adhere to strict regulations (details on their website la-reserve-marine-cerbere-banyuls).

It’s best approached by boat if you’re lucky enough to have one. There are two designated mooring areas at Cap l’Abeille and l’Anse de Peyrefite.

From the beach at Peyrefite, between 1st July and 31st August, you can explore the sentier sous-marin. Underwater information panels helpfully describe the five ecosystems you’ll visit in this 250m stretch. 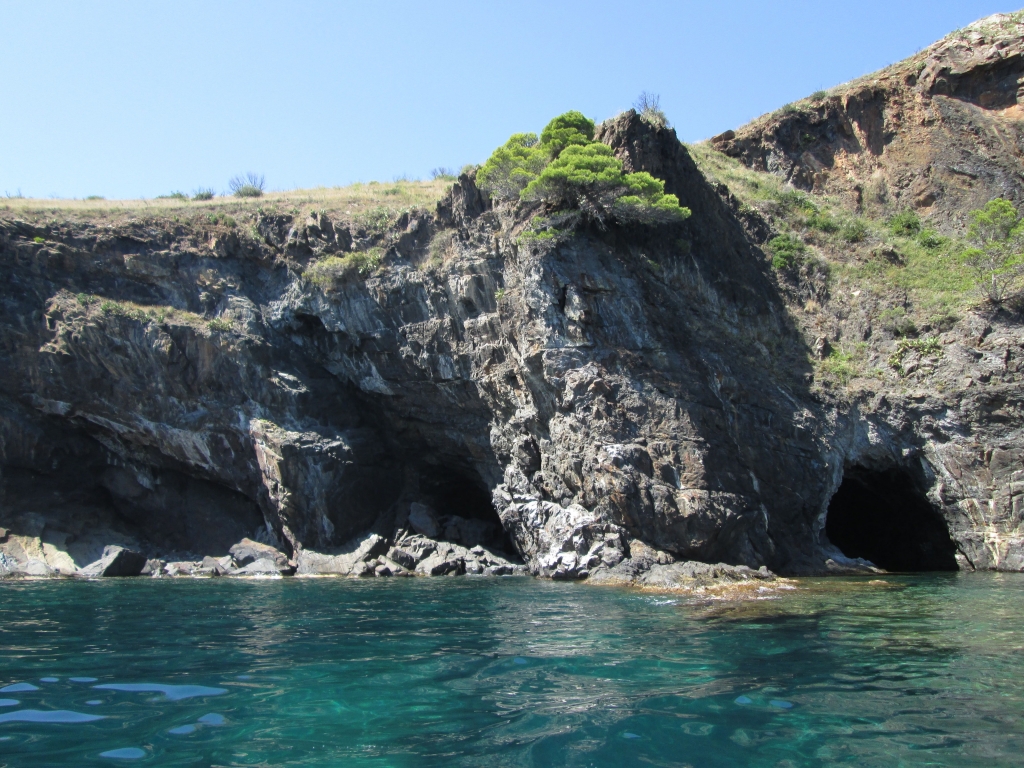 One entrancing sight can be an OCTOPUS (POULPE) jet-propelling itself away from you or undulating over seabed or rocks – changing shape and colour as it moves. 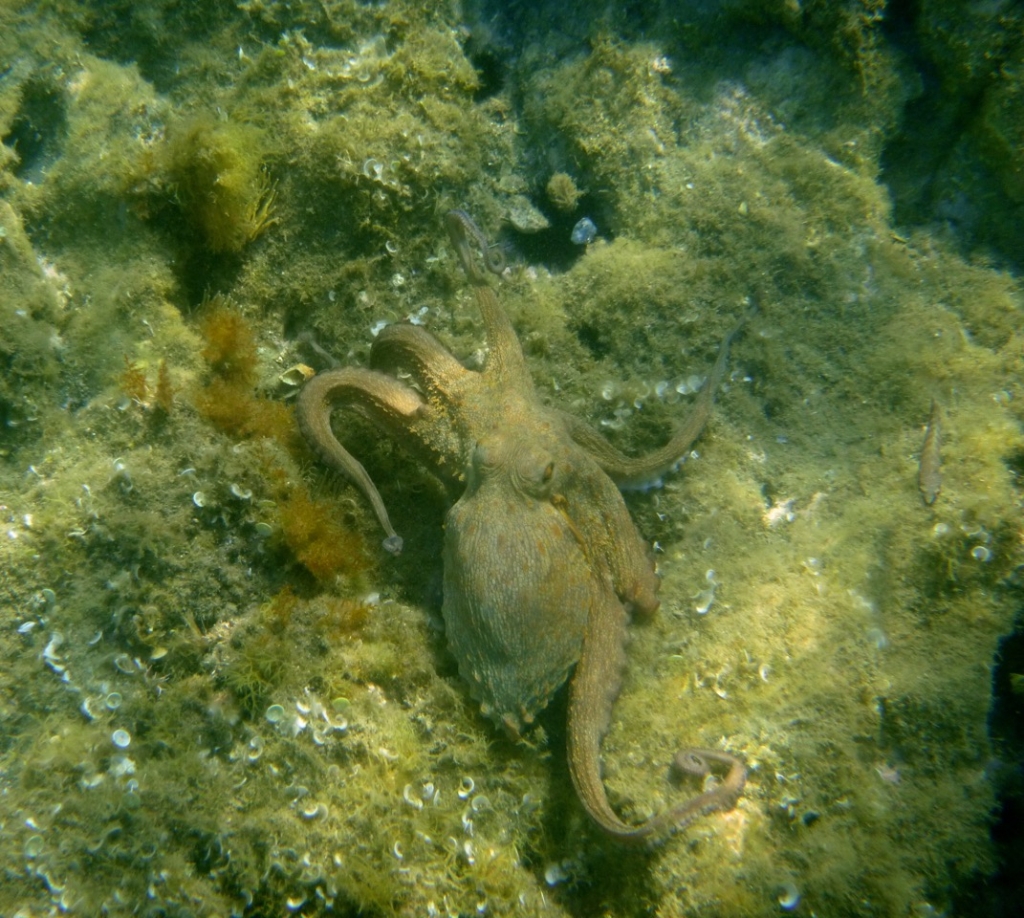 SEA CUCUMBERS (CONCOMBRES DE MER) can be hard so spot and arguably less fascinating because they’re usually horizontal and doing nothing! This one, however has reared up – not in a display of cucumberly aggression but in order to spawn. 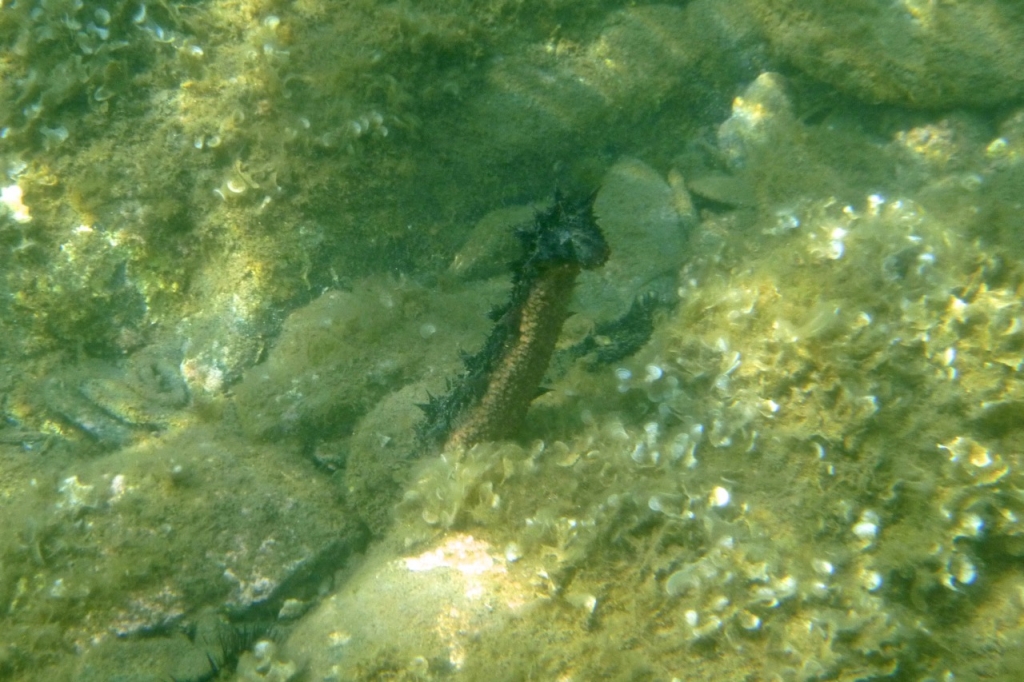 You may find yourself surrounded by spectacular shoals of little BLUE DAMSELFISH (DEMOISELLES BLEUES). 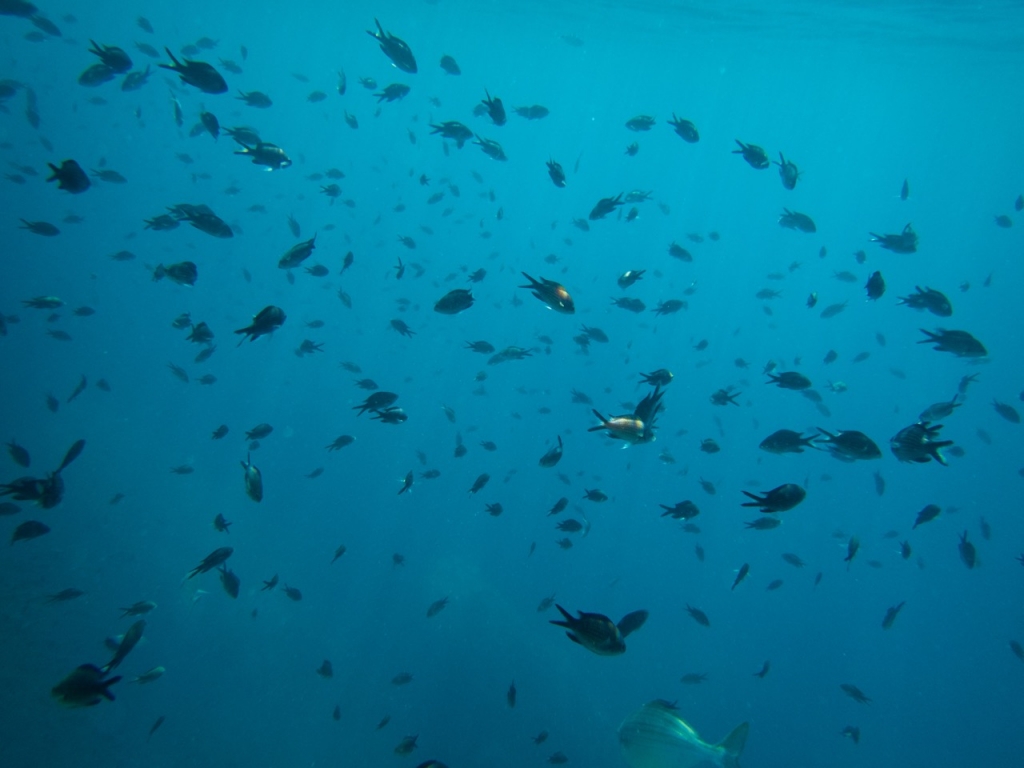 SADDLED BREAM (OBLADES) might hang around the hull of your boat. 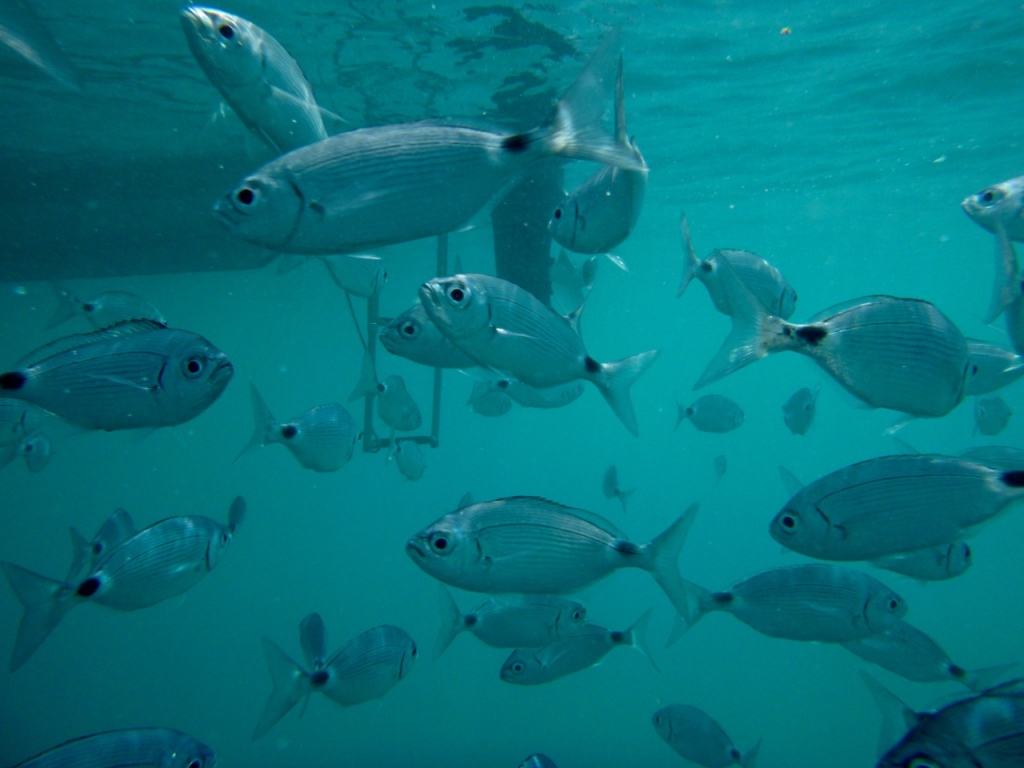 You’re almost guaranteed to see other bream species, including pretty SALEMA (SALEMA) in close-packed shoals working over the weed and general gunge on the sea floor. 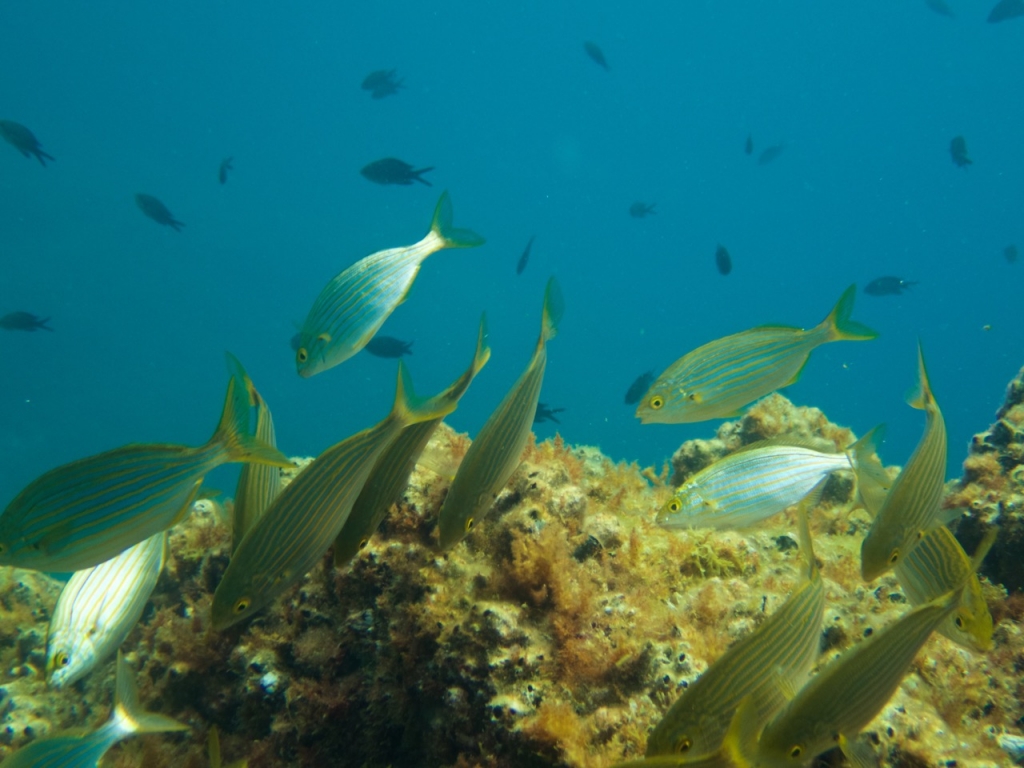 Sometimes larger fish leap out of the sea in dramatic fashion near boats; more rarely, dolphins (dauphins) appear in the distance. Although you can’t expect to swim with those, you can delight in a close experience with many other species that grace our warm Mediterranean waters.

Photos by “The Warblers” unless otherwise stated.