Carole Delga has announced the creation of a ‘marque ombrelle’ to be known as ‘Pays Catalan’ – a term that has already been used for many years by many of the tourisme agencies of the region when referring to the Pyrénées-Orientales. 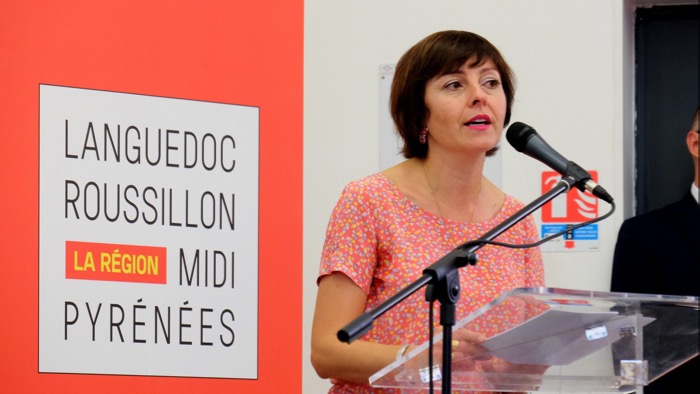 This ‘marque’ or brand name to promote tourisme and local industry is being seen as an attempt to distill the disappointment and dissatisfaction amongst Catalans, over the changing of the regional name to Occitanie. In the future, this new name could replace the present ‘Sud de France’ label.
Whilst the Chamber of Agriculture sees possibilities in promoting fruit, veg and livestock in the way, it reminds the region that inventing and creating a whole new brand name is likely to cost ‘la peau du cul’.

The winner of the competition to design the logo for the new region of Occitanie was announced this week.

Léa Filipowicz, 22 year-old Gersoise (from the Gers ) and graphic designer was the winner…….and here it is!

Think I preferred the original. How about you?

According to the new movement ‘Oui au Pays Catalan’ the future, economy and identity must not be allowed to disintegrate. To this end, a meeting will take on place Saturday, October 15 at 15h at the Mégacastillet Perpignan.

‘Oui au Pays Catalan’ are demanding a ‘Statut de Collectivité Territoriale Unique (CTU’) for the Roussillon, Conflent, Vallespir, Cerdanya, Capcir and Fenouillèdes, with a name that is recognized, and identifies the region…..
Interested in following the shenanigans?
CLICK HERE TO FIND OUT MORE

Catalans are rarely backwards in coming forwards where the honour of Catalonia is at stake, and the new name of the administrative region has ruffled more than a few feathers!

In 2005, Georges Frêche became President of the Regional Council, and immediately recommended that the region revert to its ancient name – Septimanie. Sounds a little like an infectious disease n’est-ce pas?

Protests throughout the region and a petition of 45,000 signatures made it clear that the change would be somewhat unpopular – so Languedoc Roussillon it remained.

Ten years later, in an attempt to reduce bureaucracy, the 22 administrative regions of France have been cut down by nearly half, into ‘super-regions’, and Languedoc Roussillon has merged with the Midi-Pyrénées and is no more. Welcome to L’Occitanie – with a ’subtitle’ of ‘Pyrénées-Méditerranée’ below.

The name Occitania itself is a historical reference to a large part of southern France where several different versions of Occitanian French (‘les langues d’oc’) were spoken,right up to the nineteenth century.

But despite the fact that ‘òc’ means ‘YES’ in the langue d’oc, many true Languedocians are joining the Catalans in saying NO, disappointed at the spreading around and watering down of their own particular

Given the strong regional identity of the Roussillon, French Catalonia, it was never going to slip easily into a new name, particularly one with no reference to ‘Catalan’. In the words of the song…. there may be trouble ahead.

In the 12th century, Catalans already had a well developed sense of identity and pride. This ancient Catalan oath of allegiance was sworn by the leaders of the council to the monarch of Catalonia and Aragon..

who are as good as you

who are no better than we,

to accept you as our king and sovereign lord,

provided you observe all our liberties and laws;