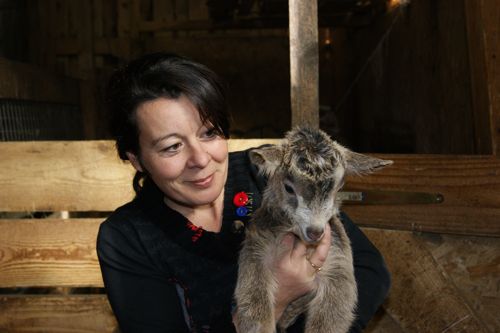 The giant larder that we live in, otherwise known as the Pyrénées-Orientales, is full of passionate people producing local delicacies from the land and sea which surround us. We think they should be celebrated for keeping old traditions alive in the face of the trend towards the mass production of food and the ever-increasing power of the hypermarkets. This new series of articles introduces you to some of them.

Marie-Line and Pascal Guillemand have been running their goat farm and producing cheese for 8 years. And that’s after Pascal spent a dedicated and rather impressive 15 years as an apprentice learning his craft. Suffice to say, he knows a bit about goats. 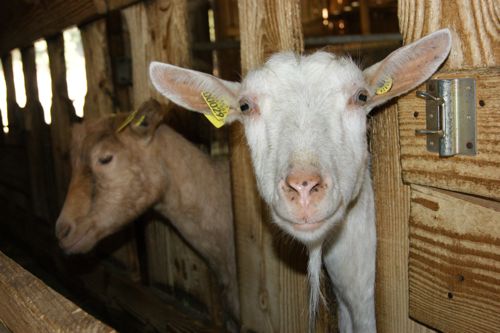 The farm is located in a stunning spot, high up above the village of Reynes in a mini valley, which was drenched in sunshine on the January day I visited. Marie-Line and Pascal live in a modern house with the fromagerie on the ground floor where it is cool. The goats live in the goat shed and adjoining pasture a stone’s throw from the house.

We headed here straightaway to meet the herd and I immediately fell in love with the throng of kids who rushed up to say hello. They were all less than 2 weeks old and the newest arrivals had been born that very morning.

They were already on their feet and separated from their mothers. This separation is Pascal’s least favourite aspect of the job although both mothers and babies seemed pretty content. All the animals are given names and clearly much loved by their surrogate human parents.

There are around 60 nanny goats on the farm, an impressive harem for the two bucks, Ice Tea and Moka, who by all accounts have a field day during breeding time in August. They take it in turns to be let loose in the dark with all the females and no doubt pandemonium, and mass impregnation, ensues. Lucky bucks !

Five months later, the kids are born in January and February. The early milk is used to nourish them so at this time of year milk production, and therefore cheese production, is very low. It ramps up over the course of the year, peaking in une/July.

While my head was busy romanticising this pastoral idyll and the romantic life of a goat farmer, Pascal brought me back down to earth by talking me through the reality. Both he and his wife work from 5am to 7pm every day. The workload is heavy and varied : they are not only farmers and cheesemakers but also salespeople. And there is the inevitable mountain of admin to wade through.

The goats are milked twice a day and from February to November cheese is produced every day. One litre of milk produces approximately 100g of cheese and at the height of milk production, 1 goat might produce enough milk for 2/3 cheeses per day. This could be increased but the farm chooses to focus on quality over quantity. 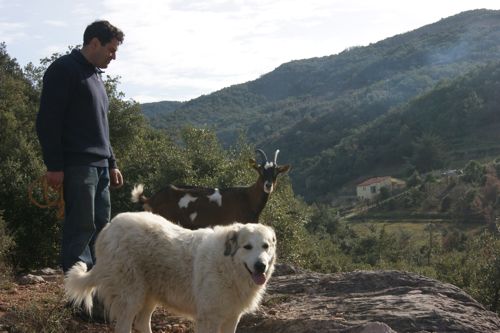 The goats are also « walked » daily for around 3 hours a day from March to September. As most of the goats were recovering from their recent ardours of giving birth, we took just the two bucks and a female called Pinto up the mountain for a little walk. This is Pascal and Marie-Line’s favourite part of the day and it was lovely scrambling up the paths in the mountainside and appreciating the views of Reynes village and the fields below. The bucks clearly loved it, locking horns in a play fight and nibbling on the oak leaves. It being winter, the pickings on the hillsides were relatively slim but they are spoilt for choice in spring and summer when the garrigue bursts into life with spring flowers, wild rosemary and thyme. 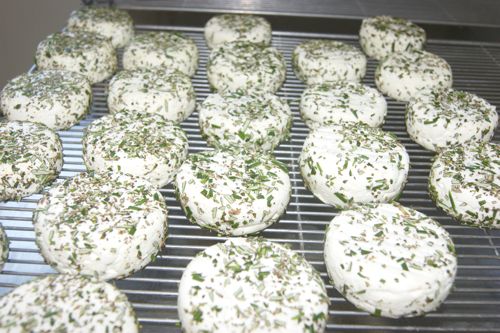 This grazing on the garrigue is an important part of the cheesemaking process. What the goats are gobbling is key to the flavour of the cheese so spring cheeses have a floral flavour, summer ones are more herbal and later in the year the flavours will have a more earthy autumnal flavour. In addition to grazing, the goats are fed on GM-free cereal and in spring, they are treated to special hay called foin de crau which comes from the Camargue and is the only hay in the world to have an appellation contrôlé ! It apparently gives a lightly salty, floral flavour to the cheese.

After our walk, Marie-Line and Pascal showed me the fromagerie where the cheese is produced. A tray of perfectly formed, rosemary coated cheeses sat there tantalisingly under an open window. Pascal explained that the light breeze was naturally drying out the cheeses. These babies are 100% organic, produced using centuries-old traditions with not a sniff of an artificial additive in sight.

Each day the fresh milk is brought up to the dairy by hand in milk churns and left to stand for two hours. The whey from the previous day’s cheese is added to the milk and it is left for 24 hours during which time it solidifies. Next, a small amount of salt is added and the cheese is ladled by hand into individual pots. Holes in the bottom of these allow the liquid whey to drain away leaving the solid curds which become the cheese.

The basic cheese is used as to produce different varieties. Some are aged over different periods, others are rolled in herbs or peppercorns. On Fridays (St Cyprien), Saturdays (Céret) and Sundays (Collioure) Pascal and Marie-Line don their market trader hats to sell the cheeses. They also supply some of the region’s best restaurants and delis as well as Perpignan’s Bar à Lait. Prices range from 1.50 euros to 5 euros, which seems like a bargain when you consider the quality and the amount of work – and love – which goes into producing them.